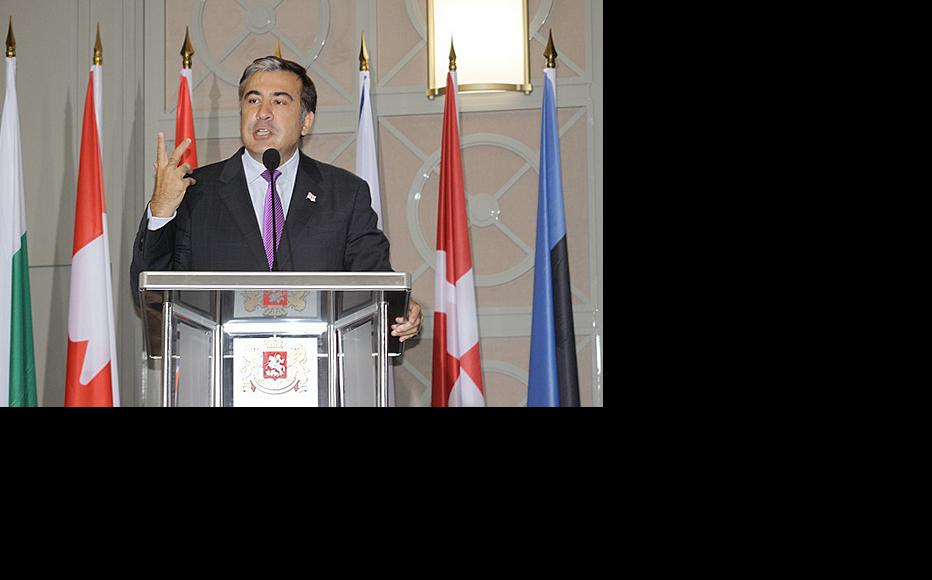 Mikheil Saakashvili in 2012, during his time as president of Georgia. (Photo: OSCE/Flickr)
The link has been copied

Georgia's current leaders have expressed disquiet at the growing number of opposition figures taking up senior posts with the Ukrainian government.

The latest appointment came on February 16, when Ukrainian prosecutor general Viktor Shokin announced that David Sakvarelidze, a lawmaker from Georgia’s opposition United National Movement party (UNM) had been hired as his deputy.

Sakvarelidze, who was Georgia’s deputy chief prosecutor general, will now lead reforms in the in the Ukrainian service, oversee human resources and work to harmonise the system with European Union mechanisms.

The move infuriated the current Georgian government, who are seeking Saakashvili’s extradition on charges of abuse of office.

Ukraine’s ambassador was summoned to the Georgian foreign ministry to explain this and other appointments. Georgian prosecutors have asked their Ukrainian counterparts to comply with the extradition request.

Tbilisi is also seeking the extradition of former justice minister Zurab Adeishvili, who is now advising Kiev on anti-corruption legislation.

Ukraine has refused to comply with either request.

The Poroshenko administration, tasked with taking action on widespread corruption and mismanagement, is trying to draw on the experience of the UNM government, which lost power in a 2012 parliamentary election. Saakashvili stepped down as president the following year.

While Saakashvili was president between 2004 and 2013, law enforcement underwent sweeping reforms, action was taken to curb corruption, and the economy was deregulated.

“It’s very sad. I find it regrettable,” Bidzina Ivanishvili, the billionaire founder of the Georgian Dream coalition now running the government, told the Kviris Palitra newspaper. “It isn’t a tragedy, but there’s nothing positive about it, I won’t hide that.

“Saakashvili played a central role in the errors that were made during the tragedy that was the August 2008 war. And it is of course dangerous that this individual is now in an advisory role there.”

Other recent appointments include Georgia’s former health minister Alexander Kvitashvili, who took up a similar post in Kiev in December; former deputy interior minister Yekaterina Zguladze-Glucksmann, who became the equivalent in the Ukrainian government; and Gia Getsadze, who held various senior positions in the Saakashvili administration and is now deputy justice minister in Ukraine.

Saakashvili told the independent Russian television channel Rain this month that many more of his fellow-countrymen were now working in the fields of justice and policing in Ukraine.

“It’s up to 100 people, and many of them are working in senior official positions,” he said.

Tbilisi is also concerned about the presence of Georgian nationals fighting alongside Ukrainian forces in the east of the country. There are believed to be several dozen, mostly former military or special forces personnel.

Many Georgians feel sympathetic towards Ukraine and see the ongoing conflict there as a disturbing reflection of their own situation. In August 2008, Georgia and Russia fought a brief war, after which Moscow swiftly recognised Abkhazia and South Ossetia as separate states.

Despite the cordial relationship with Ukraine, the governing Georgian Dream coalition has been infuriated by the hiring of so many leading UNM figures.

“I respect Ukraine’s sovereignty and I don’t intend to comment on its domestic politics,” President Giorgi Margvelashvili told reporters on February 17. “But I will also note that this situation is cause for some inconvenience.”

Commentators in Georgia say the government will need to tread a fine line between  expressing reservations about the use of UNM advisors and criticising the choices made by Ukraine's leaders.

“It is Ukraine’s sovereign right to hire whatever advisers it wants. The UNM always had close ties with Ukraine, but the principal factor is that its reforms in Georgia were generally successful and it has unique experience of reforming a post-Soviet state,” Korneli Kakachia, an associate professor in Tbilisi State University’s political science department, told IWPR. “The Ukrainian authorities are very well aware of the problems that existed under the Saakashvili government, but that’s totally unimportant to them.”

Kakachia said the fact that two former Georgian officials were wanted on criminal charges had caused some embarrassment, but pointed out that Ukraine was not the first country to refuse extradition requests from Tbilisi. France and Greece have previously taken a similar position.

“I think that in the context, it’s wrong to make harsh remarks about Ukraine, since it is a very important and strategic partner for Georgia,” Kakachia said.

Elene Khoshtaria, head of the think-tank Georgia's Reforms Associates, said party politics should not be an issue at a pivotal historical moment at which Tbilisi needed to show “support and solidarity”.

“Right now, the entire civilised world should be focused on supporting Ukraine and helping it maintain its sovereignty. Any decision the Kiev authorities take towards this end must be supported since the situation is so dramatic. It would be wrong to prioritise domestical political interests,” she told IWPR.

“If the Ukrainian authorities need help from anyone else, that help must be given, regardless of one’s sympathies or animosities,” she continued. “I can understand the legal aspect – the criminal cases brought against these people – but one needs to remember that international view differs from the Georgian one, and it comes close to holding that these people are being persecuted for political reasons.”

Kakha Gogolashvili, a political analyst with the Centre for European Studies in Tbilisi, said the extradition issue had already been dealt with and was in any case a legal matter, not a political one.

“The government should not make a big political campaign out of this,” he said. “It would be a mistake to enter into a confrontation with the Ukrainian authorities, who are clearly giving a major role to their Georgian advisers. A confrontation over this issue could be perceived as an attempt to obstruct [Ukraine’s] effort to consolidate, pursue reforms and repel the aggression it faces.”

Kakachia believes Georgia’s current leaders are afraid that opposition figures will make a success of their time in Ukraine. That would not only strengthen their position back home, but also invite people to take a fresh look at the Saakashvili administration’s legacy.

“They [the current authorities] have this internalised fear, all the more so since the current government is not particularly reform-minded,” he added.

Gogolashvili agreed that success in Ukraine could translate into a strengthened role for the UNM at home, allowing it to capitalise on economic and social problems and Georgian Dream’s dwindling popularity.

“If the reforms in Ukraine really bring swift and effective results, they will be held up as an example, and the role played by Georgians will be emphasised,” he said. “It will strengthen the [UNM] party’s position in Georgia.”

At the same time, Gogolashvili said, “it could also have the opposite effect – if reforms in Ukraine don’t succeed, this will of course will be used by the UNM’s opponents in Georgia.”

Tinatin Jvania is a freelance journalist in Tbilisi.