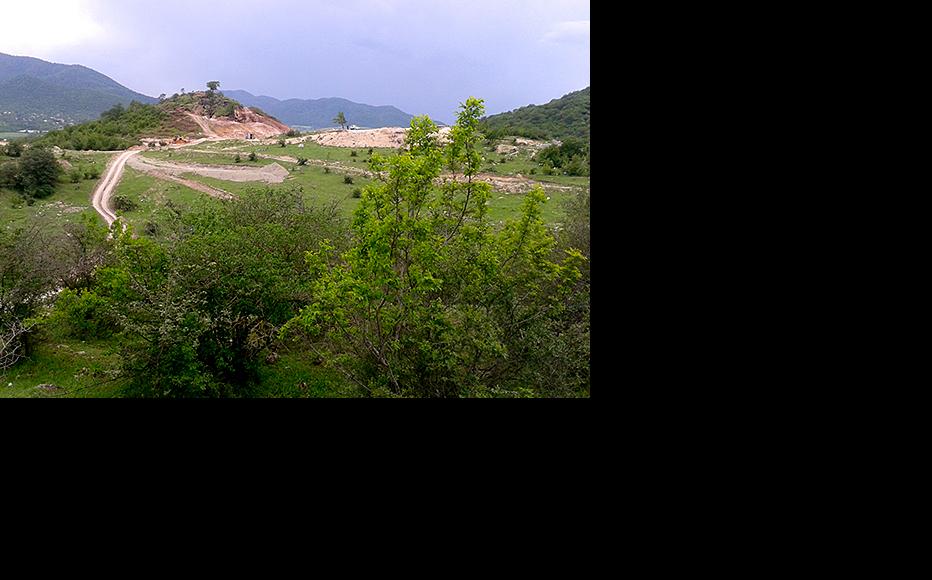 The Sakdrisi site in May 2014. (Photo: Heather Yundt)
The link has been copied

The site known as Sakdrisi-Kachagiani is a piece of land about 300 by 300 metres in size, located just under 100 kilometres southwest of the Georgian capital Tbilisi. It may not look like much, but international experts believe Sakdrisi is the oldest gold mine known to man, and thus of considerable archaeological importance.

Tunnels believed to date from before 3000 BC have never been fully explored, but thousands of Stone-Age hand tools and other artifacts have been found so far.

Sakdrisi has been the focus of a long-running dispute between the archaeologists and activists who want to protect it and RMG Gold, a mining company which is working on a larger territory of which the site is part. The company believes the Sakdrisi site may contain significant gold reserves and has sought permission to dig there.

In July 2013, Georgia’s culture ministry revoked Sakdrisi’s status as a protected historical site, granted seven years earlier. The decision was ostensibly taken because of a bureaucratic mix-up – the ministry claimed the document granting protected status had been misplaced – but it rapidly became clear that this temporary suspension of Sakdrisi’s special status might become permanent.

According to Marine Mizandari, who claims she was sacked as deputy culture minister because of her commitment to protect Sakdrisi, the process of delisting the site from protected status was set into motion in 2012.

“In late 2012, the government’s chancellery demanded that the ministry of culture compile information about the site’s status as a monument of national importance,” Mizandari said. “The company RMG Gold was considering buying the rights to explore the land surrounding Sakdrisi. For that reason, it petitioned the government to strip the site of its protected status. Sakdrisi’s status was revoked shortly thereafter.”

After widespread public outrage at the July 2013 decision, the culture ministry set up an 11-person commission to decide whether Sakdrisi’s special status should be reinstated. According to Mizandari, a list specifying exactly who should be included in the commission was provided directly to the minister.

When Mizandari suggested that other experts within the ministry might be more qualified to sit on the commission, her superiors told her that its composition was non-negotiable. She suspects the document came from the prime minister’s office, although it is unclear who provided the list of names.

Although the commission seemed to have been hand-picked to ensure that Sakdrisi was cleared for new mining works, its findings were not clear-cut. Two of the eleven members opted not to sign off on the findings, and several of those who did sign so left caveats scribbled in the margins next to their names, stating that the site was important enough to warrant further exploration and that works should be halted in the meantime. One signatory later asked to have his name removed.

It later transpired that several of the commission members had links with RMG Gold, which by that time had obtained the right to mine the area.

The Georgian National Museum, whose archaeologists had been working at Sakdrisi since 2004, complained no one consulted it for an informed view.

Despite the questions hanging over the commission, the government upheld its main findings, and decided not to restore Sakdrisi’s protected status.

Ever since, a battle has raged between the culture ministry and activists who oppose new mining at Sakdrisi. Two Tbilisi-based NGOs, the Georgian Young Lawyers’ Association (GYLA) and Green Alternative, have been at the forefront, challenging the ministry through the courts.

In January 2014, activists accused RMG of causing damage at Sakdrisi when it briefly began working there. The company was soon forced to put the work on hold pending another court ruling. But in March, before the hearing took place, the ministry gave RMG the go-ahead to launch open-cast mining. It said there was insufficient proof that Sakdrisi had been a gold mine in antiquity.

Amid the shock at this ruling, GYLA once again used legal channels to block an immediate start to mining.

Meanwhile, experts continue to insist that Sakdrisi was not an archaeological site of international importance.

“There is no doubt that this is the oldest goldmine in the world,” said Professor Thomas Stöllner, a mining archaeologist from the University of Bochum in Germany who has been working on Sakdrisi for a decade, together with colleagues from the Georgian National Museum.

The museum’s Dr Gambashidze explained,  “As soon as we started the project in 2004, we entered the tunnels and found old tools and artefacts. We then sent the artefacts to the laboratory of the Heidelberg Institute of Physics in Germany to test the date of the ceramics dated to 3000 BC. Many reports have been written on the subject in international scholarly journals.”

The dispute rumbled on through the spring of 2014, when  protesters camped out in a bid to block mining work. (IWPR reported on this in a radio piece called Greens and Gold Don't Mix.)

In June 2014, a court in Tbilisi ruled that the ministry’s 2013 decision to revoke Sakdrisi’s protected status was unlawful. The site was promptly relisted, and a decision taken to prohibit mining.

At this point, German and Georgian archaeologists entered into a dialogue with the government in Tbilisi about how to proceed. The general impression was that the two groups were close to reaching a compromise whereby archaeological excavations would take place, and commercial mining only after that was completed.

In December, however, the ministry again stripped the site of its special status and allowed RMG Gold to begin work immediately.

Everyone was taken by surprise, not least Professor Stöllner, who said in a telephone interview, “The Georgian government promised the international board of researchers and the Georgian National Museum that we could come up with a solution so that research could continue. We prepared proposals and budgets. Now suddenly this decision was made in December and the area is being destroyed. It is a real pity.”

The ministry’s abrupt move seems to have been prompted by a request made by RMG Gold for permission to “deconstruct” the site and remove historical artifacts, something it was within its rights to do despite the June 2013 court ruling prohibiting commercial mining.

The request was made in a letter from RMG to the culture ministry in early December. In response, the ministry called an emergency meeting of its Agency for the Preservation of Cultural Heritage on December 11.

Participants voted to remove Sakdrisi’s special status by four to two, even though RMG Gold’s letter had not requested this.

According to Sulkhan Saladze, a lawyer with GYLA, the list of people invited to attend such emergency meetings had been changed two weeks previously. Saladze believes this was done in order to ensure a favourable result.

Although the outcome was not binding, the ministry immediately ruled that Sakdrisi had lost its special protections. The same day, the company was granted permission to “deconstruct” the site.

“Although one ruling of this nature usually takes a month to complete, in this case five legal documents and nine legal actions were issued in just one day,” Saladze said.

Within 24 hours, explosions were taking place at Sakdrisi. The swiftness with which this happened raised a few eyebrows.

“It is impossible that the company could have planted the dynamite so quickly. It must have already known what would happen,” said Teona Macharashvili, another lawyer with GYLA.

Some observers argue that the use of dynamite means that what is going on is more than just “deconstruction”, and that no one is supervising the work to ensure it does not go beyond this.

Many suspected that senior government officials pushed for the decision because RMG Gold’s operating license was due to run out on January 1, 2015. Speaking on December 30, Prime Minister Irakli Garibashvili indicated that the permit would be renewed.

Garibashvili has previously argued that the benefits of commercial gold mining outweigh any threat to the site, whose authenticity as an ancient gold mine he has called into question.

According to RMG Gold's commercial director, Soso Tsabadze, the company pays more taxes than any other in Georgia and accounts for around ten per cent of total exports.

Opponents of commercial mining are currently petitioning the government and appealing the decision through the courts.

Archaeologists hope that if blasting can be stopped, some of the old mine shafts could still be saved.

“The mines go down 30 metres,” Professor Stöllner said. “It is possible that not everything is destroyed and we could continue working.”

Cristina Maza is a freelance journalist.

Georgia
Rule of Law, Economy
Connect with us