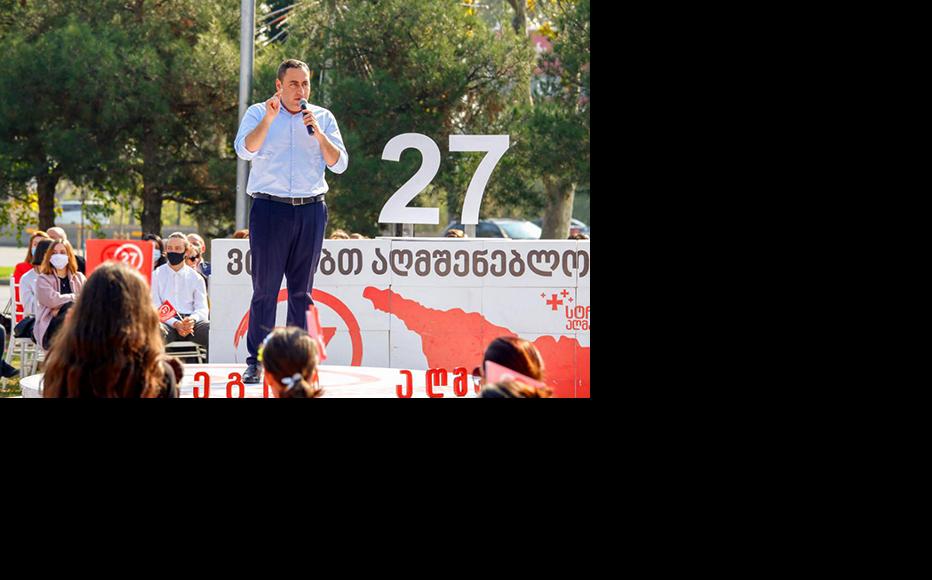 Giorgi Vashadze, candidate for Prime Minister with the 'New Georgia' Party. (Photo: Giorgi Vashadze Campaign)
The link has been copied

Giorgi Vashadze is currently head of the Strategy Agmashenebeli party, which he launched in 2016 after leaving Mikheil Saakashvili’s UNM in which he held a number of leading roles including serving as deputy justice minister. Over the last 18 months he has gathered enough support to make a legitimate candidate in the prime ministerial race, fuelled by his ambitious Agmashenebeli Strategy to grow the country’s economy.

IWPR: Let's start with the most obvious question: how do you assess your party's chances in the elections?

Vashadze: We have a really big chance - our support has grown tremendously since we started. We are expecting double digits in terms of support and aim to be the core political party for a new coalition which will be in government after the elections.

If that really happens, what are the parties you would not consider being in a political alliance with?

We are considering an alliance with all pro-Western opposition parties. We wouldn’t consider being in coalition with Georgian Dream and the Alliance of Patriots.

The position of future prime minister seems to be a point of discord – what happens if the opposition cannot find a compromise?

By that logic, the opposition party that gets most votes from the citizens should be in a favourable position to put forward their candidacy, no?

Is the prospect of Saakashvili becoming prime minister so unacceptable to you that you would rather not form a government and have another election instead?

I think [Saakashvili’s] UNM should decide that. They should be realistic; they will be ahead of the situation in which the candidacy of Saakashvili is unacceptable. I don't think that we'll have a scenario like that, but there can be snap elections in this case.

Along with Lelo’s Marshall Plan for Georgia, your Aghmashenebeli strategy - named in honour of Georgia’s greatest king, David IV - is by far the most ambitious when compared to other parties. What is it built on? Where would the funds come from to make it a reality?

The reality is that our programme is not built on a lot of expenditure from the state budget, because what we're focusing on is to attract more investment in the country. We think that we need 12 billion US dollars investment in order to create 300,000 more jobs, which is really important for economic development. Our agenda is largely based on innovative solutions and attracting investors.

How are you going to attract them?

Through the development of the concept of industrial parks, to give just one example. The industrial park will act as a platform for a small/medium business, which will also increase production. So, for example, as prime minister I'm going to communicate with big global operators who have the experience of developing industrial parks and offer them the opportunity for investing in Georgia. We as a government will be ready to simplify bureaucracy for them, to give favourable conditions, to explain which market they can target from Georgia, for example through the DCFTA [Deep and Comprehensive Free Trade Agreement with the EU] they can target the European market, then there is the free trade agreement with China, they can have the Caucasus market and wider regional market.

Is any sort of realistic expectation that they will listen to you and be interested? Have you already had some talks, have you got any promises, any assurances?

I had a lot of discussions with different investors from the EU to the US. For example, I had meetings in Washington DC with different type of US business associations and they are interested. I need the mandate of the prime minister in order to increase the credibility in the offers we can bring to them. On the other hand, we [also] have another big project called IT cities.

Can you drop any names so that we can also get feedback from them?

I can't say exact names right now, but for example in Chicago we have our branch of an innovation and development foundation that is cooperating with a lot of different companies, blockchain technologies and we have direct contact with all of them. I think that we can use that platform in order to bring them to Georgia, and I’m more than sure we can create a good environment. In addition, I think right now Georgia is missing a huge opportunity in terms of, let's say, Belarusian IT companies looking for new places where they can settle their offices because of instability in Belarus. Ukraine, Poland, the Baltic states are offering a lot to them and nothing is done from Georgian side. I think that we could attract them because we have a very favourable business environment here.

Employment has been a huge problem in Georgia for years, and you are promising 300,000 new jobs - but at least 85,000 are envisaged in the tourism sector. That has seen massive losses due to Covid 19 worldwide. So how does this add up?

We have a Covid problem now, but it doesn't mean that it will be forever. We should prepare ourselves for the post-Covid economy… in summer, for example, Georgia lost a huge opportunity when we had “green” country status from the EU because we could have attracted a lot of tourists from other new member states which also had a green status. The reality today is that we miss [the revenue from] these three months badly. According to our calculations, we could bring into the country a minimum of 1.5 billion dollars. But in the long term, we are thinking of developing touristic infrastructure in small villages, regional hubs, small cities and towns and to develop agro-tourism so that tourists go not only to Tbilisi and Batumi.

What challenges do you see that would compromise this strategy’s implementation? Why should a regular Georgian voter believe that you will deliver on your promise while all other governments and all other parties - including your previous party – could not?

I think my background in public service shows that me and my team can deliver results in Georgia, and I think that is something which creates trust in our political party. I was personally in charge of reform and there were a lot of reforms in Georgia... also the second point is that our team consists of a completely new generation of politicians, good professionals in their fields who were not [previously] in politics.