For some, Narimanov is an inspirational role model. For others, he was a Communist traitor.

For some, Narimanov is an inspirational role model. For others, he was a Communist traitor. 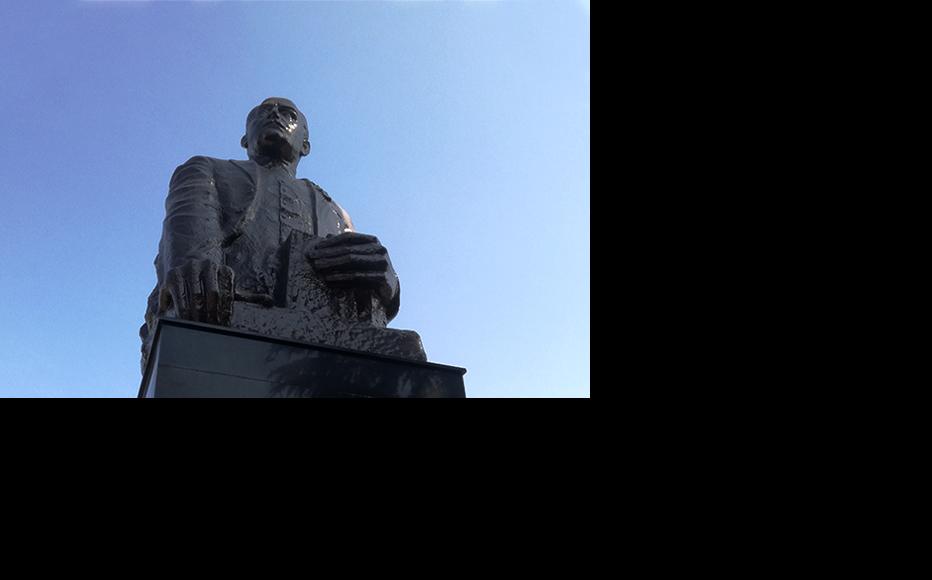 The Statue of Nariman Narimanov in Marneuli. (Photo: Joseph Alexander Smith)
The link has been copied

On a sweltering mid-summer afternoon in Marneuli, 40 km from the Georgian capital Tbilisi, the small park in front of the town’s cultural centre is nearly deserted.

A freshly-painted merry-go-round and child-sized electric cars stand idle as families shelter indoors from the oppressive heat of daytime.

In the centre of the park stands a grey statue on a shiny black plinth. It shows a half-length figure, clutching a book in one hand and leaning on a ledge with the other with his chin lifted slightly, as if addressing followers. At the base of the plinth, several bright red plastic tulips lie heaped in a small pile.

This unimposing monument to Nariman Narimanov – a 19th century ethnic Azerbaijani writer, teacher and later Bolshevik – is at the heart of an ongoing controversy that has spotlighted deep-rooted ethnic and political tensions.

In this busy market town of some 20,000 people, about 80 per cent of the local population identifies as ethnic Azerbaijani. For them, Narimanov is a historic and inspirational role model. But for many others, he is a controversial figure, having also served as a Communist leader who played a leading role in bringing the Red Army to Georgia.

Most recently, on May 24, local Georgian Orthodox bishop Metropolitan Giorgi Jamdeliani used his Sunday sermon to denounce mayor Zaur Dargali’s decision to carry out restoration work to the statue.

“How dare the mayor do such a thing?” he said, according to the Facebook page Alilo in Marneuli, which promotes local church activities.

“Let me state categorically, that I give the mayor a reasonable amount of time to start taking down this Soviet symbol – this statue of a Soviet figure - with his own hands and in accordance with the law,” he said, referencing Georgian legislation which explicitly bans the public display of Soviet or Fascist symbols.

Some saw the bishop’s statement, widely reported by the media, as yet another incursion of Georgia’s influential Orthodox Church hierarchy into public and political life. Only weeks before, the Patriarchate had controversially decided not to shut churches ahead of Orthodox Easter on April 19, despite warnings of the dangers of the virus, in what was widely seen as a show-down between church and state.

For others, the controversy around Narimanov’s statue highlighted tensions over the rights and visibility of ethnic Azerbaijanis - who as the country’s largest ethnic minority make up six per cent of the population - as well as Georgia’s troubled relationship with its Soviet past.

“Since we started daily programing about five years ago, the Narimanov statue issue has come up every single year,” said Kamila Mamedova, director of Marneuli FM radio, which broadcasts in Georgian and Azerbaijani.

Born in 1870 to well-off Azerbaijani parents in Tbilisi, Narimanov was educated in Josef Stalin’s hometown of Gori.

Through its Tatar section for local Turkic-speakers, the seminary produced a generation of public figures, many of them nationalist, for neighbouring Azerbaijan.

After graduation, Narimanov moved to the village of Qizilajlo, close to what would later become the town of Marneuli. By the time of the 1905 Russian revolution, Narimanov had gained a reputation as a prodigious author.

“For local people here, Narimanov is a writer – the first author of novels in the East,” said Samira Bayramova, a local activist who works on minority issues. “For us, his writings are a great way to see what people were talking about a hundred years ago… In Qizilajlo especially, he’s remembered as someone who educated locals and helped a lot of people.”

But Narimanov’s career after the 1917 revolution is deeply controversial in Georgia. After joining the Azerbaijani Communist party, he was elected chairman of the local Council of People’s Commissars in 1920.

The Red Army’s arrival in both Azerbaijan and Georgia ended the short-lived independence of both countries. Crucially for Georgia, Narimanov also sat on the Bolshevik Transcaucasian Territorial Committee which transferred the Zaqatala district – part of independent Georgia – to Azerbaijan.

Jamdeliani told IWPR that his comments about Narimanov were solely down to his political activities.

“Within a few days of my sermon, some provocative elements tried to twist my words to make it sound as if I’m against the Narimanov statue because of his ethnicity,” the bishop said. “This isn’t the truth of it. We’ve dismantled monuments to Stalin, to [revolutionaries] Filipe Makharadze and Sergo Orjonikidze …. Nariman Narimanov belongs to this same category of traitors – he’s someone who helped bring about the Sovietisation first of Azerbaijan and then of Georgia.”

Jamdeliani continued, “Our Azerbaijani brothers and sisters should understand it’s not about ethnicity …. Even if a monument stood to a Jamdeliani who had committed such crimes I’d still support the removal of this monument.”

Others argue that this argument failed to recognise the writer’s cultural significance to a whole swathe of Georgia’s population.

“For [local activists] the fact that Narimanov was born in Tbilisi is incredibly important,” Mamedova said. “Even his great-grandfather, who was a famous ashiq [bard], is mentioned in the works of a famous Georgian writer …. It proves that Georgian Azerbaijanis have their own history, they’ve lived here for centuries, they’re not from abroad – and this is fundamental to the identity of local Azerbaijanis.”

Sanan Kurbanov, a contributor to the local Azerbaijani-language news platform Gündəlik - Gürcüstan (Georgia Journal) cited this erosion of cultural heritage as a key reason for why the Narimanov statue has become such a flashpoint.

“I feel like we’ve lost everything,” he said. “The village where I grew up in Bolnisi is known to us as Fakhralo, but since [Georgia’s independence] it has been renamed as Talaveri. Now we hear talk of replacing the statue of Narimanov – which has stood there for years – with one of a Georgian [nationalist] hero, Merab Kostava.”

Mamedova said that a creative solution needed to take a whole range of complex historical sensitivities into account.

Otherwise, the fierce back-and-forth over the Narimanov statue was likely to last for some time, she continued, adding, “The problem is that political elites – both government and opposition – haven’t studied the issue in enough detail and can only discuss it in terms of nationalism and ethnicity.”

Giving Voice, Driving Change - from the Borderland to the Steppes
Georgia
Culture, Life
Connect with us