“The pandemic also gave me a chance for a future.”

“The pandemic also gave me a chance for a future.” 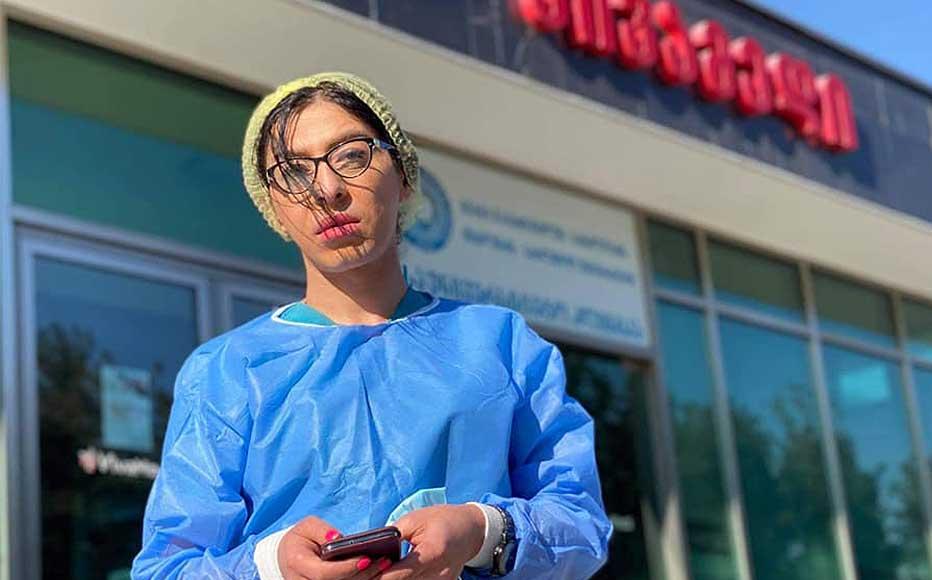 Frontline worker Gabriela Romanova, a transgender woman finds her happiness helping people with COVID-19. © Courtesy of G. Romanova
The link has been copied

When the pandemic hit Georgia last spring, 29-year-old Gabriela felt she could no longer carry on.

As a transgender woman, the widespread prejudice she had encountered had forced her to live on the streets and work as a sex worker to survive.

But when the nationwide lockdown was instituted, Gabriela and other sex workers were plunged into poverty.

In desperation, she and a friend decided to burn themselves alive in front of City Hall last April to protest their situation.

“I cannot describe the feeling when you have lost everything and there is no hope for the future,” Gabriela said. “I couldn't pay my rent and couldn't afford food.

“In normal cases, people turn to their families for support when they need it, but in my case, my family overlooked me due to my difference, I haven't spoken to them in 12 years, and I have no one who wanted to help. This pushed me towards the decision to commit suicide.”

Her friend Madona suffered burns as a result of the incident but survived, and police managed to rescue Gabriela before she was badly hurt.

And to her surprise, the incident changed her life. She was offered some money from a transgender community group and a friend shared her story on his popular Facebook page.

The head of Tbilisi’s Vivamendi hospital, Nino Kuzanova, saw the post and offered Gabriela a job as a cleaner.

“The pandemic brought me to a critical condition, but also gave me a chance for a future,” Gabriela said, adding that she had been welcomed with open arms at the hospital where she now also volunteers with Covid-19 patients.

“I have felt a lot of positive attitudes from my colleagues, patients and people in general. They appreciate my courage and work during this difficult time.”

“Now is not the time for hate."

A 2019 poll revealed that 24 percent of the population would not like to have homosexual neighbours.

According to Georgia’s human rights ombudsman office, transgender people are among the most vulnerable groups in almost all spheres of life. They face barriers to renting a home, finding work, accessing services or enrolling in higher education.

“One of the reasons for transphobia is a lack of information in society and irrational, erroneous stereotypes and stigmas,” said Teona Gogolashvili, a press officer at the human rights ombudsman’s office.

“It is also critical to disseminate real-life examples that show that transgender people, like others, can and do enjoy different rights and that they are full members of society who need some support to achieve equality.”

Gabriela said that her own story was a perfect illustration of how tolerance allowed trans people to integrate into society. She now works one or even two 24 hour shifts, depending on the number of critical patients. Her responsibilities include distributing food and cleaning the wards.

“The work is very tiring,” she said. “I can hardly stand on my feet when I leave the clinic, but I still love what I do. I know that I help those who need it, and that is the only thing that matters.”

In recent months, she has begun working with Covid-19 patients too, volunteering her services when she saw that the hospital had a serious shortage of nurses.

“I wanted to help people who suffer from such pain and are fighting for their lives. Most of the nurses left their jobs or got sick, so I decided to help,” Gabriela explained.

“I hope my example will be a sign of hope for other transgender people in Georgia,” she continued. “I can say that Georgian society has slightly evolved in their views towards the LGBT community.”

Giorgi Tabagari, an activist who heads Tbilisi Pride, said that he also hoped the tide was changing for LGBT people in Georgia, as shown by Gabriela’s experience.

“There are more and more such cases, which indicates a positive trend,” he said, but added that more action was needed to change wider discrimination.

“Given the general socio-economic crisis, many transgender people have left the country over the past two years and the community has almost halved. The reason is that many of them do not have the opportunity to realize themselves here.”

Gabriela said that all she had needed was the chance to prove to everyone that she deserved fair treatment.

“I am breaking stereotypes about transgender women and I am very happy. Who could have imagined a few months ago that a transgender woman would work be working in a hospital and taking care of infected patients in Georgia,” she said, adding, “Now is not the time for hate."

Giving Voice, Driving Change - from the Borderland to the Steppes, Coronavirus Pandemic
Georgia
LGBTI, Coronavirus, Human rights
Connect with us