Georgia: Speaking Out About Postnatal Depression

Sociologists and mothers believe that the time has come to break their silence over debilitiating condition.

Georgia: Speaking Out About Postnatal Depression

Sociologists and mothers believe that the time has come to break their silence over debilitiating condition. 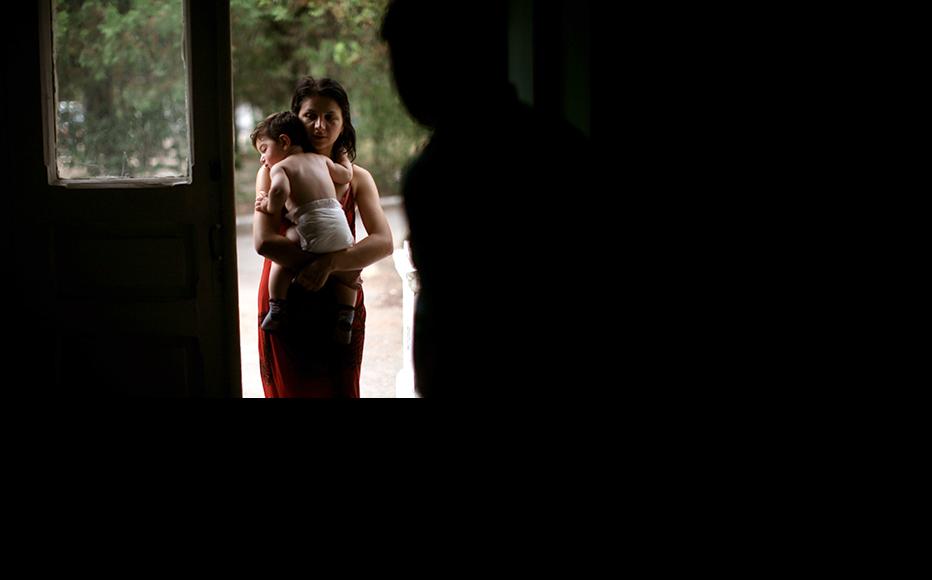 A young mother holds her child in Tbilisi. (Photo: Uriel Sinai/Getty Images)
The link has been copied

“I am a bad mother,” said Liana Mamatsashvili, a 37-year-old Georgian woman with a seven year old daughter. “I repeated those words on a daily basis during the first six months after my delivery.

“Those words traumatised me so much that I started to punish myself mentally and physically. I deprived myself of any pleasures, including meeting with friends, eating or drinking anything tasty and sexual relationships,” she continued. “When I went out, I covered my face with my cap, as if to hide my bad mothering from the public’s gaze.”

Liana, who now works on sexual education issues for women, later learned that her feelings were symptoms of postnatal depression (PND.)

Fear of being a bad mother is both a leading cause and a symptom of this debilitating condition. According to guidelines from the Royal College of Psychiatrists, PND can affect all women regardless of country, socioeconomic conditions, and ethnic or religious background. One 2018 study revealed that women across the world were largely unwilling to speak openly about PND, due to stigmatisation and the fear that their children might be taken away from them. Socially conservative Georgia, where there is also a strong taboo against speaking openly about the condition, is no exception. Nevertheless, some sociologists and mothers in the South Caucasus country believe that the time has come to break that silence.

According to the UK’s National Health Service, PND affects between 10 and 15 of every 100 women. Symptoms, which include anxiety, disturbed sleep and appetite, poor concentration and feelings of guilt or low self-worth, can be exacerbated due to hormonal changes.

“After delivery, women realise their enormous responsibility to a newborn child,” said Tamar Tandashvili, a psychologist and anthropology lecturer at Tbilisi’s Ilia State University. “They vividly realise that they now have an unbreakable emotional link which will last to the end of their lives. It’s a huge psychological step.”

She added that mothers’ fears and anxieties often lead them to do everything in their power to monitor their infant’s wellbeing, even at the expense of their own mental health.

That was the experience of Khatia Basilashvili, a 30-year-old mother to a three-year-old boy, who recalled feeling deep anxiety and suffering panic attacks.

“I banned sleep as believed that during sleep something horrible would happen to my child,” she said. “I slept for only three to five hours over the course of three days, I was seized by panic and fear. The condition led to high blood pressure and my family had no other choice but to inject me with tranquilizers.

“Beyond a mental breakdown, my depression really became physical,” Basilashvili continued. “I refused to shower, wash, or brush my hair. I was wearing the same t-shirt, with parts cut out to make it more comfortable for breastfeeding; the front of my shirt was wet with milk most of the time. When my panic attacks built up, I was often told to calm down: ‘who hasn’t had a child before, we’ve all been there!’”

Such narratives, Tandashvili said, were “enormously destructive” but widespread in Georgia’s patriarchal society.

Guga Grigolia, a psychologist and lecturer at the Georgian National University in Tbilisi, agreed that cultural factors were important in understanding PND.

“Recent studies illustrate that PND is a global phenomenon, but cultural factors vary from country to country,” he explained. “For instance, individualism might be the cultural contributor in western countries, whereas collectivist attitudes to life might be more present in Asian countries.”

Grigolia said that ideals of a supposedly perfect body also put pressure on women in all societies.

Maia Akhvlediani, a 30-year-old mother of two, said that she had found this expectation particularly stressful.

“I started a diet soon after delivery, as I gained a lot of weight,” she said. “I couldn’t handle it; I opened the refrigerator and literally ate everything. I tried to cut off my curves, even though I knew it was impossible.”

“The state does not recognise PND as an illness with separate, special needs,” said Ana Gvinianidze, executive director of Psycho-Education Georgia, an NGO which supports the integration of people with mental health disorders. Gvianidze argued that the state should take preventative measures including offering screenings and proactively informing women about mental health complications which may follow pregnancy.

Nevertheless, there has been some progress. In December 2018, the Georgian government adopted Decree 693, which increases funds for the state to provide care to people with mental health disorders. Community centres will now offer free consultations with psychiatrists. Tamar Gabunia, Georgia’s deputy minister for the occupied territories, health and social affairs, said that while her department did not collect statistics specifically about PND, they would be catered for under the new programme. Family doctors, gynaecologists, and paediatricians are supposed to be provided with guidelines for how to recognise symptoms of PND.

“Pregnant women and those planning pregnancy shall receive information regarding PND… [But] PND is not separate and is part of an integrated antenatal check. Often, gynaecologists and paediatricians evaluate the mothers’ condition and check the patient’s mental health without verbalisation. However, the ministry has no monitoring mechanism to evaluate whether the service is delivered or not,” Gabunia said.

The minister added that while mothers should ideally be informed about PND diagnoses during antenatal consultations, it was a challenge to ensure this in practice. “Doctors know they should communicate this information, but it is difficult to make it obligatory and even harder to monitor execution of that obligation,” said the minister.

Widespread stigma against discussing the issue remains a major obstacle. All of the women interviewed for this article stressed that they had never spoken about their condition openly nor sought medical assistance.

Grigolia said that the first, crucial step would be to raise public awareness of PND among both men and women.

“I was pretending to be happy, as it was expected from me,” recalled Teona Dalakishvili 30, mother of a baby girl. “But that facade of happiness was actually what destroyed me the most.”

This article was produced as part of the partnership between IWPR and Chai Khana, a multimedia storytelling platform based in Tbilisi.

Giving Voice, Driving Change - from the Borderland to the Steppes
Georgia
Health, Life, Women
Connect with us