Measles outbreak may be linked to wider disinformation campaign.

Measles outbreak may be linked to wider disinformation campaign. 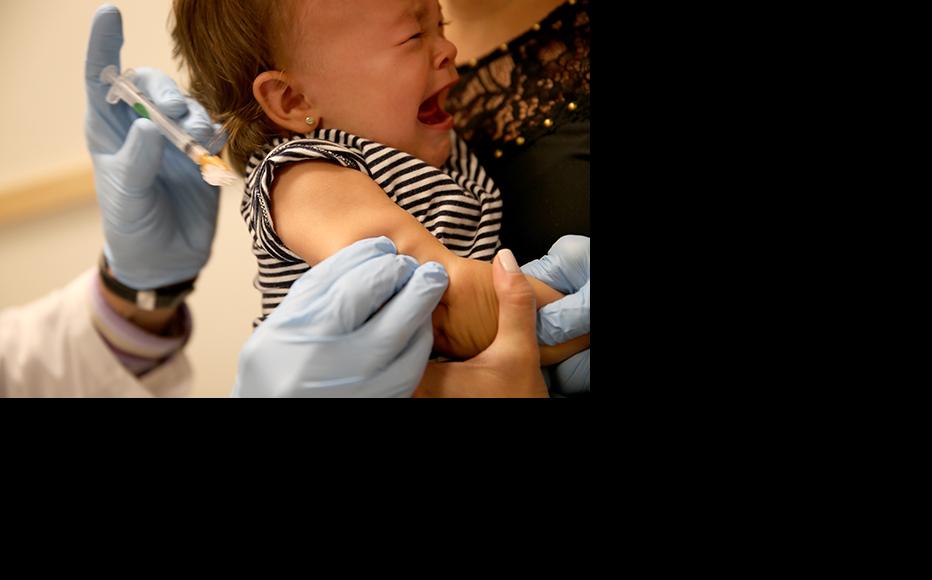 A child is vaccinated for measles. The virus can lead to numerous serious complications. (Photo: Joe Raedle/Getty Images)
The link has been copied

When her first child was born, Magda Chinijashvili agreed to all the childhood vaccinations routine in Georgia. But then the one-year-old was diagnosed with cancer of the eye and the family travelled to Ukraine for chemotherapy. There, Chinijashvili was told that vaccination was a risk factor for the disease; at that moment, she and her husband vowed that there would be no more vaccinations.

The 42-year-old, who lives in Georgia’s second city of Kutaisi, is now a mother of three children aged six, nine and 11. Two weeks ago, they all came down with measles.

“The boys have had a difficult recovery process, but I believe every parent must take an informed decision,” Chinijashvili said. “I don’t know whether it serves somebody’s interests why these statistics are not public, but it’s a fact that there are people who suffer because of vaccination.”

Georgia is currently experiencing a measles outbreak, according to data from the National Centre for Disease Control and Public Health (NCDC). The disease affected 2,100 people in 2018, and 2,885 in only the first quarter of 2019. Four people have died as a result of measles in the last year.

The World Health Organisation has reported a global increase in cases of the virus and deemed fears over vaccination as the main reason, with much of this reluctance fueled by online debate. In Georgia, some claim that Russia is deliberately feeding this rumour mill as a way to destabilise society.

“All over the world social networks host different anti-vaccine groups where disinformation regarding the negative effects of vaccination is disseminated based on various Russian sources; Georgia is no exception,” said NCDC scientific director Paata Imnadze. “There are a lot of groups and pages on Facebook, in Georgian, where mostly young mothers are the major sources of information with no scientific proof.”

One such resource is the Vaccination and Risk Factors Facebook page, which has 3,456 followers. Members collect, translate and share information regarding the supposed side effects of vaccination, as well as their personal stories. The page links to anti-vaccine groups, including one organising a petition against a draft law under consideration in Georgia that would make vaccination mandatory. One of the group admins recently claimed that they have collected more than 100,000 signatures and plan to continue.

Another focus for Russian propaganda machine has been on the Lugar laboratory in Tbilisi, a US-funded public health research centre that opened in 2013.  Russia has consistently disseminated reports about its alleged threats including its supposed production of bioweapons.

Although the NCDC has not reported an increase in the proportion of parents rejecting vaccination - a full 90 per cent of the country’s children are vaccinated by the age of six - Tbilisi pediatrician Lela Zangurashvili said she believed numbers were indeed rising.

“If in the past children were deprived of vaccination because of parental neglect, today ideological anti-vaxers consciously reject vaccination,” said Zangurashvili, who works in the capital’s Mrcheveli clinic. “Anti-vaxers, in most cases, come across the information regarding the negative effects of vaccination on the internet and believe them. The mostly justify themselves by saying, ‘so many things are written [about it] on the internet,’” Zangurashvili said.

Online disinformation can be a powerful tool. A study published by American Public Health Association in October 2018 found that Russian trolls and Twitter bots were weaponising anti-vaccine messages as part of Russia’s foreign policy - supported by its intelligent services  - in order to influence so-called Western values.

The risks involved in refusing vaccination can also be extremely serious. According to the Centre for Disease Control and Prevention (CDC) in the US, measles may have numerous serious complications.  One out of every 20 children will develop pneumonia and one in 1,000 is at risk of encephalitis. A measles infection later in life is particularly dangerous.

The Media Development Foundation (MDF), a Tbilisi-based NGO, studies Russia’s soft power influence on Georgia. Its Myth Detector platform has reported that a set of online media outlets mirror fake news about vaccination.  For instance, Myth Detector found claims linking vaccination to autism and infant – as well as being a tool used by the West to experiment on the Georgian population - were distributed by 13 apparently interconnected online platforms which appear to be linked to Russia.

Transparency International Georgia has also published a study on Russian disinformation that concluded that media platforms with a fake news agenda had been established by people affiliated with Russian charities or civil society organisations.

Among such outlets is the popular Asaval Dasavali newspaper, which ran a story claiming that the vaccine was developed in the Lugar laboratory rather than Belgium, where it comes from in reality. Another story with the same byline - Is the “deadly flu” coming from Georgia created in the US biolab? - was published by extremist platform Veterans Today.

MDF researcher Sopho Gelava has been studying the anatomy of fake news in Georgia and agreed that the anti-vaccine movement was an integral part of Russia’s broader efforts at disruption.

“It is always part of a larger campaign, mainly addressed against the Lugar laboratory that’s claimed to be a threat to Russia’s security,” she said.

“Creating disorder, scepticism and mistrust of political democracy and the western systems – these are the major goals of Russia’s disinformation propaganda and definitely part of the country’s foreign policy, as they make it possible to influence people living outside Russian borders,” he said. “There is nothing new in this method - disinformation has always been part of broader state politics - but we now observe the transformation of this tactic based on modern technologies… well-structured and pre-planned, so trolls, bots and content aggregators act in line with these schemes and the anti-vaccination campaign is part of the overall tactics of an information war.”

“The anti-vaccine campaign definitely harms not only people living in the US or Europe, but Russian citizens too, but this is a price worth paying."