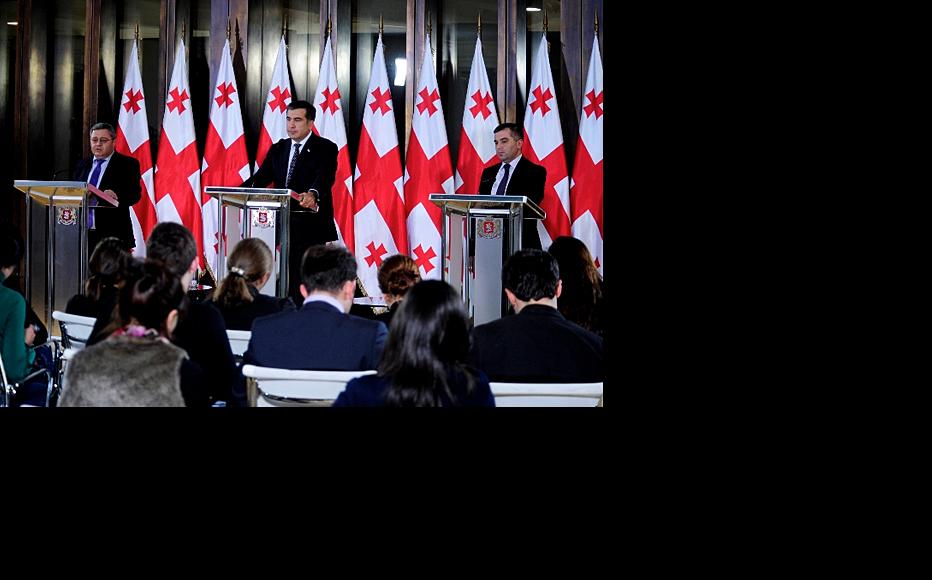 After last week’s street battle in the Georgian capital Tbilisi, President Mikheil Saakashvili met a senior figure from the governing coalition elected last October in an attempt to resolve the bitter dispute between the old and new administrations.

Saakashvili’s February 11 talks with parliamentary speaker David Usupashvili, from the Georgian Dream coalition, ended in tentative agreement to carry on talking, although their press conference degenerated into arguments about who was to blame for the clashes.

On February 8, Saakashvili supporters arrived at Georgia’s national library, where the president was due to give his annual state-of-the-nation speech. He would have normally spoken in parliament, but the Georgian Dream majority refused to let him do so.

Clashes broke out when Saakashvili’s allies were confronted by a crowd of protesters hoping to prevent the president from speaking. Several members of parliament allied with president were injured. Police intervened some time after the trouble broke out.

Interior Minister Irakli Gharibashvili, an ally of Prime Minister Bidzina Ivanishvili, promised that those responsible for the violence would be brought to justice. But he also accused Tbilisi mayor Gigi Ugulava and parliamentarians from Saakashvili’s United National Movement, UNM, of provoking the clashes by refusing to enter the library by a back door.

Saakashvili said the government and Georgian Dream legislators had planned the whole thing.

“What we saw today was a historic event. I want you all to ask yourselves, is this the Georgia that you dreamed of? Is the road that will take us towards Europe?” he asked when he finally got to deliver his speech at his official residence.

The anti-Saakashvili protesters included some individuals who were jailed when the UNM was in power and whom the Ivanishvili administration has now released after deeming them political prisoners. Ugulava suggested they had been freed so that they could take part in this kind of trouble.

He also accused the police of “total inaction” during the violence.

Leading human rights organisations were also critical of the behaviour of the police, who come under Georgia’s interior ministry.

“We believe the interior ministry failed to take effective preventive measures to ensure that the protesters did not harm the guests invited to the event,” said a joint statement signed by the Georgian Young Lawyers’ Association, the International Society for Fair Elections and Democracy, Transparency International Georgia and the Open Society Georgia Foundation.

“Clearly, the government has a responsibility to protect… to provide law and order,” he said. “My message to those people directly would be: no matter how much they feel they have been wronged in the past, this is not how they should try to address those grievances.”

After coming to power in an initially smooth handover from the outgoing UNM government, Georgian Dream has moved to restrict Saakashvili’s powers, arrest former ministers and abandon his favoured projects. (See More Arrests in Georgia  and Grand Designs on Hold in Georgia.) The president will remain in office until an election this October, for which he is not eligible to stand, but his authority is already much diminished.

Georgian Dream also wants to push through constitutional amendments restricting the president’s ability to effect a change of government without getting parliament’s approval. In his February 8 speech, Saakashvili promised not to exercise this power during his remaining term.

His allies have hit back by opposing the new government’s plans, even putting forward a proposal to enshrine his pro-western foreign policy in the constitution.

After meeting Usupashvili, the president was cautiously optimistic, saying, “I wouldn’t say we agree on everything. We have our positions, and they have theirs. I think the discussion will continue. The important thing is that we agreed we must continue to engage in dialogue.”

For his part, the speaker said, “an agreement was not reached, but I wouldn’t call this a hopeless process”.

Some analysts hope the street battle will galvanise both factions into seeking common ground.

“A chance to move out of this crisis has appeared. The events that occurred outside the library have given both sides the chance to enter into a process of de-escalation,” Nodar Sarjveladze, head of the Foundation for the Development of Human Resources, said. “If de-escalation actually starts taking place, both sides will win.”