Despite Georgian Dream majority, a further 16 seats are as yet undecided. 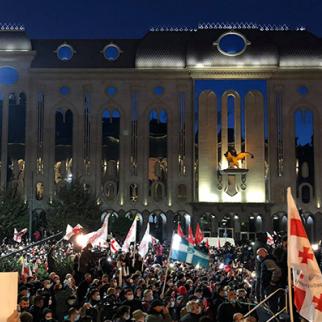 Protestors gather in front of parliament to demand new elections and the resignation of the chair of the Central Election Commission, Tamar Zhvania. (Photo: Anastasia Mgaloblishvili)

Despite Georgian Dream majority, a further 16 seats are as yet undecided. 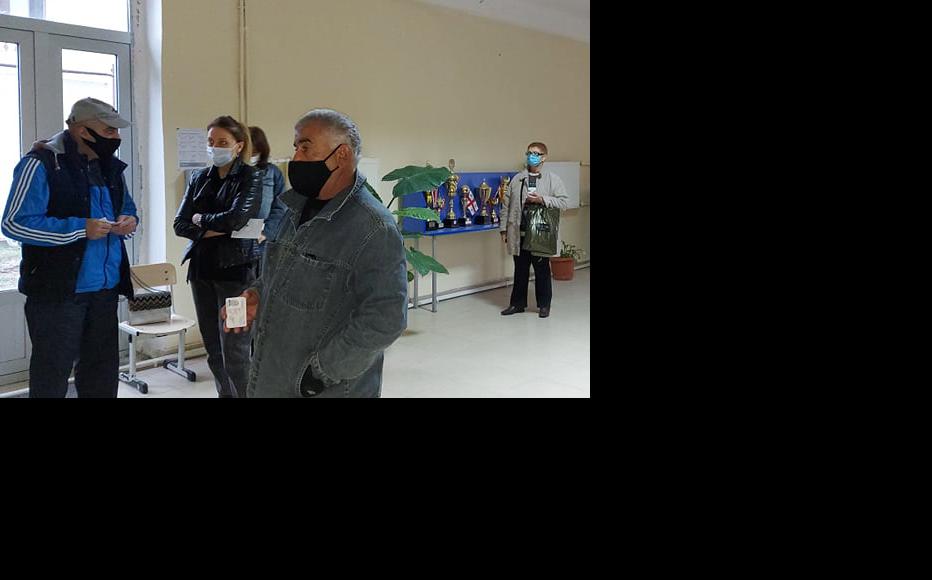 People waiting in line to vote on October 31. (Photo: Nino Chibchiuri/IWPR)
The link has been copied

Opposition parties in Georgia have vowed to boycott the second round of elections in 16 majoritarian districts as protests continue over the October 31 parliamentary polls.

The ruling Georgian Dream party won more than 48 per cent of the vote in last month’s elections and are set for a historic third term in power.

However, despite international assessments that the elections were fair, the opposition has continued to maintains that they were rigged by Georgian Dream to establish one-party rule.

The eight opposition parties that passed the threshold rejected their mandates and organised protests demanding new elections and the resignation of the head of the Central Election Commission chairman (CEC).

In elections held under a new mixed system, the country elected 120 lawmakers from the proportional lists and 30 from the majoritarian lists.

Just over half of these constancies will now head for a run-off. Despite the boycott by opposition parties, their candidates will still appear on the ballot and people will be able to vote for them.

In Khashuri and Kareli, Georgian Dream candidate Zaal Dugladze received 49.32 per cent of the vote while the United Opposition’s Nato Chkheidze got 29.9 per cent.

Chkheidze won enough support via proportional voting to be able to enter parliament, but has refused her mandate and will not run in the second, majoritarian round.

The opposition stance has been criticised by some experts. Analyst Soso Mezvrishvili argued that the opposition’s refusal to enter parliament was irresponsible and sent “a very bad signal to Georgian voters”.

“There is a risk of losing 52 per cent of the votes and of giving the ruling party absolute power,” he said. “In addition, there is a pandemic and street protests are very dangerous. I believe that sound criticism, democratic processes and the protection of voters’ interests should take place in parliament and not in the streets, since the democratic processes are made through dialogue and not through violence or coup attempts, when there is no need for that.

“I think that the second round is very important in this regard as the opposition has a great chance to win more votes and take more seats in the parliament.”

But others support the opposition’s viewpoint that the elections were not transparent or fair.

Nini Abuashvili, 18, who voted for the first time this year, said that she had been disturbed by the scenes she saw at the polling station.

Abuashvili said that rumours had been circulating about other violations.

“I also heard some people phoned voters and asked them to come to vote in exchange for some promises; people were brought to the polling stations under pressure,” she said.

Lekso Merebashvili, a lawyer with the Georgian Human Rights Center NGO, agreed that numerous factors had led to a flawed outcome.

“The presence of the agitators and coordinators of the ruling party in the vicinity of the polling station on the voting day affected the will of the voters,” he said. “There were also cases of voter bribing at the polling stations. Of particular concern are the irregularities identified during the vote counting, which had a significant impact on the results. The process of vote counting at various precincts revealed facts that put the credibility of the elections in question. The possibility of ballot stuffing as well as so-called carousel voting was identified.

“Taking into account all the above, it can be said that the obtained results do not reflect the real will, attitude and anticipation of the citizens of Georgia,” he concluded.

In Gori and Kaspi, former Shida Kartli governor Giorgi Khojevanishvili of Georgian Dream won in the first round. He said he had been confident of victory despite being one of 13 candidates.

“During the pre-election campaign we were actively cooperating with the voters, which gave me the anticipation of this result,” he said. “As for the opposition, we expected provocations from their side, which did happen in different precincts.They knew that in a peaceful situation they had no chances of winning.

“Overall, the elections in our region took place in a more or less peaceful environment. There were no incidents which could in some way affect the election results.”

According to the CEC, Khojevanishvili received 55.58 per cent of the vote, with United Opposition candidate, former lawmaker Badri Basishvili, winning 27.96 per cent.

But NGOs who monitored the Gori polling stations said that they had found some inconsistencies which they wanted to see properly investigated.

“We revealed a number of imbalances between the number of voters who came to the polling station and the total number of votes cast,” said Tea Tedliashvili from the Tbilisi-based International Society for Fair Elections and Democracy (ISFED). “We filed a complaint, but the district commission left most of the complaints unconsidered. We appealed to the Gori District Court, which did not satisfy our complaint. After this, we are going to appeal to a higher court.”

Levan Tarkhnishvili, the majoritarian candidate from European Georgia party and also the former CEC chairman, expressed doubts about the protocols issued by the district commission concerning the deadline for reviewing complaints. These effectively meant that there was no further opportunity for complaint via official channels.

“The protocol, which was corrected and rewritten four times, still contains errors,” he continued. “The election administration did not respond to any violations. We remember how the results were announced on the night of the elections, the logical continuation of which is that none of the 91 complaints were satisfied, but most of them were not even examined.”

National Movement candidate Badri Basishvili, himself an IDP as a result of the August 2008 war, expected significant support from his own community. However, according to the CEC, he was not able to overtake the candidate of the ruling party in any of the six IDP settlements in Gori.

“[Georgian Dream founder] Bidzina Ivanishvili has stolen everything so far, and on October 31 he bought the elections with his dirty money,” Basishvili said. “But no one is going to live according to rules set by oligarchs. There are more patriots in this country than… obedient slaves.”

Mikheil Goginashvili, the Georgian Dream-Democratic Georgia chair in Gori municipality, warned that the opposition’s actions served only to fuel unrest in the country.

“The elections went very well, calmly, without any violations,” he said. “People make mistakes and it will always be so. The actions of the opposition serve only one thing. They want to cause unrest in Georgia. They want their minority with 20 per cent to win over 50 per cent – this is what they want. In democratic countries such things do not happen. As for the protocols, there are some flaws, but these did not affect the final results.”

Nonetheless, this remains a point of disagreement. Sociologist Iago Kachkachishvili volunteered to survey how many votes were counted, compared to how many people voted.  He argued that it was unacceptable to approve results in precincts where the number of citizens who went to the polling station was much smaller than the number of votes cast. According to him, this was the case in almost a third of constituencies.

“Since it is impossible to guess which ballot paper was rigged and which one is real, the results in such polling stations should be annulled and re-election scheduled,” he said. “And if the number of polling stations with similar violations is critical, then it is perfectly fair to demand snap elections.”

Protesters in the capital have already announced that they will not obey the recent regulations the government enacted due to Covid-19 that imposed a 10pm until 5am curfew in seven cities including Tbilisi.

Giving Voice, Driving Change - from the Borderland to the Steppes
Georgia
Elections, Protests
Connect with us