Vote for mayors and municipal councillors may choose the country’s political direction.

Vote for mayors and municipal councillors may choose the country’s political direction. 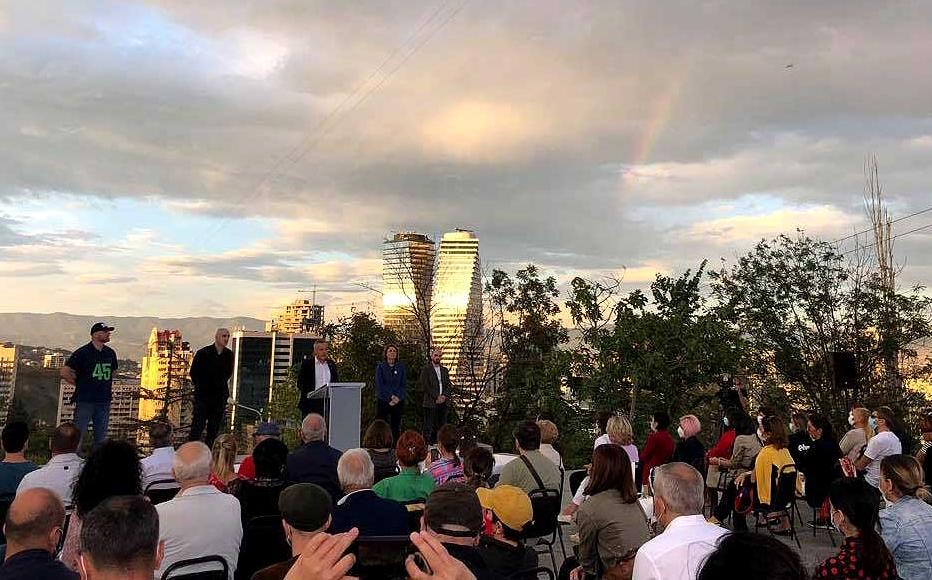 The presentation of the opposition's candidates. © Anastasia Mgaloblishvili
The link has been copied

Tensions are rising in Georgia ahead of the October 2 local elections, which many deem to effectively be a referendum on the ruling Georgian Dream (GD) party. The situation has been further intensified by former president Mikheil Saakashvili’s announcement that he intends to return to Georgia on the night of the election.

The country’s ongoing political crisis stems from the October 2020 parliamentary election results, roundly rejected by the opposition which refused to enter parliament. With the mediation of European Council president Charles Michel, an April 2021 agreement between GD and part of the opposition ended this boycott and mandated snap elections for next year if the ruling party’s share of the vote in the local polls was less than 43 per cent.

GD then unexpectedly announced in July that it would not hold new elections regardless of the local result, arguing that four out of the eight parties that passed the electoral threshold in 2020 had declined to sign the agreement.

Nonetheless, the upcoming polls – in which 64 mayors and 2,044 deputies will be elected - remain highly significant.

“No one is insulting anyone by saying that this is merely a local election where we will decide who will pave the asphalt and roads better,” Nika Melia, the chair of main opposition party United National Movement (UNM) said during a briefing.  “October 2 is not an election but a referendum of dignity. This referendum will determine the future of our homeland.”

Badri Japaridze, chairman of the Lelo for Georgia faction - who is running for the chairmanship of Tbilisi City Hall – told IWPR that his party and the other signatories to the April agreement would simply not allow GD to escape its obligations.

“Whether or not the ruling party abides by the 43 per cent is not important,” he said “Those of us - the opposition forces, the EU, the US - who joined this document find it necessary to abide by each point of the agreement. GD’s announcement isn’t noteworthy since it only serves to demotivate voters."

The tone of campaigning has been vitriolic, with GD leaders variously referring to the opposition as the “radical opposition” and a “revanchist power,” as well as deeming them to be enemies and traitors.

There have been clashes between GD and opposition supporters, and on September 23 Melia and his GD counterpart Irakli Kobakhidze had a charged verbal confrontation which nearly turned physical.

Meanwhile, UNM founder Saakashvili, now a Ukrainian citizen and politician, announced on September 27 that he would be returning to Georgia on the night of October 2, posting a picture of his plane ticket on Facebook. The former president is wanted by the Georgian government for alleged offences including murder.

Experts warn that his announcement would further polarise the country and intensify the crisis.

“In the event that Saakashvili returns, the government will try to detain him, any other outcome is unimaginable” said sociologist Iago Kachkachishvili. “This will certainly be followed by instability and widespread protests."

Although Saakashvili has made half-a-dozen previous promises to return which were never fulfilled, former UNM member Giorgi Vashadze - who now heads the New Georgia party - told opposition channel Formula TV that the threat alone was enough to bolster GD’s chances in the polls.

“We will now see the mobilisation of the part of the electorate that does not want Saakashvili and so they will vote for GD,” he said. “This is what happened in 2018 during the presidential elections. The whole GD campaign at that time was based on the narrative that Misha [Saakashvili’s nickname] was returning. Back then Misha stole the campaign from us and that’s exactly what he’s doing now. His announcement acted as a mechanism to keep GD in power.”

GD received 48.22 per cent of the vote in the October 2020 elections, but its popularity is believed to have diminished over a year which has seen soaring cases of Covid-19 – the country is currently in its fourth wave and hospitals can no longer accept patients – alongside increased inflation and unemployment.

There have been further concerns over Georgia’s democratic backsliding following the violent counter-protests to a planned July 5 Tbilisi Pride event, in which police allegedly did little to restrain a violent mob from assaulting journalists and citizens. As a result 55 people, including 53 journalists, were injured, with one camera man subsequently dying.

The decisive election battle will be in Tbilisi, where more than a quarter of the country’s four million citizens live. There are 16 candidates vying to be the city’s mayor, although there are only three realistic contenders:  the GD incumbent and party secretary-general Kakha Kaladze, Melia and Gakharia. Experts predict that Kaladze and Gakharia will go on to contest a second round.

Elsewhere, in the districts, political fragmentation may split the vote, although in some areas opposition parties support one major candidate. For Georgia, emerging as the third significant force, is not partnering with other opposition parties and has its own candidate in each district.

According to surveys published by GD, their ratings in Tbilisi and other big cities fall between 48 and 55 per cent.

However, other polls disagree. One survey conducted for Formula TV put GD at 36 per cent, with the United National Movement (UNM) at 27 per cent and For Georgia – founded by former GD prime minister Giorgi Gakharia – at 11 per cent.

Given past experience, experts predict that a GD failure to win 43 per cent of the vote may spark more protests in favour of snap parliamentary elections, with the EU making it clear that they would pressure Tbilisi to hold fresh polls.

And polling in general appears to suggest that while GD and the UNM are the main players, the political scene has diversified amid an increased desire for a coalition government – especially given that the opposition movement has also fractured.

“There is no longer a political force in the country which can attract a majority of the vote and hence create one-man rule,” Kachkachishvili said.