Georgia Gears Up for Parliamentary Elections

Analysts predict a fierce struggle ahead as most voters are undecided.

Georgia Gears Up for Parliamentary Elections

Analysts predict a fierce struggle ahead as most voters are undecided. 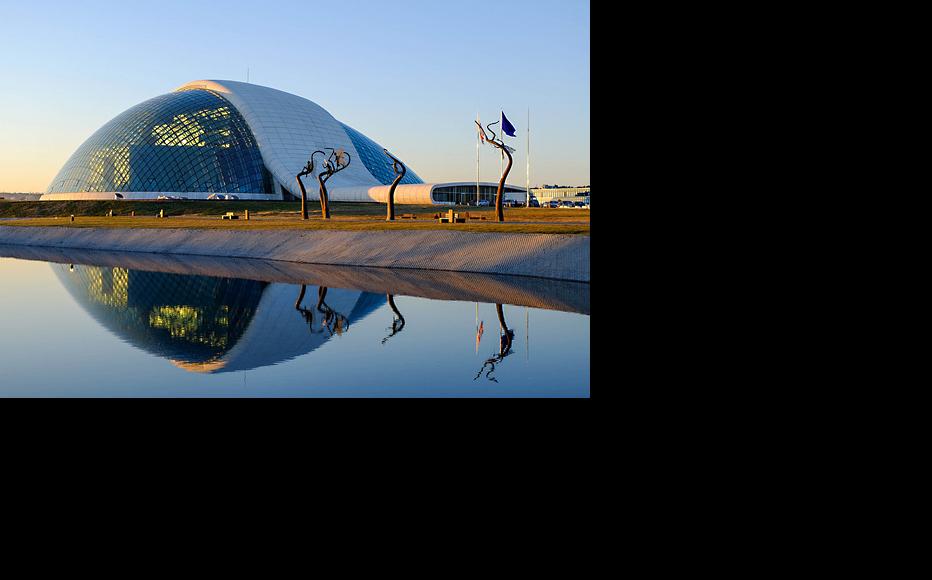 This is Georgia's parliament located in Kutaisi in Western Georgia. (Photo: Berdo Maghularia/Flickr)
The link has been copied

Ahead of Georgia’s upcoming parliamentary elections, new forces are emerging to try and win support from an electorate disillusioned with the current ruling coalition.

According to a pre-election survey, most voters in Georgia have not decided who they will vote for in the October 8 polls.

Analysts say that this could not only lead to previously unseen political alliances but also domestic unrest in a country still working on strengthening its democratic institutions.

“Georgians have thus far held fast to their commitments to independence, prosperity, and democracy. Yet these principles are tested at each political crossroads,” the National Democratic Institute (NDI), a Washington-based NGO that works to support democracy around the world, said in a statement last month.

“If Georgia’s democratic future is thwarted, the impact on the broader region would be profound.”

The Georgian Dream six-party coalition won the last parliamentary elections in 2012 with 54.97 per cent of the votes and currently has 82 seats.

The core Georgian Dream party alone holds 44 seats. All the coalition’s member parties will run seperately in October and it is unclear if they would once again reunite in the next parliament.

The second largest and former ruling party in parliament with 46 seats is the United National Movement (UNM), set up by former President Mikheil Saakashvili.  It won 40.34 per cent of the 2012 vote.

Although Georgian Dream and the UNM will likely be the main contenders again, this year´s election results could be quite different.

According to a public opinion poll by NDI for the Centre for Research Resources of the Caucasus (CRRC) in March, 61 per cent of respondents said they had not decided who to vote for.

Fifteen per cent said they would support the Georgian Dream coalition and 13 per cent the UNM.

A number of other political forces, old and new, have become active in the run-up to the elections with the intent to target the large proportion of undecided voters.

The NDI poll showed that six per cent planned to vote for the Free Democrats, headed by former defence minister Irakli Alasania.

This party left the Georgian Dream coalition in 2014, complaining that the bloc was not truly pro-Western. Their own platform calls for Georgia’s full integration into European and Euro-Atlantic structures.

Another party aiming to court floating voters is State for the People, set up by well-known  opera singer and philanthropist Paata Burchuladze in May this year.

He has called for Georgia to be “reunited around its common goals and learn from the mistakes of the past” as well as to pursue a pro-western course.

Georgia has a unicameral parliament with 150 seats, of which 77 are filled by proportional representation.  The other 73 are elected using a first-past-the-post system.  Lawmakers serve a four-year term.

While Georgia has made great strides in recent years in establishing democratic institutions and fundamental freedoms of expression, the shadow of neighbouring Russia continues to loom large.

Russia not only occupies 20 per cent of Georgian territory, but has also tried to influence the country through informational campaigns, trade relations and threats to impede Tbilisi´s path toward the West.

Georgia has an association agreement with the European Union (EU) and is close to being offered a liberalised visa regime.

Some observers believe the main election battle will be over the parties´ foreign policy orientations.

“There are two main forces – clearly pro-Western [or] neutral in relation to Russia,” said Kornely Kakachia, director of the Georgian Institute of Politics.  “But there is also a third side, openly pro-Russian forces, which could get into parliament, especially if they unite and create an alliance.”.

Both Georgian Dream and the UNM are pro-Western, although the former has also shown willingess to cooperate with Russia.

“In society, there is a certain disappointment and fatigue of the promises of Western partners regarding NATO integration, liberalisation of the visa regime with the EU, and these forces are trying to capitalise on these sentiments and to use them for their own populist purposes,” Kakachia added.

Some experts have argued that a significant share of support for Georgian Dream and other parties in the 2012 elections was due to a protest vote against the then ruling UNM.

This was exacerbated by a scandal over the torture of prisoners in Georgian jails shortly before the election.

Some of the electorate has since been disappointed by the Georgian Dream’s performance, while remaining disenchanted with the UNM.

“Domestically, Georgians’ high and growing expectations of their leaders and institutions have not been fully met,” the NDI said in a pre-election assessment. “NDI surveys show that most Georgians do not think the political parties are making changes that matter to them. Their confidence in the parliament and many government ministries and leaders is low.

This means that any decline in popularity of the Georgian Dream has not translated into higher ratings for the UNM.

The main public grievance is that life has not improved for most Georgians over the last four years.  Contrary to Georgian Dream’s promises, there have been no major developments in the economy, agriculture, international politics or conflict resolution.

“They feel uninformed about, and neglected by, their legislature,” the NDI report continued. “A weak economy heightens these concerns. Considerable attention is focused on the perception that unaccountable individuals are influencing politics from behind the scenes, to the detriment of democratic and transparent decision making.”

The Georgian economy has faced a series of blows since 2014. Lower oil and commodity prices have reduced growth in the region, and with it demand for Georgian exports, according to the International Monetary Fund.

Unemployment stood at 12 per cent in 2015, according to the National Statistics Office of Georgia.  This is slightly less than under UNM rule, but still high.

Against the backdrop of this growing lack of trust in the main political forces, new players want to win over some of the undecided electorate.

“A significant part of the public, as polls show, is frustrated over both major political parties and will give its vote to a ´third force´, “ Kakachia said. “This could be the Free Democrats Party, the party of Paata Burchuladze or another party.”

Tornike Sharashenidze, a professor at the Georgian Institute of Public Affairs (GIPA), agreed that one party might emerge as the kingmaker.

“To predict the establishment of any large coalition before the election is difficult,” he said.  “However, after the elections, Alasania´s [Free Democrats] party will have the final word and whichever side it will take – Ivanishvili´s or the Nationals - the coalition will be on that side.”

Political processes in Georgia since independence were marked by violence and heated emotions.  This made the peaceful change of power through elections in 2012, the first in the country´s modern history, particularly noteworthy.

However, tensions have again been rising in recent months.

A scandal erupted in mid-March when sex tapes featuring two married female Georgian politicians appeared online.  The footage, shot with hidden cameras, showed them having sex with men who were not their husbands, and there were further anonymous threats of more video leaks featuring politicians and a journalist.

The videos were subsequently removed from the internet and criminal cases opened.

The Free Democrats, once part of the Georgian Dream coalition, now accuse their former political allies of continuing negative practices of political surveillance and media pressure used by previous administrations.

“We clearly see that this tradition continues today,” Irakli Chikovani, chairman of the parliamentary faction of the Free Democrats, told IWPR.  “I am surprised by our colleagues with whom we fought together so that these things would stop in Georgia.”

These accusations were soundly rejected.

“Our main goal is that the competition does not turn into a confrontation.  In this respect, a great responsibility lies on us as a state power,” said Prime Minister Giorgi Kvirikashvili at the opening of the election campaign on June 8.  “Other political forces also have a responsibility.”

In addition, mid-term municipal elections on May 22 were marred by violence when several Georgian Dream supporters beat up UNM members at a polling station in the village of Kortskheli in western Georgia.

“Unfortunately, there is a danger the situation will escalate before and during the election.  In Georgia, the election environment, political forces and the media are very polarised,” Kakachia said.

“Moreover, avoiding [escalation] depends not only on the authorities, but also on how one or the other party will be able to accept the election results.”

Rusudan Machaidze is a freelance journalist in Tbilisi and Giorgi Kupatadze is IWPR editor in Georgia.