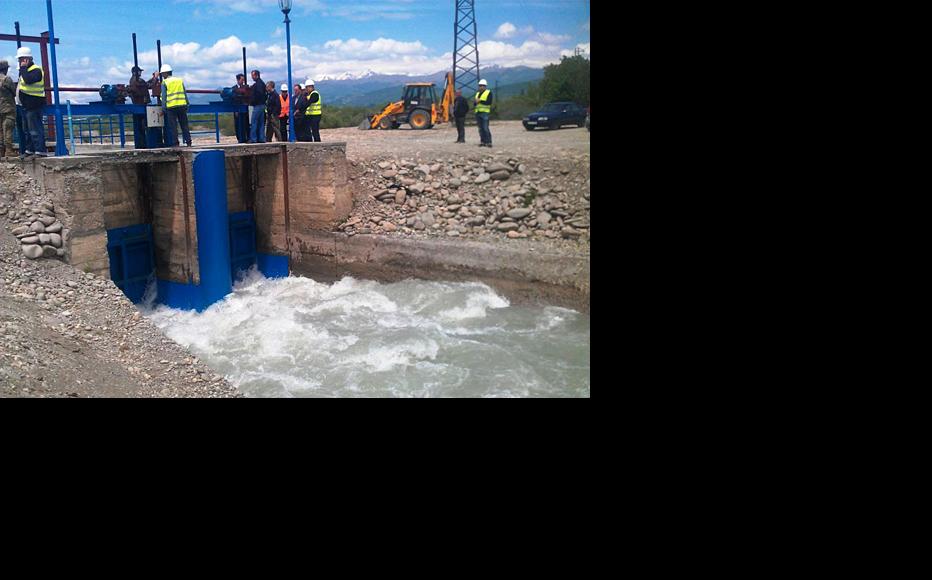 Ongoing repair work on the Tirifoni canal in Georgian-controlled territory. (Photo: Goga Aptsiauri)
The link has been copied

A seemingly modest agreement between the Georgian and South Ossetian authorities concerning waterways that cross a contested boundary is a rare example of cooperation between two sides in an otherwise intractable dispute.

Villagers living on both sides of the boundary are likely to benefit from the agreement to share in clearing and maintaining the Tirifoni irrigation system.

South Ossetia has claimed independence from Georgia since a conflict in the early 1990s, and its ally Moscow recognised it as a sovereign state following the Russian-Georgian war of August 2008. Georgia’s insistence that South Ossetia lies firmly within its borders is supported by most of the international community.

Communities on either side of the dividing line have watched their gardens and vineyards shrivel up since the 2008 war ended, leaving the Zonkari reservoir – the main water source for the Tirifoni canal system – inside South Ossetian-controlled territory.

The agreement was discussed at meetings held in June and July under the Incident Prevention and Response Mechanism, a talks forum that has existed since 2009 and is facilitated by the OSCE and the European Union Monitoring Mission in Georgia (EUMM). Regular meetings are held to discuss problems affecting communities in the conflict zone, such as arbitrary detentions of villagers and access to farmland, but there have been few significant achievements.

Recent meetings, however, have produced a breakthrough on the Tirifoni irrigation issue. South Ossetian negotiators promised to clear the waterway and provide a sufficient flow of water, while the Georgians pledged to ensure that water reached ten South Ossetian villages located further down the course of the canal system.

Following talks on July 30, EUMM head Kęstutis Jankauskas expressed satisfaction at what he said was the most significant bilateral accord reached since he took office.

“Great work has been done,” said Nana Gvimradze from the Georgian village of Kabri. “People will finally settle down. Although there are sometimes delays, we’re hoping to fix that. Water is in short supply over the drought season of August through September, so we’ll at least take turns to irrigate our plots of land in order to prevent the remaining crops from drying up.”

Immediately after the 2008 war, the South Ossetian authorities blocked the Tirifoni waterway, leaving Georgian communities on the other side, as well as the ten South Ossetian villages located downstream, with no irrigation.

In an earlier set of discussions, the South Ossetians suggested that they might let the irrigation water flow in exchange for a supply of Georgian natural gas for their Akhalgori district (which Ossetians call Leningorsky). The Georgian government rejected this on the grounds that Russian troops based nearby would also get access to the gas. The talks reached a dead end, and the South Ossetians pressed ahead with a pipeline project to bring in gas from Russia to the north.

The Georgians began building an alternative irrigation system drawing water from the river Liakhvi. Pumps were installed to transfer water to the Tirifoni canal. This proved a less than perfect solution, as the pumps were often out of action, and the South Ossetians responded by stopping water flowing out of the Zonkari reservoir into the river Patara Liakhvi (a tributary of the Liakhvi) and from there into the canal.

More problems arose when control systems at the Zonkari reservoir jammed and it began to overfill. Experts warned that unless water was drained off, a massive flood wave would engulf the South Ossetian settlement of Dmenisi and continue onwards to cause damage to Georgia’s Gori municipality.

Despite bringing in experts from Russia, the South Ossetians were unable to unblock the controls. Negotiations then began with the Georgians and international funding was secured to bring in the equipment needed to get the dam sluices working again.

The water level in the Zonkari reservoir is now being monitored by South Ossetian experts, while the Georgians continue to refurbish the Tirifoni canal.

Last year, the Georgians restored part of the canal at a cost of around six million US dollars, with funding from the United States development agency USAID. This improved irrigation for the farmlands around 39 Georgian villages.

The waterway is not yet fully operational, but both sides have committed themselves to use an EUMM hotline to ensure that local people get water during the dry months of August and September.

“I think what we have agreed on is a very positive thing,” said EUMM head Jankauskas. “The exchange of information via a hotline under the EU Monitoring Mission on the water level in the reservoir and the use of treated areas of the waterway will continue, so that more people can use the irrigation canal.”

Khoh Gagloity, head of the South Ossetian delegation, said experts from both sides would continue to communicate on how to regulate water levels.

“The Tirifoni irrigation canal was polluted and as a result it retained water,” he said. “At this stage, the immediate work has been done on our side and the canal is now ready. We have agreed to keep in touch via the hotline so as to inform each other about starting or stopping the flow and about water levels.”

Georgia’s national water company has been involved in the negotiations, and its water supply expert, Gela Zoziashvili, says levels are now stable and expected to rise.

“Right now, there’s a shortage of water as irrigation season is reaching its peak. It’s therefore important to know the precise amount of water in the Zonkari reservoir. Judging from the amount of rainfall over the past few months, there’s got to be water in the reservoir.”

Zoziashvili said he suspected that some sections of the canal were still clogged up as the volume of water had not risen to the anticipated levels. But he stressed that the main thing was that communication was taking place.

“The Ossetians are prepared to cooperate. We’re having an intensive exchange of information via the hotline. They’ve already appointed a contact person who is responsible for keeping in touch with us,” he said.

Goga Aptsiauri works for RFE/RL and is the winner of the European Union’s 2014 Peace Journalism prize.