“The suffering these men went through in the moments leading up to their deaths must have been unbearable”, judge says.

“The suffering these men went through in the moments leading up to their deaths must have been unbearable”, judge says. 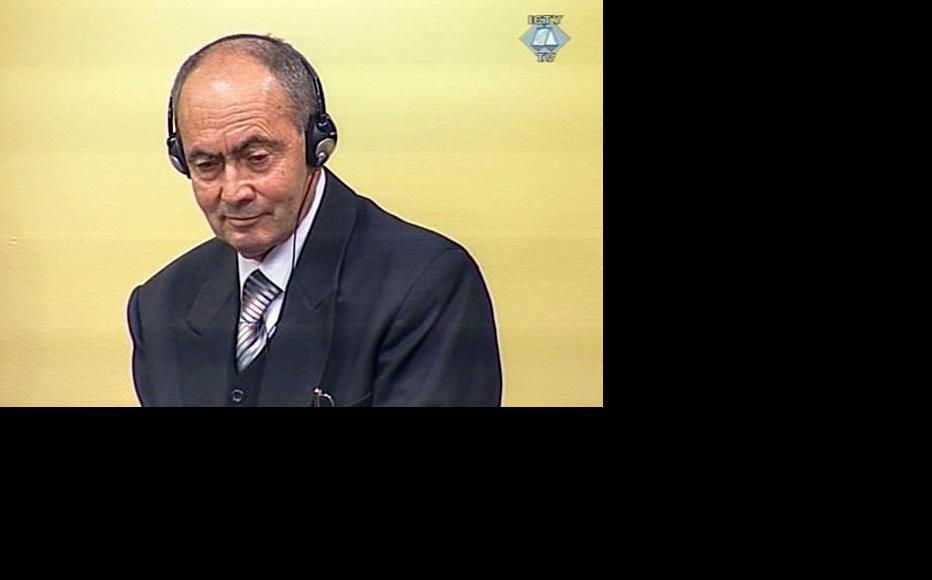 Zdravko Tolimir, convicted of genocide for his role in the 1995 Srebrenica massacre. (Photo: ICTY)
The link has been copied

Judges at the Hague tribunal this week convicted wartime Bosnian Serb general Zdravko Tolimir of genocide for his role in the 1995 Srebrenica massacre and sentenced him to life in prison.

Tolimir, who was assistant commander for intelligence and security in the Bosnian Serb army or VRS, was found guilty of conspiring to commit genocide, extermination, murder, persecution and inhumane acts through forcible transfer. He was acquitted of charges of deportation.

When presiding Judge Christoph Flugge told Tolimir to stand for the pronouncement of sentence, the 64-year-old accused made the sign of the cross several times and removed his glasses, but otherwise showed no emotion.

Tolomir’s wife, seated in the first row of a packed public gallery, wept openly. A group of survivors seated a few rows behind her responded by yelling, “Why didn’t you cry then? Our kids don’t have fathers.”

The Srebrenica massacre is considered the worst single atrocity to take place on European soil since the Second World War.

Judges in the Tolimir case found that at least 4,970 Bosnian Muslim men and boys were murdered in the days following the fall of the town in July 1995, but stressed that the total number is “at minimum closer to 6,000”. Other estimates have put the number of dead closer to 8,000.

“The chamber has found that the suffering these men went through in the moments leading up to their deaths must have been unbearable,” Judge Flugge said as he read out the verdict. “On many occasions, those who were waiting to be shot saw others before them executed. The few survivors who lived to provide their testimony… gave harrowing accounts of what they had to endure.”

Tolimir reported directly to the VRS’s commander, Ratko Mladic, who is currently standing trial at the tribunal.

Judge Flugge pointed to witness testimony describing Tolimir as Mladic’s “right hand”, his “eyes and ears” and “closer to being an equal than a subordinate”.

The judge said that given Tolimir’s senior position, “he had a legal duty to protect prisoners of war”.

Two of Tolimir’s subordinates, VRS officers Vujadin Popovic and Ljubisa Beara, were found guilty in June 2010 of committing genocide in Srebrenica and were sentenced to life in prison. Five other co-defendants in that trial were convicted on lesser charges relating to the massacre. The case is currently on appeal. (See Convictions in Srebrenica Seven Trial.)

Judge Flugge spent a considerable amount of time describing the events leading up to the fall of the Srebrenica enclave – which had previously been declared a United Nations “safe area” – on July 11, 1995.

Four months earlier, in March 1995, a document called “Directive 7” was drafted and signed by Bosnian Serb president Radovan Karadzic, who is also standing trial at the tribunal.

“This directive… called for the creation of an ‘unbearable situation of total insecurity with no hope of further survival for the inhabitants of Srebrenica and Zepa’ to be achieved through ‘planned and well-thought out combat operations’,” Judge Flugge said.

This document was drafted with the assistance of “various sectors within the [VRS] main staff. This included the sector of intelligence and security affairs headed by the accused,” the judge continued.

Srebrenica fell to Bosnian Serb forces on July 11 with “no resistance.” Judge Flugge referred to the now infamous video footage of Ratko Mladic taking a “triumphant walk through the town” declaring that “the time has come to take revenge on the Turks in this region”.

Three meetings were subsequently held at the Hotel Fontana in Bratunac on July 11 and 12, attended by the UN peacekeeping force’s Dutch battalion commander Thomas Karremans, by a Muslim schoolteacher chosen to represent the civilian population, and by senior VRS officers including Mladic.

Judges found that the Bosnian Serb army officers created a “threatening and intimidating atmosphere” and that Mladic told the Muslim representative that the local population could either “survive or disappear”.

While Tolimir was not present at these meetings, one of his intelligence officers was, and the chamber concluded that he “was informed and had knowledge of the discussions held at these meetings”.

By the end of July 12, some 30,000 civilians had descended on the UN compound in nearby Potocari. Bosnian Serb forces took over the compound, disarmed members of the Dutch battalion, and “cursed, mocked and mistreated Bosnian Muslim civilians”, Judge Flugge said.

“Some were handed out bread and water while being filmed by a Serb camera crew. The moment the camera crew stopped filming, the forces stopped handing out bread, and even took some of it back,” he continued.

Thousands of Bosnian Muslim women and children were then put on buses brought in by the Bosnian Serb army. Their male family members were detained at several locations near the compound, the judge said.

“The majority has found that by the end of 12 July, 9,000 Bosnian Muslims had been forcibly transferred by bus from Potocari to Kladanj. Those that remained, awaiting their forcible transfer the next day, endured a night that was described as hell; moans and screams resonated amongst the crowd,” Judge Flugge said.

Conditions were so miserable, the judge said, that “several Bosnian Muslim civilians committed suicide or attempted to do so”.

By the morning of July 13, he continued, “everyone was desperate to leave Potocari…The majority [on the tribunal bench] has found… that under these appalling circumstances, the Bosnian Muslim population gathered in Potocari had no choice but to leave.”

The 1,000 men and boys who had been separated from their families at Potocari were held in “horrid conditions” before being transported by bus to Bratunac, where they were joined by thousands of other Bosnian Muslim males who had been captured or had surrendered while trying to break out of VRS-held territory.

The men and boys were then transported by bus to various locations, and were killed, Judge Flugge said.

In one instance, on the evening of July 13 through to the next day, hundreds of Bosnian Muslim men were “packed full” inside the Kravica warehouse near Bratunac and shot by VRS troops “using machine guns as well as hand and rocket-propelled grenades.”

“They fired for hours, with intermittent lulls in the shooting in which the wounded moaned and called out names,” Judge Flugge said.

Tolimir’s immediate subordinate Ljubisa Beara was, the judge said, “directly involved in the burial operation of between 600 and 1,000 Bosnian Muslim men who the chamber found had been murdered at the warehouse between 13 and 14 July 1995”.

The bench found that at around the same time, hundreds of Bosnian Muslim males were taken to a school near Orahovac, and from there transported to different sites where they were killed.

“One of the groups of prisoners included a boy of approximately five to six years old, who, after being shot at, stood up from a pile of bodies and called out for his father,” Judge Flugge said.

A majority of the chamber also concluded that 4,400 Bosnian Muslim women, children and elderly were “forcibly removed” from the nearby Zepa enclave between July 25 and 27, 1995. This was done “under the direct authority of the accused who was present in the enclave for the entire operation”.

Tolimir apparently added that the only alternative to the “evacuation” of the population was “the use of military force”.

The bench further concluded that genocide was committed in Zepa.

“The majority has found that in the case of Zepa, removing its Bosnian Muslim civilian population, destroying their homes and their mosque, and killing three of their most prominent leaders was done with the purpose of ensuring that the Bosnian Muslim population of this enclave would not be able to reconstitute itself,” Judge Flugge said.

In conclusion, the bench found that Tolimir was part of a joint criminal enterprise, JCE, whose purpose was to “forcibly remove the Bosnian Muslim population from the enclaves from March 1995 onwards”; and that he “became a member of [another] JCE to murder the able-bodied men from Srebrenica”.

“[Tolimir] had full knowledge of the despicable criminal operations envisioned by these two enterprises and shared the intent to further their goals,” Judge Flugge said.

The verdict, however, was not unanimous. One judge, Prisca Matimba Nyambe of Zambia, states in her 36- page dissenting opinion that she would have acquitted Tolimir of all charges.

The evidence, she contends, “is entirely circumstantial, based on presumptions, suppositions, and [Tolimir’s] professional association with those who committed the crimes that are the subject of this indictment”.

There is nothing “linking him to the crimes committed by his subordinates, nor does the evidence suggest that he knew those crimes were being perpetrated”, Judge Nyambe states.

She further questions the facts established by the majority.

For example, where the other judges found that Bosnian Serb soldiers mistreated and “terrorised” civilians gathered at the UN compound in Potocari, Judge Nyambe said that the screams and moans heard in the crowd could have been due to “scuffles occurring in such a huge mass of people”.

Judge Nyambe further disagrees with the majority on the “intimidating and dominant” atmosphere created by Mladic and other officers at the Hotel Fontana meetings prior to the massacre. The meetings were videotaped, and these recordings were submitted as evidence in the trial.

“In fact,” the judge contends, “Mladic is welcoming, offering comforts to the attendees such as cigarettes, beer and sandwiches for lunch.”

Balkans, Bosnia and Herzegovina
Connect with us