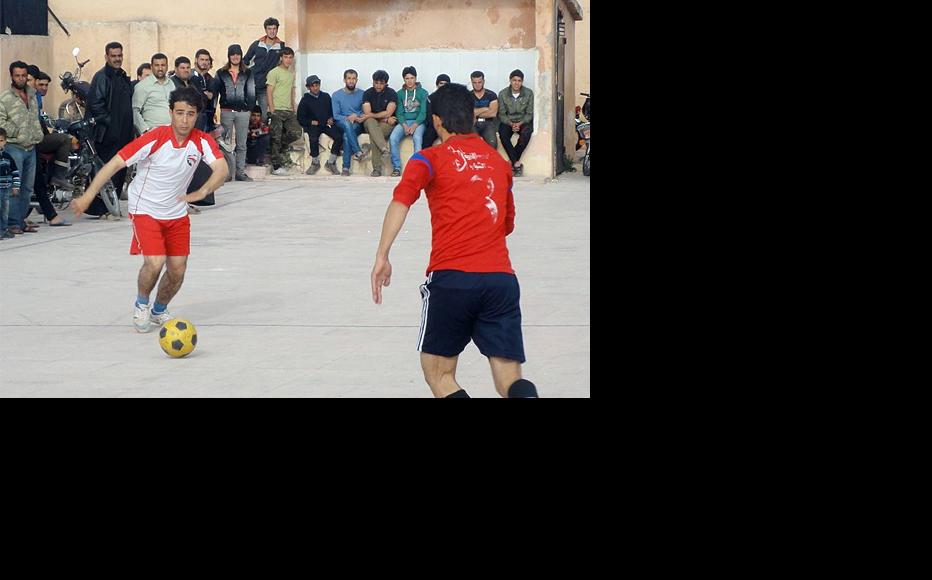 Footballers compete during a regional championship match. (Photo: Ahmad al-Salim)
The link has been copied

The town of Hass is in Syria’s Idlib province, and has been liberated from Syrian government forces. One of its school playgrounds is now crowded with men.

Loud voices erupt every now and then, but today the men aren’t shouting, they are cheering.

The crowd has gathered here to watch a seven-a-side football match, part of a regional championship involving16 teams. Each team must have seven players and four reserves, plus its own kit, and be a member of one of four groups that form the league.

A special committee which is sponsoring this match has paid for fresh lines to be painted on the football pitch, new goal posts, and a number of footballs.

“We used to charge new team members a joining fee to pay for maintaining the pitches and buying shirts and footballs,” said 22-year-old player Suleiman al-Zaidan. “But now we have sponsors who cover these expenses.”

This is the second year of the regional championship, and Zaidan says teams are trying to recruit the best players to win the title, proving how successful the event has become. He also speaks fondly of the spectators, saying their cheering makes the games all the more enjoyable.

Not all the players are as unqualified in their enthusiasm. For instance, 30-year-old Abu Salah believes there is room for improvement. “A lot of problems happen during matches because the referees don’t understand the rules of football properly,” he said.

“Most of our referees are chosen because they are experienced players who are passionate about the game,” he said. “Many teach PE in schools, while others are former national football league referees.”

Despite the league’s teething troubles, the fans are hugely appreciative of the matches, which offer a break from the daily round of conflict.

“We adore football. It’s the only thing that reduces our suffering in this unending war,” said Mohammad Kallas, a 25-year-old construction worker. “The championship has given people a chance to revive their love for football, a love they abandoned for four years due to the daily death and bombardment.”

Another challenge facing organisers is the occasional skirmishes between fans. They have alerted local opposition police, and officers now patrol areas where matches are taking place to defuse disputes before things get nasty.

“We’re doing our best to help make the championship a success,” said 37-year-old security officer Abu Abdullah. “We try to resolve disputes among players and fans, but sometimes we find ourselves obliged to jail hooligans for a few days.”

One of the main sponsors of this year’s championship is an organisation called Daa Basmatak (“Leave Your Mark”), which builds learning centres for children and supports sports activities for both youngsters and adults.

“We are sponsoring this championship in order to encourage former athletes and football lovers to engage in sports again,” said 25-year-old Ihab al-Bakur from Daa Basmatak. “We’ll be presenting the winners and runners-up with symbolic gifts to encourage team members to keep playing.”

Fans of the championship have created a Facebook page where they publish updates and photos of the matches.

“We’d like the photos to be viewed by as many people possible,” said page administrator Khaled al-Yahya. “We’re hoping this will encourage players from other villages in Idlib to attend and participate. We’d like the world to see that we are not afraid to play football while President Bashar al-Assad’s military planes are in the sky.”

The threat of aerial attack does worry some local residents who fear football crowds could attract unwelcome attention.

“Government helicopters have bombed this neighbourhood on several previous occasions, and destroyed many buildings,” said Abu Yasser, 46. “We’re worried that if they spot the increasing crowds, they’ll start bombing the neighbourhood again.”

Abu Yasser and a number of other local people are submitting a petition to the championship’s organisers asking them to relocate it. In the meantime, the matches and the cheering go on.

Ahmad al-Akla is the pseudonym of a Damascus Bureau contributor living in Idlib, Syria.