Mixed-sect couples describe the difficulty of keeping marriages alive in times of war. By Abeer Mohammed in Baghdad

Mixed-sect couples describe the difficulty of keeping marriages alive in times of war. By Abeer Mohammed in Baghdad 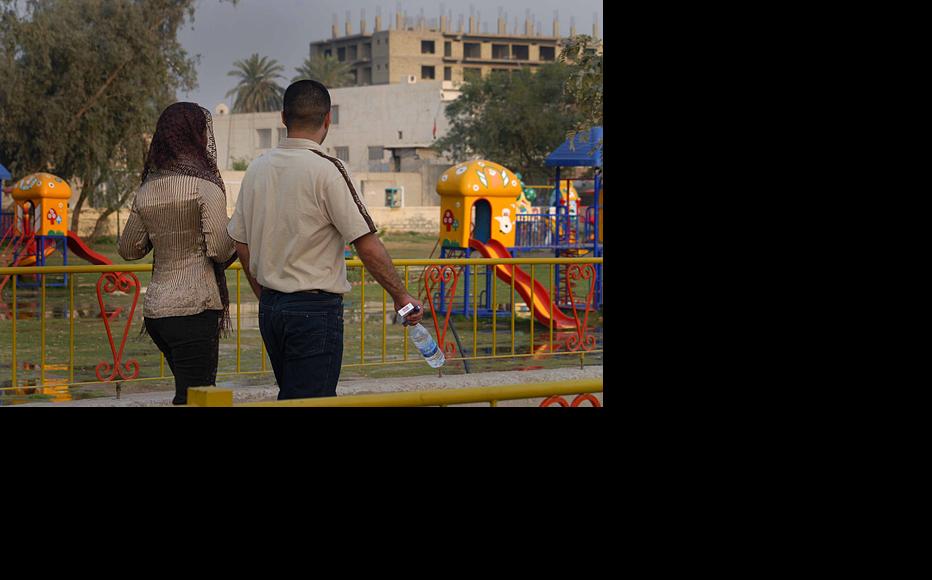 Sectarian tensions have put a huge strain on mixed marriages. Photo by Jamal Penjweny
The link has been copied

When Fatima and Yasin first traded glances in a Baghdad marketplace, they were blind to the ancient discord that would wrench their country apart.

She was shopping for clothes, he was passing by with friends, and having seen him once, she knew only that she wanted to see him again.

He slipped her his phone number and they spoke that very night, embarking on a romance that paid little attention to his Sunni background or her Shia origins.

The aching chasm that is Iraq’s sectarian divide today was a relatively subtle distinction a decade ago, easily dismissed by a couple in love.

“It was not a problem in 1999 for a Sunni man to marry a Shia woman,” recalled Fatima, speaking to IWPR on condition that her real name, and that of the man she wed, be concealed. “It was okay with my family as well as his.”

At the height of the conflict between the Shia and Sunnis in 2006, the couple had two children and a house in the Yarmuk district of western Baghdad.

When their neighbourhood became a stronghold of the Sunni insurgency, the sectarian balance inside their family began to seem increasingly precarious.

Tormented by death threats on the phone, Fatima eventually moved out, taking the children with her to Kadhamiya, a Shia neighbourhood where her parents had a home.

Yasin stayed behind in Yarmuk. One day he collected the children, saying he would take them on a picnic, and did not return.

“Within a week, I found out that he had taken the children to Syria,” Fatima said. “His parents had convinced him that his marriage to me was a mistake.”

“They told him that even if I was a good person, my relatives were Shia and might kill him at any time to avenge their community.  They arranged a marriage for their son in Syria with a Sunni girl.”

The sectarian conflict that followed the United States-led invasion reshaped hundreds of neighbourhoods and communities, reversing centuries of co-existence, but rarely did it divide the building block on which Iraqi society is built – the family.

Its frontline ran not so much through households as through the districts where Sunni and Shia had lived in close proximity.

Neighbours and colleagues became enemies, purging each other from boroughs and institutions where the boundaries of sect had been allowed to blur.

Amid the carnage, structures such as the family and the tribe grew stronger because they were largely immune to sectarian division.

In a land shared by Sunni and Shia Arabs since the dawn of their faith, most marriages take place within the same sect.

Fatima and Yasin are poignant exceptions - members of a sizeable minority whose marriage disregarded sectarian division.

The two were reconciled after Yasin contacted Fatima and begged her forgiveness, saying he missed her. He rejected the match his parents had planned for him, instead inviting Fatima to Syria. The couple still live there.

“Sectarianism nearly killed me and cost me my family. I crossed the divide and I still feel the pain,” said Fatima, speaking to IWPR during a recent trip to visit relatives in Baghdad.

“I’m still paying the price by living in a foreign country,” she said. Though the conflict has eased since 2006, Fatima said she had no plans to return – the “sectarian atmosphere” of Iraq could still corrode her marriage.

No official figures are available for how many Iraqi couples have crossed the sectarian divide. Marriage certificates contain no record of sect and nor does the law permit divorce on sectarian grounds.

All the mixed-sect couples interviewed by IWPR asked for their real names to be withheld. Their stories bear several striking similarities, testifying often to the tenacity of love amid the tribulations of war.

They also offer a window into a domestic environment where tensions can be stoked by topics as varied as the children’s faith, visits from in-laws and the daily news of politicking, bombings and killings.

“As long as my wife is not interested in politics, we do not have sectarian problems,” said Ahmed, a Shia man in his forties, with a job in the motor industry in Baghdad. “She was, and still is, a beautiful lady.”

He married Maysun, the daughter of a Sunni family in his neighbourhood, despite some initial opposition from her brother.

“He asked to talk to me alone, he was worried about his sister. We had a long conversation about all the religious issues and since then, he’s been my best friend,” Ahmed said.

The couple’s children have been brought up to follow their father’s Shia faith. Maysun said she adopted the Shia way of praying when in the presence of her in-laws.

“Sometimes I get annoyed when I hear his relatives criticise Sunni clerics whom they accuse of issuing edicts to kill the Shia,” she said.

She added that Ahmed would usually dispel the tension by caressing her and teasingly saying such things as, “I love your terrorist’s eyes.”

Ahmed said the years of sectarian fighting put a strain on all Iraqis. He guiltily recalled returning to his wife after the funeral of a friend who had been killed in a bombing in a Baghdad market.

“I hated all Sunnis at that moment,” he said. “My wife consoled me and said, ‘God will bless your friend.’ I responded, saying He would not bless the Sunni terrorists.”

“She looked at me, astonished, but did not say a word. I wanted to apologise to her but I did not.”

The routine violence and the fractured politics of modern Iraq seem to continually test mixed-sect relationships.

Neda, a Shia accountant in her late thirties, met her husband, Salim, a Sunni security guard, at a friend’s wedding.

“I loved his pride and wanted to talk to him,” she said, laughing. “But back then, we never talked about politics or religion like we do now.”

Neda said she and her husband have argued over the names to assign their children. “I want Shia names and he wants Sunni names,” she said, adding that they managed to agree on a “compromise” name for their eldest daughter, which was popular with both sects.

The couple has yet to decide on what sect to instruct their three children to follow. “Whenever we talked about the issue, it led to a quarrel,” she said.

“We will probably adopt a sectarian quota like our politicians, so one child is Sunni, the other Shia, and so on,” she laughed, referring to the system by which powerful posts are allocated by Iraq’s parliament.

In the recent election, the couple disagreed over whom to vote for, each one favouring the front-runner most closely identified with their sect. Neda said they eventually struck a deal to both vote for a lesser-known candidate whose name they picked at random.

“We have crises but we overcome them because we are a family, we have kids. It is not easy to break such a relationship,” she said.

Some mixed families have tried to reduce conflict by avoiding any mention of sect whatsoever.

Fatima said she wanted her children to choose their own sect when they were older, and resented visits from her in-laws, who insisted on making the entire family pray in the Sunni manner.

She said some arguments with her husband had been triggered by remarks made by in-laws. Her parents tended to blame Sunnis for any bombings.

On the other hand, she said her husband had once told her massacres against the Shia were justified, after hearing that his cousin had gone missing in a Shia neighbourhood.

“I hardly slept that night, and I regretted my marriage,” she said.

Despite these incidents, Fatima said she believed the survival of her relationship was proof that sectarianism could be overcome.

“Blood and tears have been shed in the name of sect but this can be avoided if people make a choice,” she said.

Alia, a 40-year-old civil servant from Baghdad, found that choice very difficult. The daughter of a Shia scholar, she said she never considered her sect until her brother was abducted and killed by Sunnis three years ago.

“A Sunni suitor proposed to me,” she said, but the offer was rejected. “Things have become complicated. My family cannot forget the spilt blood of their son.”

The number of mixed-sect marriages is believed to have fallen sharply during the recent conflict, from the levels it enjoyed during the relatively secular government of Saddam Hussein. As a calm of sorts returns to Iraq, some observers say such relationships are making a comeback.

Fadhil Kamil, a professor of sociology at Mustansariya University in Baghdad, said the popularity of mixed-sect relationships increased in times of stability, indicating that they may serve a useful social function.

“In a torn community, marriages help overcome the hatreds of the past,” he said.

Religious leaders from both sects said there was no official ban on marriages between their followers.

Sheikh Hamdallah al-Shehani, a Shia cleric allied to the anti-American preacher Muqtada al-Sadr, confirmed there was no ban on marriages between sects and added that there also no obligation for spouses to convert. However, he cautioned Shia against marrying Sunni who did not respect their faith.