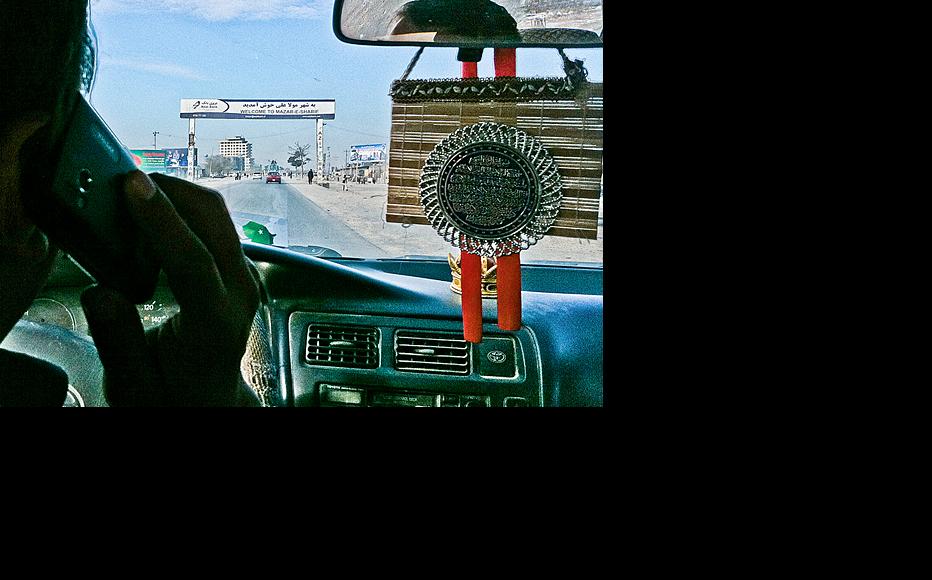 A taxi driver in Mazar e-Sharif. (Photo: Peretz Partensky/Flickr)
The link has been copied

Sara claims to be Afghanistan’s first-ever female taxi driver. Dressed in old clothes, with a striped scarf fastened around her head in the style favoured by local men, the 45-year-old widow first started driving a cab as a way of providing for her four children and mother-in-law.

Her husband, a taxi driver himself, was shot dead by the Taleban as he plied the route between Mazar-e Sharif and Maimana, the main town in Faryab province to the west.

“There was no other breadwinner in our family,” she said. “I spent four or five years in great poverty and distress. After that, I decided to drive a taxi.

“I am not scared of anyone. I just avoid going to distant places, and that’s because I don’t want my car stolen.”

Sara is happy with her new career, which earns her up to 15 US dollars a day. Because of her age, she says, customers call her “mother” and treat her with respect.

Being a female driver even has extra advantages.

“Women prefer to take my taxi, so some of the male drivers are jealous,” she said, laughing.

Sara may claim to be the first female cab driver in Afghanistan, but she is no longer the only one. A handful of women in Mazar-e Sharif have begun driving taxis, something unheard of anywhere else in the country.

Prior to the civil war of the early 1990s, some women had private cars and were even employed as drivers by the government-owned Milli Bus transport system, but that disappeared when the Taleban came to power.

Although women over the age of 18 have a legal right to obtain a driving license, Afghanistan remains a deeply conservative country and it is rare to see women behind the wheel in even big cities. (See also Herat Women in the Driving Seat.)

Hussein Safa, director of the traffic department for Balkh province, said that improved security across the province meant that dozens of women had obtained driving licenses.

“We don’t know how many women are driving in Balkh, nor do we need to know, because every man and woman has the right to use a vehicle,” he said. “Everyone is subject to the same privileges and penalties before the law. No one has the right to create problems for women driving.”

Gulalai Hotak, head of the labour and social affairs department in the provincial government, said the fact that women could drive taxis was due to the relative security that prevailed in Balkh.

“I am proud to be labour and social affairs director in a province where the first female taxi drivers have emerged,” she added.

Some women say they prefer to be able to call on female cabbies, rather than getting into a taxi with a man or using overcrowded minibuses.

Rika, a teacher at the Maulana Jalaluddin Balkhi high school for girls, has a monthly contract with a female taxi driver to take her to and from work each day.

“I feel at ease with a female driver. I don’t have to cover my face with a scarf, since the driver is a woman,” she said, adding that female drivers were less stressed and drove more slowly than their male counterparts. That too made her feel safer, she said.

It is not only women who praise the female drivers. Munir, who works for a foreign organisation, said he had hired Sara as a driver for a week, and had been delighted with her performance.

“Sara was a very punctual, brave and well-known person,” he said. “When I went somewhere in her taxi, the people, police and traffic personnel would show her respect. She was very friendly with everyone and I felt very comfortable with her.”

Abdul Jamil, a traffic policeman in Mazar-e Sharif, said women made better drivers than men as they paid closer attention to the rules of the road.

He said he was yet to witness an accident involving a woman driver, adding, “They are worthy of respect, because they don’t break the rules.”

Fatima, another female taxi driver, said she had previously worked on monthly contracts with lecturers and her own female relatives who needed to be ferried to and from the university.

Her last job was a month’s work for the campaign team of one of the presidential candidates in the April 5 election, whom she declined to name.

“I’m scared of another candidate who has very bad people, and if they find out that my car was serving a rival candidate, they will harm me,” she explained.

As well as taxi drivers, there are women driving private cars around Mazar-e Sharif.

Maria Rahin, a lecturer at Balkh university and a longtime driver, said improved security had reduced the risks for women like her who chose to drive.

“I have faced no problems in the time I’ve been driving. Some people give me odd looks at times,” she said, adding with a smile, “I hate it when I get a puncture when I’m outside the city.”

Unsurprisingly, some male taxi drivers are not pleased about the competition.

Gholam Mustafa, a taxi driver in Mazar-e Sharif, claimed that women were only able to drive cars with automatic rather than manual gearboxes.

“If they break down somewhere, they have to leave the car with the passengers and escape,” he said with a smile.

If the number of female taxi drivers increased, he added, it would take custom away from drivers like him, since male customers would choose their cabs so that they could flirt with them.

As for the general public, the view that there is something inherently shameful about women driving is hard to shake off.

“I have seen an elderly woman driving a taxi and people don’t engage with her,” Hajji Hashim, a shopkeeper in Mazar-e Sharif, said. “But I don’t know whether the young women who drive taxis do so out of genuine need or because of some moral corruption. People say all kinds of things about them, but God only knows what the truth is.”