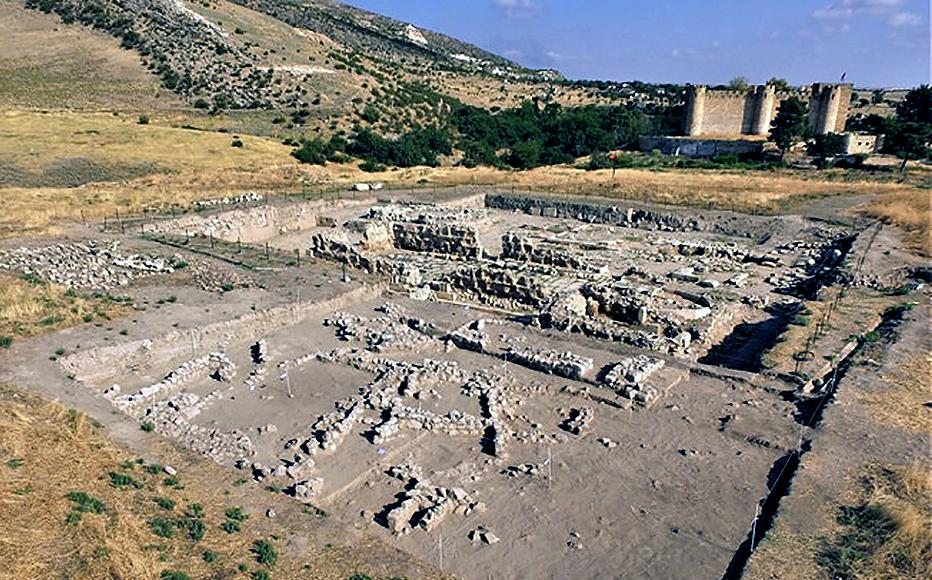 The ruins of Tigranakert, an ancient Armenian city now located within the disputed Nagorny-Karabakh region. (Photo: Official Website of Tigranakert)
The link has been copied

Fears are growing that a wealth of Armenian cultural, historical and religious heritage in areas now under Azerbaijani control are under threat.

Some sites were damaged in fighting before the November 9 ceasefire agreement, while officials and experts warn that the Azerbaijani side may try to destroy others or deny their links to Armenian history.

On October 8, Azerbaijani forces twice shelled the Ghazanchetsots Cathedral in Shushi with high-precision weapons. Later, the church was desecrated, with inscriptions scrawled on its walls.

A few days after the capture of Shushi, Azerbaijani social media users posted a video showing the 1847 church of St John the Baptist being vandalized.

Father Mesrop Mkrtchyan, the religious head of the Shushi region, said that of the five churches local churches three had been destroyed during the Soviet era. Only Ghazanchetsots, built in 1887, and St John the Baptist survived, and both were now under Azerbaijani jurisdiction.

The Mother See of Holy Etchmiadzin issued a statement condemning the acts of vandalism.

“The attitude towards our spiritual and cultural values is an extension of Azerbaijan’s long-standing policy against Armenian culture. In an attempt to erase the traces of the Armenian heritage in Artsakh [the Armenian name for Karabakh], they are trying to erase all the evidence of the historical belonging of our homeland,” the statement said.

“This is going to have an extremely negative impact on our vision of the future, as well as on our future generation and our faith,” said Lusine Karakhanyan, the minister of education and science of the de facto Karabakh government. “I have a feeling that we are entering a civilizational crisis.”

In Hadrut, Armenians also lost the residence of the meliks, the historic feudal rulers of the territory, the archeological site of ancient Tigranakert, the Kataro Monastery and the Azokh museum, as well as dozens of churches and hundreds of historic stone crosses known as khachkars. They now fear for the future of all these monuments.

“We managed to save the exhibits from the Tigranakert and Berdzor museums and the Kerensky mausoleum, a private collection of carpets of high cultural value were taken out of Shushi,” Karakhanyan continued. “We managed to evacuate something from the Kashatagh region, but many valuable museum exhibits remained in Hadrut and Shushi. The culture is literally left unprotected there, because it was difficult to predict the outcome of hostilities in Hadrut and especially in Shushi. We did not expect the fall of Shushi.”

The head of the department for culture and youth at the Hadrut regional administration, Yerazik Avanesyan, said that Armenian history there went back thousands of years, with churches dating back to the third century.

“We did not have time to save anything, and the videos distributed by them show how the exhibits of Hadrut museums are thrown into fires, how the acts of vandalism are committed in the local museum named after Artur Mkrtchyan [the first chairman of the Karabakh Supreme Council], how art schools, houses of culture are set on fire,” he said, adding, “The worst thing is that they post everything on social networks and display it to the public without a twinge of conscience… they do not care, because the international community will not react anyway, just as it did not react to what they did to us.”

French President Emmanuel Macron also tweeted that France was also ready to use its experience to help preserve cultural and religious heritage in and around Karabakh.

But Armenian deputy minister of culture Narine Khachatryan said that these efforts amounted to nothing more than a display of “moral support” as there were no effective protection mechanisms in place.

“Let’s say, UNESCO declares that it takes it [cultural heritage] under its protection, but what else can they do there? Send peacekeepers or rescuers?” she asked.

Ethnographer Hranush Kharatyan said that the anti-Armenian policy pursued by Azerbaijan in recent decades meant that the fate of many cultural and historical monuments was indeed under threat. She recalled Azerbaijan’s systematic destruction of a medieval necropolis in Djulfa in Nakhichevan.

“UNESCO has never addressed Nakhijevan [the Armenian word for Nakhichevan], neither did the OSCE, within which a special committee was established to ensure implementation of the European Convention; there is even a commissioner who is obliged to be in the field in order to respond quickly,” Kharatyan said.

Many have set their hopes on the Russian peacekeepers.

“According to the trilateral agreement, Russia is the peacekeeper, and I think we have to put emphasis on that, they should not allow the monuments to be destroyed,” Avanesyan said.

“Maybe it’s not right to lose faith in international institutions, but what is happening now, in front of the eyes of the international community, is hard to process,” added Karakhanyan. “Now all my hopes are set on Russian peacekeepers; we gave them a list of the 26 most famous monuments, which they vowed to protect. After all, a monument is something that is directly linked to identity. Defacement of monuments leads to identity issues.”

The ancient town of Tigranakert is now also under Azerbaijani control. It was built in the first century BC by the Armenian king Tigran the Great, who founded four cities named Tigranakert across the Armenian kingdom. Its exact location was only discovered in 2005, and excavations began the following year.

The head of the archaeological team Hamlet Petrosyan – also head of the cultural studies department at Yerevan State University - told IWPR that he feared the site was in grave peril.

“It is not out of the question that new excavations will be urgently carried out in Tigranakert, and the city-fortress, built by the great Armenian king Tigran, will be presented to the world as Albanian,” he said. “Violent seizure is the worst thing; it leads to the destruction of artifacts, alteration of names and toponyms.

“They will be trying to prove that it is not Armenian. At first they will keep a couple of significant things, but then they will gradually destroy them. They are already saying that Armenian inscriptions were engraved on artifacts only in the 19th century which is absurd and only indicates how greedy the conquerors are.”

The historian said that between 2,000 and 2,500 historical and cultural monuments remained in the territories now under Azerbaijani control.

“They want to erase all traces of the Armenians,” Petrosyan continued. “First, they change the name… and then the appearance and function. They will erase everything that, in their opinion, is associated with Armenianness.”

“Our scientific community, historians, researchers know that the war continues, and all wars are fought in the name of culture,” Karakhanyan said. “This war is not armed, but no less important.”

Giving Voice, Driving Change - from the Borderland to the Steppes
Armenia, Karabakh
Culture, Conflict
Connect with us