Kazakstan’s former capital has become a magnet for ambitious young Central Asians, attracted not just by opportunities but also by welcoming environment.

Kazakstan’s former capital has become a magnet for ambitious young Central Asians, attracted not just by opportunities but also by welcoming environment. 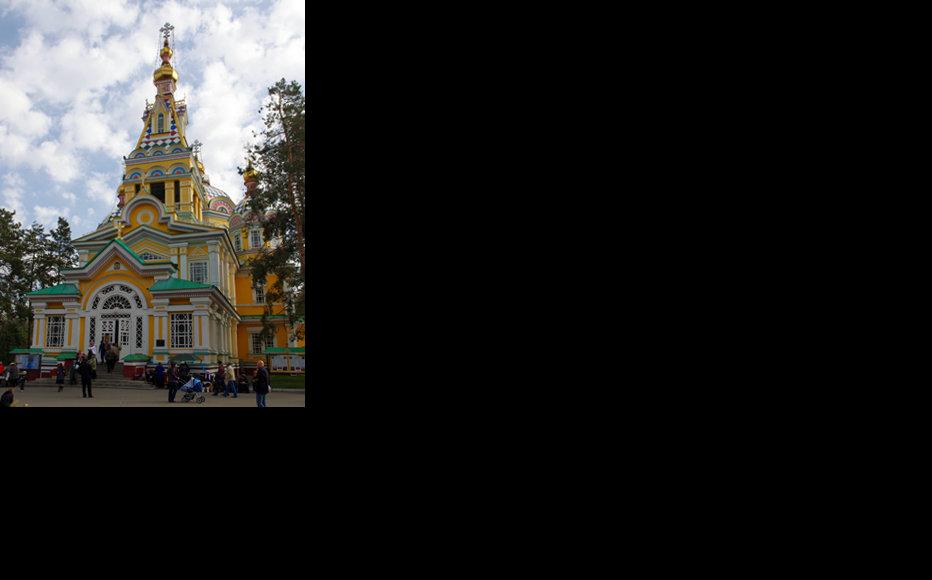 The wooden Cathedral of the Ascension in Almaty was completed in 1907 and is one of the very few older buildings to have survived earthquakes and urban planning. (Photo: Ken and Nyetta/Flickr)
The link has been copied

Kazakstan’s financial centre Almaty is a regional hub that attracts high-calibre professionals from across Central Asia. The city offers them better job prospects and cultural and ethnic diversity.

Almaty is flanked by snowcapped mountains and apple orchards, and unlike other parts of Kazakstan, it is blessed with a mild continental climate.

The traditional mix of Russians, Koreans and Uighurs who have lived alongside Kazaks here for generations has been augmented by the Tajik, Uzbek and Kyrgyz labour migrants who have arrived in the years since Kazakstan became independent in 1991. More recently, small Chinese and Indian communities have emerged here.

The city is popular with western nationals, as well. Many of the international organisations and news services working in Central Asia such as Reuters, AP and the BBC have their regional offices here.

The city is just three hours drive away from Bishkek, the capital of Kyrgyzstan, where I live. Things have certainly changed in Almaty since I was last here 15 years ago.

I used to feel at home here, as Almaty and Bishkek share the same kind of Soviet architecture - big squares, long straight streets and 20th century buildings. The two cities used to look almost identical – but not any more.

The construction work of Kazakstan’s oil boom has left Almaty sprawling in all directions. Modern office buildings, shopping centres, cafes and restaurants have sprung up on the once green foothills of Koktobe on the city’s southeastern outskirts. At the other end of town, buildings have proliferated on what were once grasslands.

But there is something I do recognise from the past, something that not all of Central Asia’s cities have been able to keep alive – the spirit of unity. In a way, it invokes nostalgia for Soviet times, when people used to travel freely and frequently to neighbouring republics to see relatives and friends.

These days, it is the younger generation of educated people from all across Central Asia who come to Almaty in search of better-paid, prestigious jobs. Market reforms and oil wealth mean Kazakstan has the most prosperous economy in the region.

Many people who come to Almaty find it comforting that, as in the old days, Russian is still widely used. The multicultural environment means that new arrivals are not made to feel like outsiders.

Among these incomers is my colleague Almaz Rysaliev, IWPR’s editor for Kazakstan who has lived in Almaty for the last six years. He settled here after marrying a Kazak woman. He says it helped that Kyrgyz and Kazaks have such similar cultures, but adds that mixed marriages between the various ethnic groups here are common.

Although Almaty, Kazakstan’s largest city with some 1.5 million people, lost its status as national capital in 1997 – that honour moved to Astana, some 1,260 km away in the centre of the country - it retains its position as a centre of culture and business.

It also feels safe, and people are open. In Bishkek, many people prefer to use official taxis to get around, whereas in Almaty, people feel secure enough to flag down any car on the street – although it’s worth agreeing a price before getting in to avoid being overcharged.

Many highly skilled professionals from Kyrgyzstan, Uzbekistan and Tajikistan work at senior management level in Almaty companies. People from Kyrgyzstan, in particular, are keen to find work here, and Almaty’s attractive power has even been blamed for the collapse of a Kyrgyz government programme to lure medical graduates to work in rural areas.

My best experience in Almaty has to be taking part in last year’s informal gathering of young IT specialists, online journalists and bloggers. The annual BarCamp Central Asia events – sponsored by IT and mobile phone companies and held in different cities across the region – are intended to encourage the exchange of ideas and networking. As well as people from the Central Asia republics, there are also participants from Europe and the United States.

Unlike other BarCamp meetings in the region, the ones held in Almaty are always well attended, which makes them more interesting as well.

It was good to see how people from Kyrgyzstan who lived through the ethnic violence of June 2010 were able to put aside their differences once they were on neutral ground. It did not matter whether you were a Kyrgyz or Uzbek – everyone was happy to take part in lively debates. And in between sessions, groups got together to sing traditional songs while others listened, or cooked national dishes for everyone to taste.

The global financial crisis has reduced the numbers of Central Asians heading to Almaty, but the city has not lost its appeal. Its inviting atmosphere – which fortunately comes not from market forces but from the openness and friendliness of its residents – has stayed the same.