Was rally in Tbilisi a sign of renewed strength, or a last gasp?

Was rally in Tbilisi a sign of renewed strength, or a last gasp? 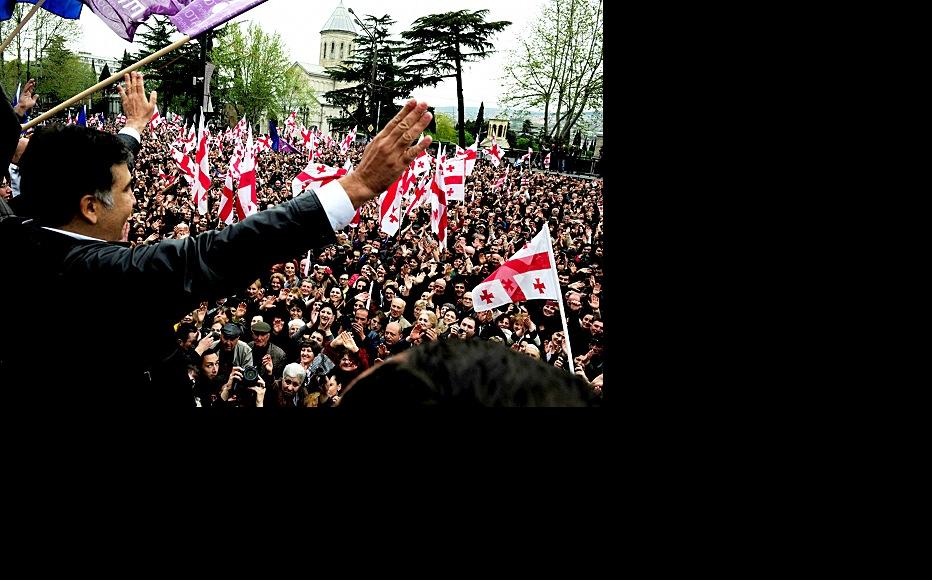 For the first time since his party suffered a crushing defeat in an election last October, Georgian president Mikheil Saakashvili has called his supporters out onto the street, accusing his political opponents of pushing the country back towards Russia.

Analysts saw the April 19 protest as a success insofar as it showed that Saakashvili’s United National Movement, UNM, retained its vitality and was capable of operating as an effective opposition to the Georgian Dream government that replaced it. Others, however, said the turnout, estimated at between 5,000 and 10,000, was a poor showing, and reflected a lack of support for the UNM now that it was out of power.

Although Saakashvili remains president, the position has lost much of its power following constitutional changes. The dominant force in politics is now Prime Minister Bidzina Ivanishvili and his Georgian Dream coalition.

The UNM flagged up the demonstration two months ago, saying it intended to stand up for Georgia’s geopolitical interests.

Saakashvili kept his supporters waiting for more than an hour before appearing in typically flamboyant style. As he passed through the crowd, it parted to let him through. Climbing onto the stage, he delivered an emotional speech in which he defended his legacy of investment in social projects and police reform, and accused Ivanishvili’s government of ditching his pro-European policies.

“They are turning the country back to the past,” Saakashvili told the crowd. “They are abandoning the Euro-Atlantic course and returning Georgia to Russia’s orbit.”

He rejected the criticisms levelled by former UNM members, who have held Vano Merabishvili, the party’s general secretary and a former interior minister, responsible for prison torture that, in leaked videos, provoked massive protests on the eve of last year’s election.

“These people won’t do the government any good… and we have got rid of some rats,” the president said.

The crowd applauded him loudly, particularly when he said that he would not be leaving politics when his second and last term as president ends this October, and that he would make sure Georgia continued along the path of European integration.

Georgian Dream members, meanwhile, said they were baffled at the reasons behind the demonstration, since they had no intention of altering current foreign policy.

“It’s interesting that a demonstration with this slogan should take place after we passed a resolution in parliament that there would be no change to the country’s foreign policy,” said Levan Berdzenishvili, a leading politician from the bloc.

Analysts said the real reason for holding this UNM event was made plain by David Bakradze, a former speaker of parliament, when he addressed the crowd.

“Today’s demonstration shows that the rumours of the death of the National Movement are exaggerated. We are alive,” he said.

Nika Chitadze, head of the International Security Studies Centre in Tbilisi, said the demonstration represented the UNM’s first venture into the kind of street politics that its opponents used for the nine years it spent in power.

“People have seen that the UNM is a real opposition. After [the election of] October 1, everyone said the movement was a political corpse,” he said. “This demonstration has shown that the party and a significant section of society is capable of opposing the current government.”

Kakha Gogolashvili, head of the Centre for European Studies, agreed that this was the UNM’s first step towards becoming a proper opposition party.

“Recently, there’s been constant talk about how the UNM enjoys no popularity, doesn’t have supporters, and so on. So it had to demonstrate that it does have support,” he said. “Secondly, they needed to present new ideas and show the public that they are an evolving force that can avoid ending up in crisis because of the mistakes they’ve made and their election defeat.”

Not everyone agrees that the UNM is on the road to recovery. Khatuna Lagazidze, a social affairs expert at Tbilisi State University, said the relatively small numbers of protesters indicated that the party was in no position to make a comeback, especially since its control of Tbilisi city hall should guaranteed it a core of support.

“If you think of the human resources that the UNM has in local government in Tbilisi and in other parts of the administration, they could have gathered at least five times as many people as they did, but… it didn’t even help them,” she said. “That shows that a reincarnation is impossible.”