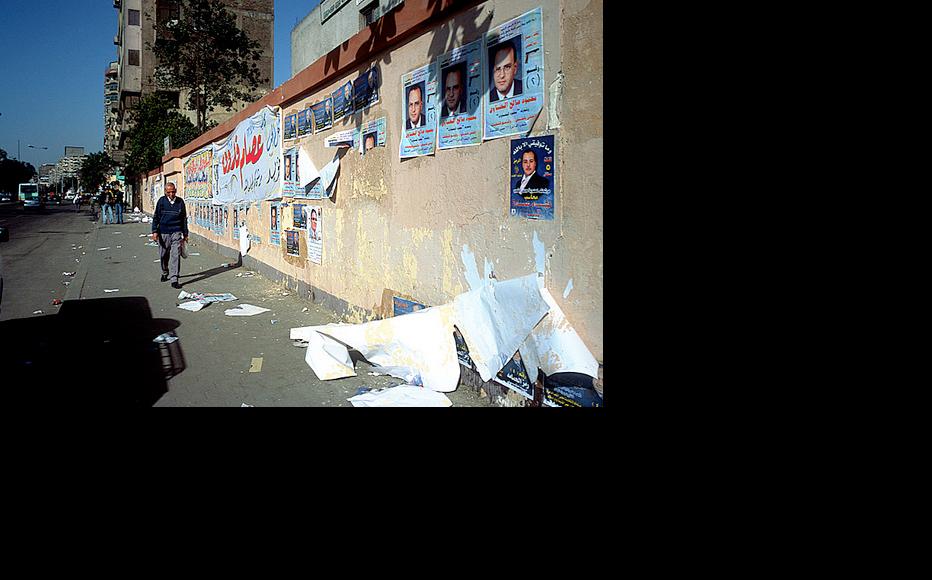 Election posters in Cairo. (Photo: Kim Chi Hoon/Flickr)
The link has been copied

The election success of two Islamist parties in Egypt is worrying liberals and pro-democracy groups, who fear that policy and lawmaking will be increasingly influenced by religious canon.

Although the election cycle for the lower house of parliament is far from over, it already looks almost certain that any future government will be dominated by the Islamist parties, which between them have won more than 60 per cent of the vote to date.

The Freedom and Justice Party, FJP – the political party of the Muslim Brotherhood – announced on December 7 that it had 37 per cent of the vote in elections so far. By the end of the first of three election phases, consisting of a November 28-29 vote followed by a run-off ballot on December 5-6, it said it had taken 36 of the 56 seats up for grabs.

By the time the three phases are over on January 11, 498 of the 508 seats in the lower house should have been filled; the other ten will be appointed by the ruling Supreme Council of the Armed Forces, SCAF. This will be followed by elections for the upper chamber and for the Egyptian presidency.

While the FJP’s lead was predicted by analysts, support for Al-Nour – the party of the Islamic fundamentalist Salafi movement – came as more of a shock. Al-Nour gained 24 per cent of the vote, far ahead of the liberal Egyptian Bloc with just 13 per cent.

“Egyptians are reacting badly to both the FJP's landslide in the first stage and in particular the surprising results achieved by the Salafi Al-Nour party,” Sarah Carr, a journalist working in Cairo, said. “Christians are understandably worried, as are liberal Egyptians who fear an Islamist agenda will undermine their personal freedoms. While there is a certain amount of hysteria on the part of liberals, the Muslim Brotherhood are viewed by some as opportunists, and more importantly, turncoats who will do anything to realise their ambitions.”

Analysts say the solid electoral support for FJP is unsurprising given that the Muslim Brotherhood, established in 1928, has a long history as the only weighty and credible opposition force.

“They have widespread support because they stand for everything Mubarak’s regime wasn’t,” Andrea Teti, a lecturer in international relations at the University of Aberdeen, said. “They have been building a grassroots organisation for many years, and they have had lots of funding from private donors in the Gulf – in particular from Saudi Arabia and Qatar- to assist with their campaigning and educational programmes.”

In part, the reason why other political parties have not won more support, Teti said, can be put down to lack of funding and chaotic, last-minute organisation in the run-up to these elections. Combined with the violent clashes between SCAF’s forces and protestors in Tahrir Square just days before the ballot, this left many voters bewildered.

"The electoral process is really messy and we should not underestimate this. For example, a lot of the voters are illiterate and would have picked a candidate based on a symbol on the ballot paper, or perhaps even based on personal factors," Teti said.

“There is a lot of confusion and misinformation.People don’t know many of the political organisations behind the names because they are so new and have not had time to do any campaigning,” he said.

Looking ahead, Abbas said, "the real objective should be to build up an organisation to rival the Muslim Brotherhood".

Analysts say much of the Muslim Brotherhood’s support is rooted among Egypt's poor, many of them living in rural areas, because it provides free medical services and education.

A report published in June by the London-based think tank Chatham House suggested that newly-emerging Egyptian parties should “be in touch with the needs of the population and in particular those in more remote areas: at the moment parties are focusing on political issues but they need to develop health and education programmes”.

The report warned that Egyptians needed to see improvements to their social and economic circumstances in the next two years because “if the dire conditions that played a significant role in propelling the revolution are not improved, political instability will continue”.

Egypt's Coptic Christians, who constitute at least ten per cent of the 80-million population, are concerned.

“The results are very disappointing for Copts and we will see more leaving Egypt in years to come,” Helmy Guirguis, chair of the UK Copts Association, said, adding that 100,000 had already left since the uprising began in January.

While the Muslim Brotherhood is promising to accommodate the Copts by ensuring they are represented in the lower house of parliament, Guirguis dismisses this is as a tactical move that masks the group’s true intentions.

If current voting trends hold up, the FJP and Al-Nour stand to take around 200 of the lower-house seats allocated by proportional representation, plus a chunk of the 166 seats set aside to be contested by individuals, some of whom will be politically affiliated.

“A coalition between the Muslim Brotherhood and Salafists would seem an obvious direction to reach out to voters,” Teti said.

At the same time, the Muslim Brotherhood will have to balance cooperation with Al-Nour with efforts to placate those inside and particularly outside Egypt who fear a drift towards extremism and harsh Islamic laws.

“The Muslim Brotherhood is keen to be accepted internationally and will want to reassure," Teti said, predicting that the group would “make lots of concessions on things like divorce and on the role of women”.

Guirguis was concerned that any concessions would be purely cosmetic.

“The Muslim Brotherhood are playing lip-service to the US and the West,” he said, “but we will slowly see shariah law taking hold in all aspects of society.”

The Arab Spring
Egypt
Elections
Connect with us