Tensions grows after violence on October 9 which left 26 people dead and more than 300 injured.

Tensions grows after violence on October 9 which left 26 people dead and more than 300 injured. 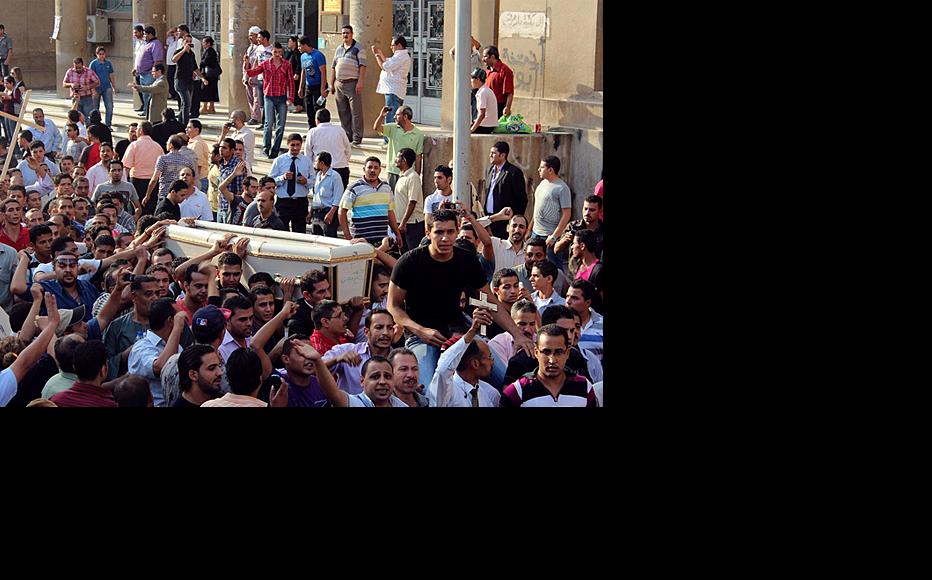 A funeral for one of the victims of the violence of October 9. (Photo: Bora S Kamel/Flickr)
The link has been copied

On Sunday, the biggest shock was that the violence came from the army. This was a tragedy. I don’t know how to explain it. Maybe some of the soldiers had been brainwashed by religious extremists? For soldiers to attack unarmed civilians in that way is just terrible. One of the soldiers who was injured was later interviewed on national TV insulting and cursing Christians.

All this could have been avoided if the Supreme Council of the Armed Forces, SCAF, had arrested those people who were responsible for recent attacks on churches. If they had reacted in a decent way and brought them to justice then this would not have happened. There have been so many incidents, including a Coptic man who had his ear cut off in Upper Egypt in March, a church which was burnt in Sole. Nobody has yet been held to account.

Amongst my Christian friends, co-workers and neighbours a lot of people are scared. This is a very worrying and stressful time. I fear when my wife drives to work with our daughter – you hear stories that in some parts of Cairo people are stopped and asked about their religion. I don’t know personally if this is true, but it has been reported on the TV too.

I did support the revolution back in January but I was also worried that with the old regime gone, Salafis let out of prison and general insecurity, Christians would face threats. They were there before the revolution, but the frequency of attacks was much less. During Mubarak’s 30 years in power there were maybe six high-profile attacks on churches and Christians. But in the last nine months, there have been four or five.

Personally, I have never faced any discrimination at work, and I have a lot of Muslim friends who are very open-minded and tolerant. But you face anti-Christian prejudice all the time here. The speeches that can be heard every Friday from the mosques are often full of agitation against non-believers. Sometimes these are specifically about Christians; other times they indirectly mention “infidels who worship the son of God”. This happens a lot, especially on television, where such speeches are broadcast on national stations.

We are free to practise our religion in Egypt, and we do so, but the point is that every few weeks someone attacks us in our churches. It is about justice and our rights – our right to renovate a church if we want to (the cause of recent attacks in southern Egypt) and our right to be protected from fanatics. If someone attacks a church, they need to be caught and prosecuted.

Most of my Muslim friends said how sorry they were about the events. But many less educated Muslims still blame the protesters and the Copts for igniting the latest tensions, and some say we deserved what happened because we attacked the army. But what kind of crazy unarmed demonstrators would attack armed soldiers? We are surrounded here by a huge army of lies.

It is still very unsure what the elections in November will bring. If liberal parties come to power, then the Christians will have nothing to worry about. As for the Muslim Brotherhood, it is very hard to be clear what their view is towards many things. I have followed some speeches or interviews in which a representative can be take quite an intimidating position, but then the next day another member will say something else. The Salafi position is clearer, although they also have a range of groups, some of which are more tolerant and others which are more aggressive.

I believe Christians will keep on demanding our rights until we realise them, otherwise more animosity will result. The church has called a three-day fast and we will keep on protesting peacefully until those attackers and soldiers responsible for murdering unarmed protesters are brought to justice.

Bassem Raouf, 41, works in a travel agency in Cairo.

The Arab Spring
Egypt
Connect with us