Some believe their region is wealthy enough to support itself when the fighting stops.

Some believe their region is wealthy enough to support itself when the fighting stops. 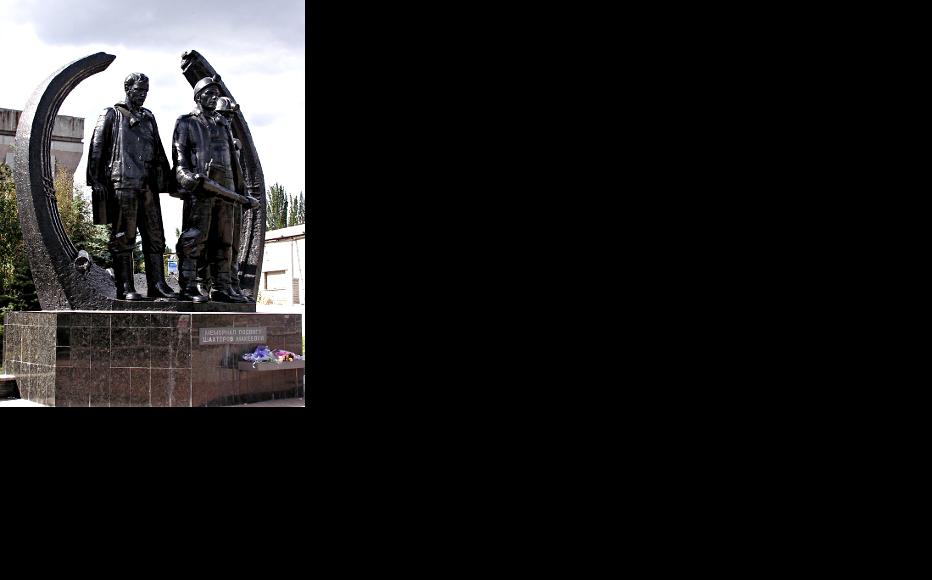 Memorial to the coalminers of Makiyivka. (Photo: Andrew Butko/Wikimedia Commons)
The link has been copied

As renewed violence threatens to derail the fragile ceasefire in eastern Ukraine, a straw poll carried out by IWPR in the town of Makiyivka, the scene of heavy fighting last month, has found continuing support for the separatist insurgency.

Many interviewees in the town were optimistic about a future “Novorossia”, the title adopted by the self-declared Donetsk and Luhansk People’s Republics for their nascent state.

They argued that the region has the resources to be support itself, and voiced anger at their treatment by central government in Kiev.

Others, however, said the conflict has taken a heavy toll and they would prefer to remain part of Ukraine rather form a separate state.

Novorossia, or “New Russia”, was a historical term for areas north of the Black Sea brought under Russian rule in the 18th century, approximating to parts of modern-day Ukraine.

Russian president Vladimir Putin has made at least two pointed references to Novorossia.

In April, during a televised question-and-answer session lasting nearly four hours, he said, “I would like to remind you that what was called Novorossia back in tsarist days – Kharkov, Lugansk, Donetsk, Kherson, Nikolayev and Odessa – was not part of Ukraine back then…. Russia lost these territories for various reasons, but the people remained.”

More recently, Putin referred to the rebels as “the militia of Novorossia”.

“I see my future only in the Donetsk People’s Republic or in Novorossia,” said Tamara, 52, an unemployed mine worker in Makiyivka. “Ukraine will no longer exist, because Novorossia will grow very quickly and seize other parts of the country. All the other Ukrainian cities will join us, because justice must prevail.”

Coal mining and metals plants made the Donbas or Donets basin a powerhouse of Soviet industry. Many residents of Makiyivka (Makeyevka in Russian), an industrial town near the city of Donetsk, still believe that coal and metals production is profitable and will sustain the region.

“The war will be over soon,” Irina, 54, another unemployed mine worker, assured IWPR. “Makiyivka will have a brilliant future as a part of the Donetsk People’s Republic. Our army will provide security, and our fine industry will allow us to earn the money to cover all our outgoings.”

Irina used to work at a mine whose ownership was split 50-50 between private business and the state. The mine is now defunct and she is out of work.

Supporters of the Novorossia project argue that Donbas props up the rest of Ukraine’s economy.

“I would like Kiev to change its attitude toward us,” said Boris, 36, who works in a shop. “After all, this is an industrial region, and the rest of Ukraine has taken most of our income in the form of taxes. Seventy per cent went to Kiev and only 30 per cent was left for us.”

According to the government’s statistical agency, that is plain wrong. In the first half of 2013, Donetsk region contributed 3.85 billion hryvnia to government revenues but received 13.1 billion in spending including grants and subsidies. The region thus received about 720 million US dollars (at the present exchange rate) more than it contributed over that six-month period.

For comparison, the Lviv region of western Ukraine made a net contribution of more than 356 million hryvnia (28 million dollars) to the treasury over the same period. According to the government’s official gazette, that means that someone living in a place like Makiyivka effectively benefited from 142 dollars in government spending, while a Lviv resident handed over ten dollars.

According to 2012 figures from Ukraine’s state agency for statistics, the Donetsk region contributed a hefty 11.7 per cent of the nation’s gross domestic product. But this masks the fact that mining has been running at a loss, surviving on government subsidies which cover the difference between the production cost and market price of coal.

Ukrainian prime minister Arseny Yatsenyuk recently said that “if the miners stayed at home and received their usual wages, Ukraine would lose less money than if they went to work”.

Perceptions in Makiyivka are often very different, reflecting a deep resentment at the sense that the industrial east has been exploited and misused by the Kiev government.

“I don’t like Kiev giving us instructions,” said Boris, 36. “We can raise the necessary funds in our own budget and cover all expenditure including social programmes and law enforcement.”

Boris would like the conflict to be resolved peacefully and swiftly, but he is against a return to the old status quo. “I would like Novorossia to be created here instead of Ukraine,” he said..

Igor, a 54-year-old businessman, said it was out of the question to remain within Ukraine.

“When they bomb you, would you agree to remain part of Ukraine? Hardly,” he said “Russia hasn’t taken us over, so it’s likely to be the Donetsk People’s Republic. After all, we’ve had a referendum [legitimising this, in May].”

“I thought we’d live in peace, even as part of Ukraine, but nothing of the sort happened. I would agree to the Donetsk People’s Republic remaining part of Ukraine as long as there was a complete transformation of power in Kiev. But that will never happen.”

Igor’s vision of the economic future rests on the belief that wealthy businessmen, chief among them Rinat Akhmetov, can be made to contribute taxes and create jobs or face compulsory buyouts.

Not everyone in Makiyivka is so committed to the separatist cause. Some say the stark reality of conflict had eroded support for autonomy.

Another factor, Lilya said, was that the separatist forces had behaved so lawlessly, imposing a 10pm curfew so that anyone on the streets could be detained and only released after paying a bribe.

Yuri, a 52-year-old man who has a clothing business, said he too had observed a shift in attitudes in the town.

“Many of my friends support the Donetsk People’s Republic, but after the outbreak of hostilities, some of them changed their opinions,” he said. “Most people in Makiyivka voted in the referendum, but I didn’t.”

Yuri predicts that “when the war is over in two or three month’s time, Donbas will still be part of Ukraine”.

For others, the political and economic obstacles facing the region mean there are few positive options left.

“Looking at the war and events in Donbas, I’m left with no cause for optimism about the future,” sales consultant Yevgen, 28, said. “I would like to see local people return and small-to-medium businesses grow in Donbas. It would be great to have targeted government programmes that would support entrepreneurs reviving our region, creating jobs and restoring the economy.

“At the moment, though, I tend towards pessimistic thoughts that Donbas will become a buffer zone and a transit corridor connecting Russia with occupied Crimea.”