DRC Calm as Kabila Sworn In

DRC Calm as Kabila Sworn In 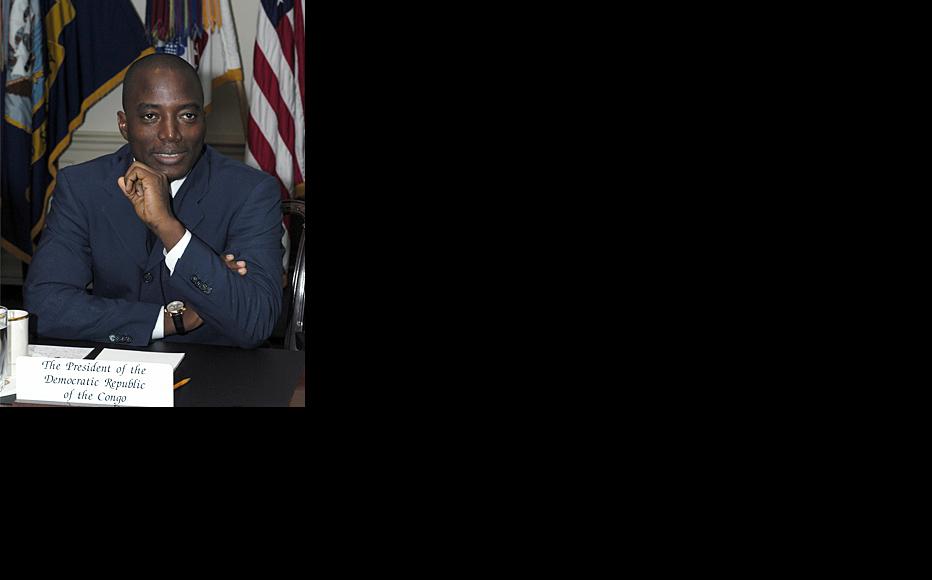 Joseph Kabila’s re-election as president of the Democratic Republic of Congo sparked protests and allegation the vote was unfair. (Photo : Helene C. Stikkel/Wikimedia Commons)
The link has been copied

As Joseph Kabila was sworn in for a second presidential term on December 20, the Democratic Republic of Congo, DRC, was largely calm. But human rights groups and other observers are calling for an end to arbitrary arrests and the detention of opposition supporters who have protested against the president’s re-election.

Allegations of widespread irregularities and fraud during the November 28 polls have cast doubts over the credibility of the DRC’s second democratic vote.

But fears of protests and a violent response from government forces when the final results were announced did not materialise.

Eighteen people were killed and 100 seriously injured in the run up to the voting between 26 and 28 November, according to the New York-based advocacy group Human Rights Watch. A further 24 were killed by security forces following the announcement of provisional results on December 9, the organisation says.

In the past two weeks, the Congolese authorities have mobilised a heavy security presence in the capital Kinshasa and all other major cities, to defuse protests by opposition supporters contesting the election results.

The London-based rights group Amnesty International has called for an end to what it says is a swathe of politically-motivated arrests.

“The Congolese security forces seem to be taking advantage of the tense climate of uncertainty following the recent elections,” the organisation’s Africa deputy director, Paule Rigaud, said. “These arrests must end. Those detained must be released unless they are promptly charged with a legitimate criminal offence and brought before a judge to challenge the legality of their detention.”

Amnesty International cites dozens of arrests across the DRC which “frequently target members and supporters of the political opposition”.

According to the Independent National Electoral Commission, CENI, Kabila beat his rival from the Union for Democracy and Social Progress, UDPS, Etienne Tshisekedi, and won 49 per cent of the vote.

The vote count was challenged by the third-placed candidate, Vital Kamerhe, of the Union for the Congolese Nation, UNC, but on December 16 the Supreme Court upheld the result and confirmed Kabila as the winner.

The ballot has been heavily criticised by international election observers including from the European Union and the Carter Center.

According to the Carter Centre, the elections were subject to “serious irregularities, including the loss of nearly 2,000 polling station results in Kinshasa”.

The organisation also reported that several polling stations in Katanga province in the east of the country logged a turnout of 99 or 100 per cent, with most votes going to Kabila. Nationwide, turnout was just 58 per cent.

US Secretary of State Hillary Clinton said Washington was "deeply disappointed" by the Supreme Court’s decision to uphold the result.

Mass opposition to the results has been countered by the deployment of large numbers of security forces and the arrest of protest leaders. On December 20, tanks were deployed in Kinshasa to stop the opposition from protesting as Kabila was sworn in for a second mandate.

In Goma, the capital of the eastern province of North Kivu, four opposition leaders were arrested on December 13, following their attempt to organise what the authorities claim was an unauthorised demonstration.

Goma has remained peaceful throughout the electoral process.

Rubens Mikindo, the UDPS leader in North Kivu, Alex Bahuma of the UNC, and two others face charges of “disturbing public order” and “distributing false information to incite the population to rebel against the established order”.

According to the Congolese constitution, anyone planning a demonstration does not have to get advance permission from the local authorities but must notify them of the time, place and nature of the proposed event.

When Mikindo appeared in court last week, he showed the judge a letter in which he had notified Goma’s mayor of the intended demonstration.

However, the local authorities say that organisers did not give them sufficient notice of the planned march.

In Bukavu, capital of South Kivu province, eight arrests were made on December 20 when opposition members tried to march through the street to protest against Kabila’s re-election.

The opposition leaders claim that their protest was arranged two weeks ago and that they notified the authorities. But police dispersed the demonstrators and made eight arrests including the UDPS leader for the province.

Radio Okapi, a United Nations-funded national radio station, reported that heavily-armed security forces have been deployed in all strategic areas of Bukavu, making the city seem like “it is under siege”.

Analysts and human rights groups accuse the security forces of acting in a heavy-handed fashion and denying people the right of peaceful assembly.

“In the Congolese constitution, the freedom to demonstrate is guaranteed, therefore unless public order was disturbed there is no reason to arrest protesters,” Thierry Vircoulon, director of the Central African programme at the International Crisis Group, said.

Others say such measures are not justified, particularly in areas such as Goma which have remained peaceful throughout the electoral process.

On December 3, the government suspended all texting services from mobile phones until further notice. It said that the measure was necessary to “maintain public order”. Human rights activists have denounced the ban as a violation of civil liberties.

“It is an obvious infringement to everyone’s right to communicate. Not everyone is rich enough to call instead of text. We hope that the measure will be lifted soon,” said D’Acquin.

The mayor of Goma, Busanga Maliaseme, insisted the deployment of security forces and restrictions on phone texts were justified by the volatility of the election period.

“It was important that we anticipate possible incidents. It’s a very sensitive situation,” he said.

The various measures taken by the authorities to maintain order appear to have been effective in limiting protests and the level of violence.

"The lack of protest is clearly a result of limits placed on peaceful demonstration by the government,” said Laura Seay, an expert on the DRC and professor of political science at Morehouse University in the US.

“I think there is a strong desire among opposition supporters in the population – especially in Kinshasa and the Kasais [regions] – to demonstrate against Kabila.”

Contrary to what many observers predicted, the unrest has not been widespread, with violence limited to a few hot spots, particularly the capital.

"Thus far, the level of violence has been much lower than many observers feared we would see. Human Rights Watch reports that at least 24 have been killed in post-election violence. While this is certainly tragic, it is very low on the scale of violence that could have been reached as the situation has progressed," said Seay.

And with the exception of the attempted demonstration in Bukavu no protests were held when the Supreme Court rubber stamped the election results on 16 December.

However, if a temporary clampdown grows into something longer term and the opposition continues to be prevented from protesting, the calm could be deceptive.

“A problem arises in the question of what Tshisekedi and other opposition leaders and their supporters will do if they are never allowed to peacefully protest an election that they believe to be fraudulent,” Seay said.