On the eve of general elections, people in northeastern region want stability and development.

On the eve of general elections, people in northeastern region want stability and development. 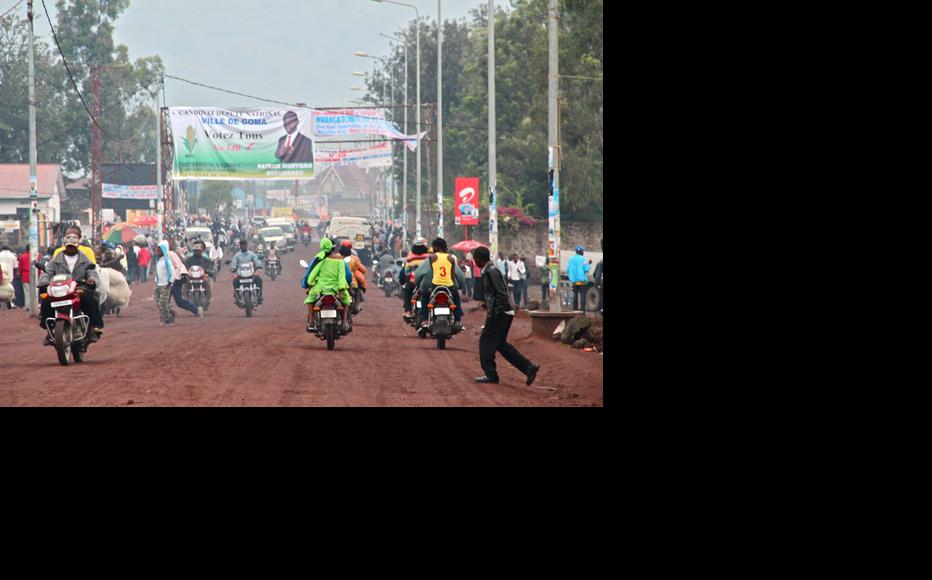 An election poster in Goma. (Photo: Melanie Gouby)
The link has been copied

The presidential and parliamentarian elections in the Democratic Republic of Congo, DRC, scheduled for November 28, are seen as a crucial turning point, particularly in the eastern province of North Kivu.

However widespread frustration at the lack of progress since the 2006 polls, coupled with fears that disputed results could spark renewed violence, is sapping enthusiasm among the electorate.

“I want to vote on Monday. I’ll go and cast my ballot,” said a lawyer in the eastern town of Goma who wanted to remain anonymous. “We need to believe in democracy, but it feels like it’s democracy that doesn’t believe in us.”

The DRC is near the bottom of every ranking of world countries for economic development, health and human rights.

People living in North Kivu are aware of the region’s huge potential, and have grown ever more frustrated by their leaders’ failure to bring about stability and prosperity.

The 2006 elections, which were overseen by the United Nations and attracted a 70 per cent turnout, were perceived as free and fair.

The incumbent president, Joseph Kabila, won in the second round against Jean-Pierre Bemba, a former vice-president who is now standing trial at the International Criminal Court in The Hague.

But preparations for the 2011 elections have been handled mainly by the Congolese authorities and marred by allegations of a fraudulent enrolment process.

Since campaigning officially began on October 28, tensions have been rising, particularly in urban areas, prompting concerns about whether the polls will go smoothly.

“One can wonder if the quality of the elections will be fair, as the enrolment process has been problematic,” Chimere Munguakonkwa, professor of political science at the University of Goma, said.

There are already reports that anti-government forces have burnt voting cards in several constituencies to prevent people going to the polls.

The Independent National Electoral Commission, CENI, says the elections will be held on schedule and “in good conditions”.

“We are in control. We are not siding with a candidate or [any] political party,” said Sirire Mihona, spokesperson for CENI in Goma.

A recent survey carried out by the local non-government organisation Heal Africa across North Kivu, shows local opinion oscillating between disappointment with the region’s leaders and hope that these elections will bring the stability and development people long for.

DRC residents want to see their country get back on its feet after a decade-long civil war that killed an estimated five million people in eastern areas.

“The population of North Kivu wants concrete, visible and material results,” states the Heal Africa survey. “For them, peace remains urgent but it is tiresome to live constantly in an environment where even basic infrastructure is non-existent.”

Besides efforts to maintain peace, the survey concludes that basic infrastructure as well as the population’s food, education, and health needs should not be neglected any longer.

The lack of paved roads makes travelling in North Kivu extremely difficult. The 200 kilometre journey from Goma to the Walikale region takes two days by road. Basic goods such as sugar are scarce and prices are double or triple those in Goma, as everything needs to be flown in. Simple diseases become life threatening, as hospitals are difficult to reach.

Nearly 1,200 people in DRC die every day as a result of insecurity, poor health and hunger, according to the Organisation for Economic Co-operation and Development.

Universities and other public buildings like prisons are overcrowded and in a state of disrepair.

Critics say that in areas like health and justice, the government is largely absent and instead outsources the work to local and international NGOs.

“We should be here only to support and complement the actions taken by our government,” said Gautier Muhindo Misonia, coordinator of the Centre for Research on the Environment, Democracy and Human Rights, a local NGO.

“But there is a lack of initiative from the government. The infrastructure and basic means are not there, and there is no long term effort from the authorities. It means that we often have to start things all over again, because the little we did was undone through a lack of sustainability.”

The incumbent government accepts that there is plenty more work to do, but says it has been working hard over the last five years to develop North Kivu.

Many who voted in 2006 have become disillusioned with their elected representatives.

They accuse members of parliament from both the opposition and the majority of leaving for Kinshasa and never returning to their constituencies or fulfilling their campaign promises.

Some voters say they have learnt the lessons for next week’s poll.

“We had no idea how to decide who to vote for during the 2006 elections,” said one employee of a local NGO in Goma. “This time we know better. I won’t vote for someone because I was given a t-shirt, I want someone who will build the road, not just talk about it.”

However, even if voters select candidates more carefully than in 2006, there are no outright favourites.

Kabila and his party, the People's Party for Reconstruction and Democracy, PPRD, which won by a large majority in 2006, is by no means certain to be re-elected in North Kivu.

Many here say they will vote for Vital Kamerhe of the Union for the Congolese Nation, UNC.

But others want stability above all, which means Kabila.

Etienne Tshisekedi of the Union for Democracy and Social Progress, UDPS, rarely gets a mention.

Tensions between the candidates have risen over recent months, reaching a climax in early November when Tshisekedi made inflammatory statements claiming that he was the de facto president.

Kabila has stated that he will accept defeat if he loses, although he quickly added that there was no doubt he would win.

“Divided or not, the opposition will be beaten,” he said.

As 32 million Congolese go the polls to decide the next step for their country, it is unclear what the outcome will be. However some voters remain optimistic about the democratic process, certainly for the long term.

“One day, this will be normal for us,” said one determined Goma student. “I know I will go cast my ballot again in 2016. I believe we can do it.”

Amid the tensions and uncertainty Munguakonkwa of Goma University said there was still hope of a peaceful outcome.

“If the CENI is not ill-intentioned and plays its role, I think that these elections will not bring us the catastrophe that everyone fears,” he said.