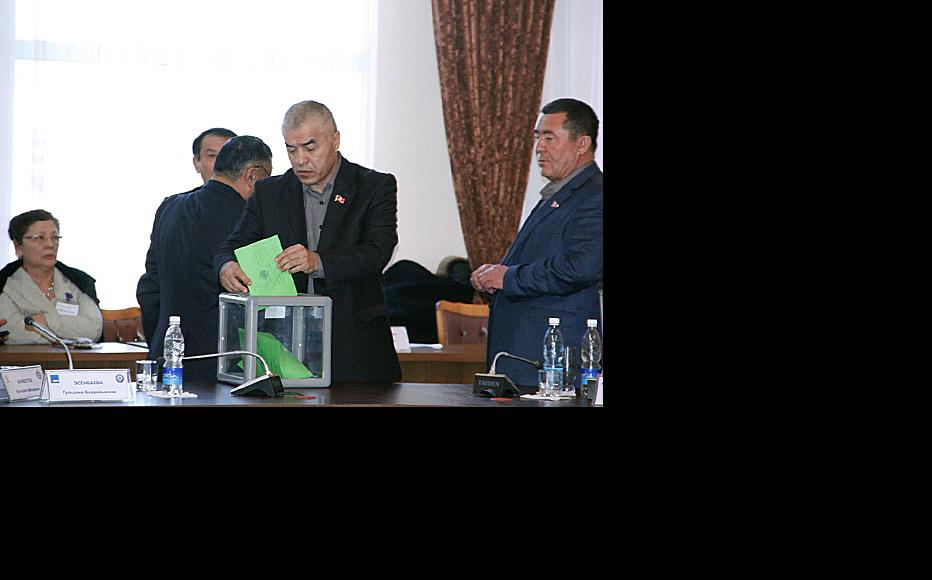 City councillors in Osh voting for their mayor, January 15, 2012. (Photo: Kloop.kg)
The link has been copied

The victory of two politicians backed by the ruling Social Democrats in Kyrgyzstan’s mayoral elections has allowed central government both to strengthen its own position and to remove a powerful opponent in the south.

On January 20, the Kyrgyz election authorities confirmed that Kubanychbek Kulmatov had won in the capital Bishkek and Aitmamat Kadyrbaev in Osh, the biggest city in southern Kyrgyzstan. Mayoral elections were held in these two key cities on January 15, in both case by an indirect ballot, a vote in the 45-member municipal assemblies.

In assessing the government’s double win, two things need closer inspection – how sustainable are these gains, and what do these elections say about the current balance of power in the country?

The obvious winner was the Social Democratic Party, the main force in the ruling coalition and closely linked to President Almazbek Atambaev. The party is gearing up for a parliamentary election in 2015, and beyond that the presidential ballot in four years’ time.

From one perspective, the election of Kadyrbaev in Osh can be seen as a victory for central government over the ex-mayor, Melis Myrzakmatov, a controversial but charismatic figure who had resisted past attempts to unseat him. Although he was finally removed in early December, many expected him to be re-elected because of his strong support on the city council. (See Sacked Mayor Down But Not Out.)

In the event, Myrzakmatov lost because he secured only 19 of the 45 council votes, against Kadyrbaev’s 25. The reverse reflected a shift in allegiances. Myrzakmatov’s Uluttar Birimdigi previously dominated the assembly with 21 seats and support from two more members, one from the National Democratic Party and the other a renegade from the Zamandash party, which otherwise backed the Social Democrats. At the end of December, Zamandash kicked out that member and replaced him with someone else, who followed the party line and did not vote for Myrzakmatov.

Worse still, the numbers indicate that Myrzakmatov lost two votes from his own party. One of those was council chairman Taalaybek Sabirov, who was shunted off upstairs to a post as deputy head of government agency responsible for architecture, construction and housing. This led Myrzakmatov to grumble about “treachery”.

In Bishkek, the election was more straightforward – Kulmatov was the only candidate, and took 41 of the 45 votes. Nevertheless, the Social Democrats kept a careful eye on the process. The Zamandash party initially raised concerns about the Social Democrats’ decision to field one sole candidate without consulting other coalition members, but in the end it went along with it.

As well as a sign that central authority is extending its grip, the mayoral elections can also be read as a sign that President Atambayev and his inner circle are consolidating power around themselves. The current prime minister, Jantoro Satybaldiev, is seen as close to Atambaev, while parliament is not only divided but in a constant state flux as alliances come and go.

There is little doubt that Myrzakmatov’s defiance of government perpetuated the traditional north-south divide in Kyrgyzstan and at times came close to threatening stability. His election defeat clearly changes that dynamic. But isolating Myrzakmatov entirely might not be so productive.

It is certainly too early to write him off. He has been astute enough to shun street protests – formerly a favoured tactic of government opponents. On election day, several thousand of his supporters gathered in the centre of Osh calling for the results to be annulled. They attempted to take over the regional government building and threw stones at police, but calmed down after Myrzakmatov asked them to disperse and avoid doing anything illegal.

The authorities would now do well to be careful not to make Myrzakmatov feel that his stated commitment to working within the political system is in fact pointless. It would be dangerous to deprive him of political options and push him towards the more radical parts of the opposition that would like to see regime change.

Nor is it clear how long the Atambaev administration can count on the loyalty of his successor. Like Myrzakmatov, Kadyrbaev hails from the same southern constituency, and he has a track-record of joining popular “anti-centre” protests. In 2010, he led a group of demonstrators who occupied government buildings in Osh in protest at an attempt to sack the provincial governor.