Does Armenia Need a Truth Commission?

Does Armenia Need a Truth Commission? 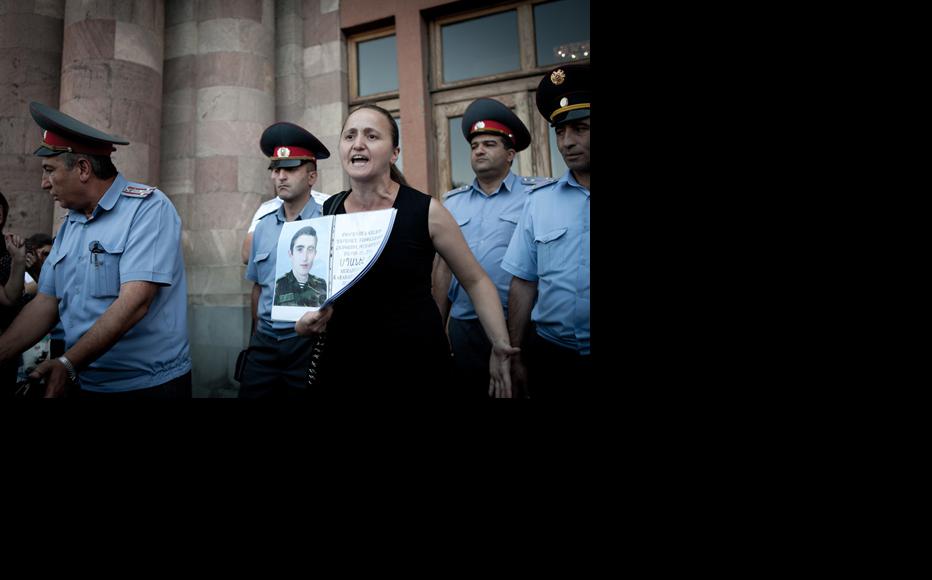 Bereaved mother Nana Muradyan campaigns for justice for her son. (Photo courtesy of N. Muradyan)
The link has been copied

A proposed transitional justice strategy to review human rights violations in Armenia since the collapse of the Soviet Union has received a mixed reception.

The plan, part of a four-year judicial reform strategy developed by the ministry of justice late last year, has now been released for public discussion.

According to the document, a special fact-finding commission, similar to the truth and reconciliation commissions created in many countries after major political crises, will be formed in Armenia to restore citizens’ “systematically violated rights”.

The commission will gather information about human rights violations that occurred after 1991 – when Armenia gained independence - until 2018, when public protests led to the resignation of President Serzh Sargsyan.

The Centre for the Development of Legislation and Legal Research at the ministry of justice prepared the judicial reform strategy, within the framework of which transitional justice mechanisms will be introduced, including the fact-finding commission.

Its director Tigran Dadunts said that the commission would focus on election violations and political persecutions since 1991 as well as illegal property confiscations and the deaths of military personnel in non-combat circumstances. No specific events or issues have been identified.

The commission will have a two-year mandate and consist of up to 20 members representing various fields of society.

“The commission is an out-of-court structure, completely apolitical, autonomous,” Dadunts explained. “It will not make any decisions. It will only study the facts. The decision, based on these findings will be made by the competent state bodies - the government and parliament. In this regard, the members of the commission must be apolitical and not affiliated with any political party.”

When it concludes its investigations, the commission will issue a report with recommendations on restoring violated human rights.

“The task of the commission is to learn what exactly happened in the past and present the objective picture and most importantly, provide recommendations on how to restore violated human rights and how to prevent possible violations in the future,” Dadunts concluded.

While some human rights groups see this potential commission as a positive move, others – including those now in the opposition – see this as a politicised move.  And some of those who believe their rights have been violated in the past have little faith this commission will provide them with justice.

Nana Muradyan’s son, Valery Muradyan, died on March 15, 2010 at the Aikaz military unit in Nagorno-Karabakh. According to an official investigation he committed suicide, but his mother believes that her son was strangled and then hanged.

As a mother of a soldier who died in a non-combat situation, she is sceptical about how effectively the commission will work to restore justice.

“In the ten years since, the investigation did only one thing - it covered up the murder and brought the case to a deadlock,” she said. “Even after the "velvet revolution" there has been no progress in the case. I hardly believe that this commission will change anything until truly systemic changes take place. The investigators and prosecutors who hid the truth as well as their superiors all remain in their positions. So how can they uncover a crime that they themselves concealed?” Muradyan asked.

Arpine Hovhannisyan, a former minister of justice and now an opposition politician, said that the authorities were too focused on digging into the past instead of looking to the future.

“They will be investigating the last two years, focus all public attention on this, and not on what needs to be done for the development of the country,” she said. “In support of the proposed document on establishing the fact-finding commission in Armenia, they provided the example of Argentina, where a military junta ruled and people were drowned in the sea.

“They talked about the example of Peru, which went through a civil war and lost 70,000 lives in it. They also refer to South Africa, where apartheid governed. And, here comes a question - is the situation in Armenia similar enough to these examples that they want to create a fact-finding commission?” Hovhannisyan asked.

However, those now in government claim that there had been a huge amount of political persecutions and rights violations in Armenia’s past.

“In this regard, finding the truth and restoring justice is very important,” said Maria Karapetyan, a lawmaker from the ruling My Step faction.

“I assume that as a result of the Commission’s work, a multi-volume archive and a large amount of video materials will be compiled, based on which the Commission will be able to write a ten to 15-page report with recommendations, which we will adopt during a parliamentary meeting,” Karapetyan added.

Hovhannisyan questioned how the mechanisms for implementing justice would work.

Karapetyan said that this kind of scenario would not be in the commission’s remit.

“Based on the results of its work, the commission may recommend various ways to restore the violated rights of citizens, whether that be compensation, rehabilitation or any other means of assistance,” she said. “This might even be a reinstatement of employment, if possible.”

Giving Voice, Driving Change - from the Borderland to the Steppes
Armenia
Rule of Law, Human rights, Reconciliation
Connect with us