As thousands of refugees arrive, opinion is split over the war unfolding next door.

As thousands of refugees arrive, opinion is split over the war unfolding next door. 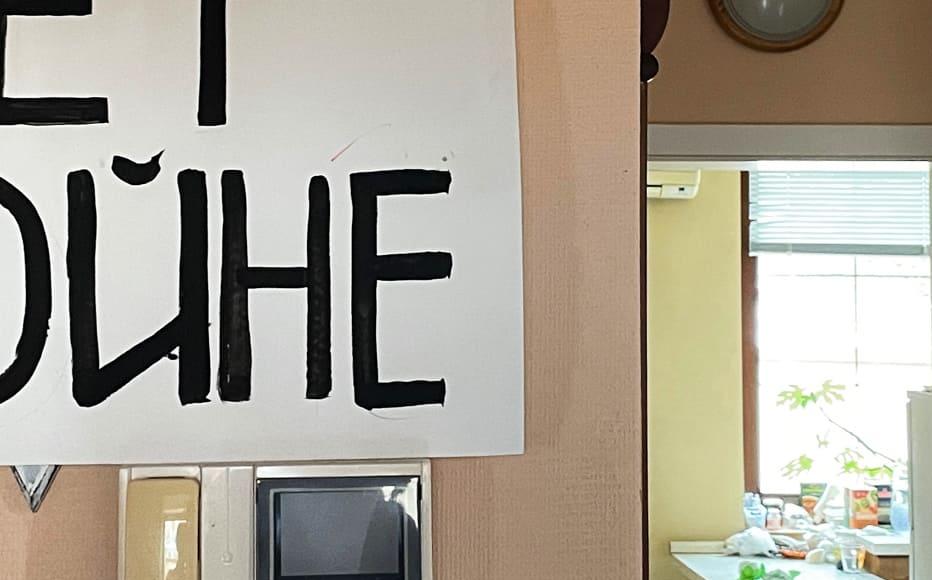 A sign says No War in a Tiraspol apartment hosting refugees from Ukraine. Authorities have allocated temporary housing for Ukrainians crossing into Transnistria, with many residents making their homes available. © Alexander Udodov
The link has been copied

On February 24, the day the Russian invasion of Ukraine began, a story about football led the news in the breakaway republic of Transnistria, rather than the conflict in its neighbouring country.

The match between local heroes Sherif Tiraspol and Portugal’s Braga Sporting in the Europa League grabbed the headlines, while the announcement that Russia’ had launched “a special military operation in Donbas” was a brief item in the region’s Novosti Pridnestrovya news agency.

As Transnistria’s residents come together to welcome Ukrainians fleeing the fighting, the de facto authorities in the strip of land bordering Ukraine on the left bank of the Dniester River are trying to maintain a neutral stance over the war.

There are up to 2,000 Russian troops in the region and ties with Moscow are close, although Ukraine is also a major trading partner. The local media has avoided reporting on the hostilities and officials use neutral definitions such as “situation” and “events” rather than directly address the invasion.

Transnistria’s leader Vadim Krasnoselsky issued a statement, noting that authorities would “ensure the stability and security of citizens” and advising them “to remain calm and use exclusively verified information from official sources”.

He also signed a decree to help provide refugees with aid and housing and established an ad hoc task force “to assist foreign citizens who are forced to temporarily stay on the territory of Transnistria”.

Meanwhile, Tiraspol stated that about 6,000 Ukrainians had arrived in the region.

“The authorities have made careful framework statements with an emphasis on good relations between neighbours and helping Ukrainian refugees,” said Nata Skurtul, a Tiraspol media expert. “[They] indicate that the elite is afraid to make a wrong move by voicing something that will lead to negative consequences or an unpredictable reaction from their neighbours.”

Transnistria borders Ukraine for just over 450 kilometres and Ukrainians make up about one fifth of the region’s population of around 473,000. On February 28, Ukraine shut its side of the Kuchurgan-Pervomaisk border crossings with Transnistria.

“On February 24, I was woken up by explosions,” Ksenia, a 24-year-old make-up artist from Odesa, told IWPR. “A factory was blown up somewhere nearby… It was terrifying. I took a taxi to the border.

“At that point, everyone could cross the border. I left on the very first day,” she continued. “As I entered, Transnistrian border guards asked me what happened, because, as they said, they had no idea what was going on.”

Refugees have been provided with temporary housing, food and clothing, with many hosted by local families and children enrolled in schools and day care centres. The incomers have also been tested for Covid-19 and can get vaccinated against the virus.

“It is 12 kilometres from [our] village of Mayak to Palanca [the border crossing], we walked for three hours, with bags, backpacks and a child,” said Alena, 34, who works in a bank in Odessa. “My mother, my friends and relatives told me not to go to Transnistria. They said, ‘are you out of your mind? We have relatives near Chisinau, go there, they will host you.’ But it is quiet and peaceful here. I know I am safe, but I am still worried.”

She arrived with her teenage son and her friend Olga, whose relatives in Tiraspol are hosting them.

“I trust Transnistria, I have been here. I have relatives here. It feels like home… [But] of course, we want to go home. We hope to go back soon. Everything [we have] is there,” Olga, 33, explained. “Ukraine was attacked from Belarus, from the Crimea, from the sea. My friends were against moving here. There was a fear that the Russian army would attack from [here], that Ukraine would respond, and Transnistria would suffer.”

Both the de facto authorities in Tiraspol and the Moldovan ministry of defence denied reports in the Ukrainian media of shelling from Transnistrian territory.

Grassroots volunteer initiatives, like the youth group By Your Side, which was set up at the height of the pandemic, have re-directed their work into collecting, sorting and donating items to refugees.

“The next issue is employment for those who plan to stay here. Serious and centralised decisions are needed to provide psychological assistance,” Alexander Gonchar, the director of the Rezonans Centre, one of the region’s largest NGOs, told IWPR. “We also must not ignore the potential domestic conflicts based on different political views, the financial [consequences] for the region and the increased risks of sexual violence as most refugees are women and children.”

“I think that this is a forced measure and Russia is not to blame for this,” Yevgeny, a 40-year-old entrepreneur, told IWPR.

Referring to Stepan Bandera, a controversial politician seen by some as a symbol of Ukrainian struggle against the Soviet Union and by others as a far-right theorist,” he added, “The country [Ukraine] has been pumped up with anti-Russian, nationalist, Bandera ideology for the past 30 years. It led to bloodshed in Donbas… about 15,000 people died. Russia was forced to send troops to stop the mess made by the military junta. Russia was forced to do it.”

The UN estimates that the war in eastern Ukraine claimed about 13,300 lives, including at least 3,375 civilians, around 4,150 Ukrainian military and approximately 5,700 members of armed groups. Two-thirds of all deaths happened between 2014 and 2016.

On March 6, about 100 people gathered in Tiraspol in support of Russia, despite calls from the authorities to avoid rallies. Attendees were mostly elderly and supporters of the fringe Transnistrian Communist Party.

Earlier, on February 28, a few people had gathered for a more general protest with posters reading No To War and I Am for Peace.

One demonstrator, 22 year-old Katerina, said that she had come out “to somehow support Ukrainians”.

“It is not just a ‘situation’ or a ‘special operation’, it is war,” added Anna, a 31-year-old photographer. “Of course, there is propaganda in any country, but for me it is enough just to open my eyes to distinguish black from white and understand who is now committing crimes against humanity.”

Alexander, 24, said that he did not know the details of the conflict, but nonetheless was opposed to war.

“I am a pacifist,” he said, adding. “We have achieved so much as a human race ... And now, this. Lord, people, haven’t we already experienced this? Isn’t it enough?”