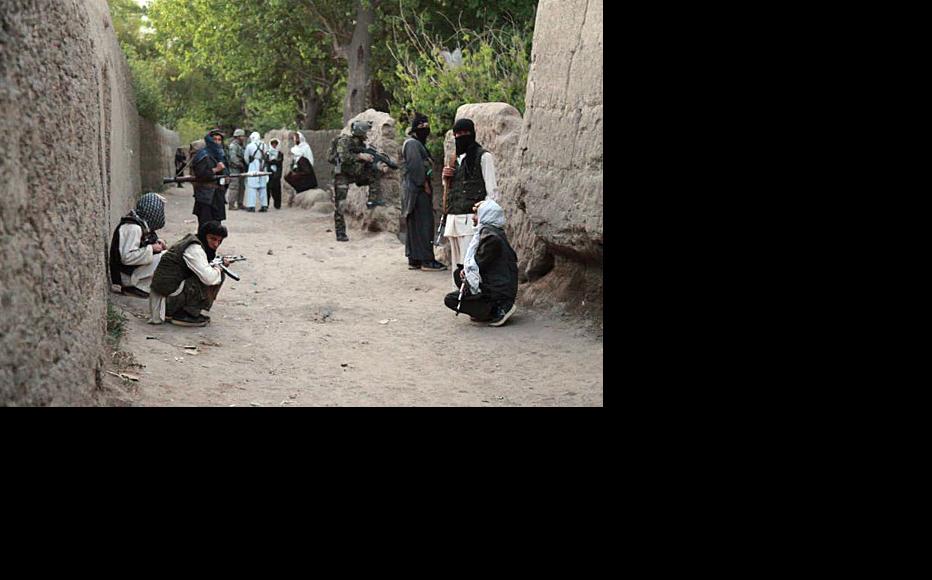 International troops patrol with armed Afghans who are part of a road maintenance team in Tagab district, Kapisa province, in March 2010. (Photo: Staff Sergeant Horace Murray/US Army)
The link has been copied

In a rare show of popular resistance against the Taleban, residents of the Nejrab district of Afghanistan’s Kapisa province have driven the insurgents out of their area after growing tired of them interfering in reconstruction work.

Much of Kapisa, in northeastern Afghanistan, has come under the sway of the Taleban, who enforce their own laws and often prevent aid projects from taking place.

What finally tipped the balance in Nejrab, according to tribal elder Torkhan, 53, was the Taleban’s kidnapping of two engineers from the Khosti construction company who were working on a road-building project.

Tribal elders and the company’s security department sent a message to the Taleban, warning them that there would be serious repercussions if they harmed the engineers.

“As a result of the warning, the Taleban did not kill the engineers, but they did ask for money for their release,” Torkhan said.

He said that after local people contacted the Afghan authorities, “we got weapons and started fighting against them [Taleban], and we released the engineers”.

He added that a Taleban commander who was unhappy about the insurgents’ activities in the area teamed up with local people in the offensive against his former colleagues.

“Many Taleban came from other districts to support the ones in Nejrab district, but it was to no avail. In the end, they were forced to leave Nejrab,” Torkhan said.

The Khosti construction company’s security chief, Abdol Jabar, said both sides suffered casualties in fighting on August 28, after which the insurgents fled.

With the area now safe and construction workers confident that they enjoyed local support, building work could continue, he said.

“This incident, following the abduction of our engineers, shows that people are very interested in the reconstruction of their country,” he said. “It’s a great lesson – we should always rely on our people.”

The local government chief for Nejrab district, Soltan Mohammad Sapai, said he was delighted with the response.

“The people’s reaction against the Taleban showed that they love their country and want to see it rebuilt,” he said. “They have decided to take a stand against anyone who prevents reconstruction work, and that’s a fine example of their support for the government.”

A Taleban official who preferred to remain anonymous told IWPR that the insurgents’ general aim was to prevent the construction of roads which American forces would used to conduct patrols and counter-insurgency operations.

On the Nejrab incident, he said, “We abandoned the area in order to avoid civilian casualties. Our plan is to get local people to understand this so that God willing, we take control of the area in the near future.”

The security chief for Nejrab district, Abdol Ghafar Haidari, insisted this would not happen, and public hostility to the Taleban would continue.

“We are sure the Taleban don’t have the capacity to conduct further operations and enter the area,” he said. “Our headquarters has the capability to prevent Taleban operations. If something like that does happen, the coalition forces and national army will support us. We will ask them for help if necessary.”

Torkhan said that although warnings had been received of an imminent Taleban attack on Nejrab district, local people were undeterred.

“Our weapons have bullets as well – they aren’t just sticks,” he said.

Locals say they faced increasing trouble after the Taleban were joined by outsiders who they believe were Arabs, Pakistanis, Uzbeks and Chechens.

“At the beginning, they were Afghan Taleban who treated us decently modesty. They wouldn’t move against reconstruction activities,” tribal elder Shah Agha, 65, said, visibly angry as he stood surrounded by a group of armed young men and berated the militants.

“Later on, when foreign Taleban came, they used to beat up government and aid organisation employees, and they even killed some people they accused of spying. With the foreign Taleban there, our local Taleban also became cruel. They started acting against the people in ways that they hadn’t done previously – for instance, they’d make people bring them food or wash their clothes.”

Angrily throwing his turban on the ground, Shah Agha continued, “The neighbouring countries don’t want our country to be reconstructed. Aren’t we human beings? Don’t we need or deserve roads, clinics, schools, hospitals, doctors, engineers and a developed, modern life? How long must we continue carrying patients to the main road on a bed carried by ten men for hours?”

Political expert Ahmad Sayedi says the Afghan government should take note from this case, and take steps to improve its own standing, since insurgents are never successful if the regime they are fighting is popular.

Afghans largely welcomed the overthrow of the Taleban regime in 2001, but there has been widespread disappointment in the progress made since then.

Many complain of the power still held by former warlords and lament ongoing, massive corruption. Rising civilian casualties – often blamed on the international troops in Afghanistan – have further driven a wedge between the public and the political establishment.

Sayedi argues that the size of this divide will determine the Taleban’s future success.

Although it is not yet clear whether the Taleban will attempt to return to Nejrab, residents say they are happy to be rid of them.

Pachghan resident Ahmad Shah, 22, says he is enjoying a sense of new-found freedom.

“We didn’t used to go to the bazaar because we were afraid of the Taleban - if they caught us, they’d kill us,” he said. “Now, I can go quite fearlessly to the district centre and the bazaar during the day and even at night.”

Mohammad Fahim is an IWPR-trained journalist.