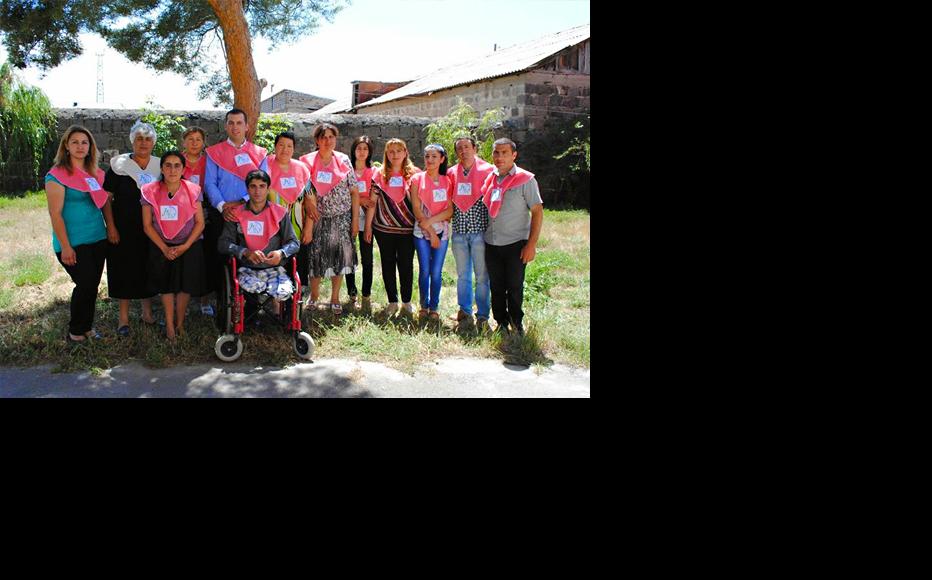 Staff at the Ighdz social enterprise. (Photo: Arpi Harutyunyan)
The link has been copied

Naira Abgaryan, 50, used to work in a confectionary shop. She was summarily dismissed after her employer found out that she had hearing problems.

“I worked there for over a year,” said Abgaryan, who is her family’s sole breadwinner. “No knew about it and it didn’t interfere with my work. I was also embarrassed about telling people. But one of my colleagues noticed and reported it to the director, who decided to dismiss me,” she told IWPR.

Despite efforts by both the Armenian government and international organisations to improve the conditions and rights of people with disabilities, social attitudes remain a major obstacle to employment access.

Susanna Harutyunyan runs Ighdz, a social enterprise for people with disabilities in the town of Martuni.

“It’s very painful to say it, but people in our province [Gegharkunik] don’t understand that people with disabilities can make good employees and produce quality items,” she told IWPR. “Once people know that a product is made by disabled people, they won’t buy it.”

Ighdz makes clothes and does colour printing, and employs ten people with disabilities, all of whom have had extensive training. It was set up last year by the Women’s Community Council of Martuni as part of a Save the Children project funded by the United States aid agency USAID.

It is finding it hard to make headway. Anahit Gevorgyan, head of the Martuni women’s council, told the Media Centre in May that the enterprise had few orders coming in, and distributors were forced to disguise the origin of their goods.

Lisa Ghiasyan, Senior Specialist at the Employment Agency, Ministry of Labor and Social Issues, told the Media Centre that Armenia had no separate law on social entrepreneurship. There were some employment programmes run by the state for people with disabilities, but this was only on an ad hoc basis.

According to official data, there are about 197,000 registered disabled in Armenia, of whom 110,000 are of working age. However, only between eight and nine per cent of that latter number are in employment.

People with disabilities face a lot of prejudice from potential employers. According to research done by the Save the Children, the main challenges that disabled people face if they get into employment stem from the lack of workplace accessibility and specially adapted vehicles.

“In the capital Yerevan, I don’t think there’s a social problem of discriminatory attitudes. The problem is providing jobs for people with disabilities,” Zaruhi Batoyan, editor of the Disabilityinfo.am website, told IWPR. “Employers simply refuse to take them on.”

The government is trying to modernise attitudes to disability, both societal and legislative. Reforms announced two years ago are now being rolled out. (See Armenia Reforms Disability Rules on the plans announced in 2013). Experts say that some progress has been made as a result of the reforms being rolled out. More parts of the country are shifting the emphasis away from special schooling to inclusive education, and employment is rising among people with disabilities. Under new rules issued this year, public-sector institutions with more than 100 employees must ensure that at least three per cent of their staff are people with disabilities. This requirement will be extended to the private sector next year.

Batoyan, who uses a wheelchair, runs a successful business, the Zartprint printing house, as well as the disability information site. Half the people employed at Zartprint, another venture set up with support from Save the Children, have disabilities.

Batoyan is critical of some of the government’s reforms, arguing that they are of “questionable effectiveness”.

“For example, the state employment programme stipulates that transport costs must be reimbursed… for carers who accompany people with disabilities to work, if the distance is under ten kilometres,” she said. But that rules out anyone who lives further away, or who moves away during his or her period of employment.

Another provision means that people with disabilities are exempt from having to go through the normal probationary period of employment. Batoyan argues that this might be counterproductive and deter potential employers.

“It can be seen as positive discrimination that ends up having the reverse effect. What employer is going to agree to hire people without first assessing their skills?” she asked.

Batoyan argues that what people with disabilities need is not to be treated differently, but to be factored into government policymaking.

“In reality, we don’t need to draft separate programmes specifically for people with disabilities, but to take the problems they face into account when education and employment programmes are being planned,” she said.

Arpi Harutyunyan is a freelance journalist in Armenia.