Tashkent says it cannot cope with any more than the 80,000 it has already let in.

Tashkent says it cannot cope with any more than the 80,000 it has already let in. 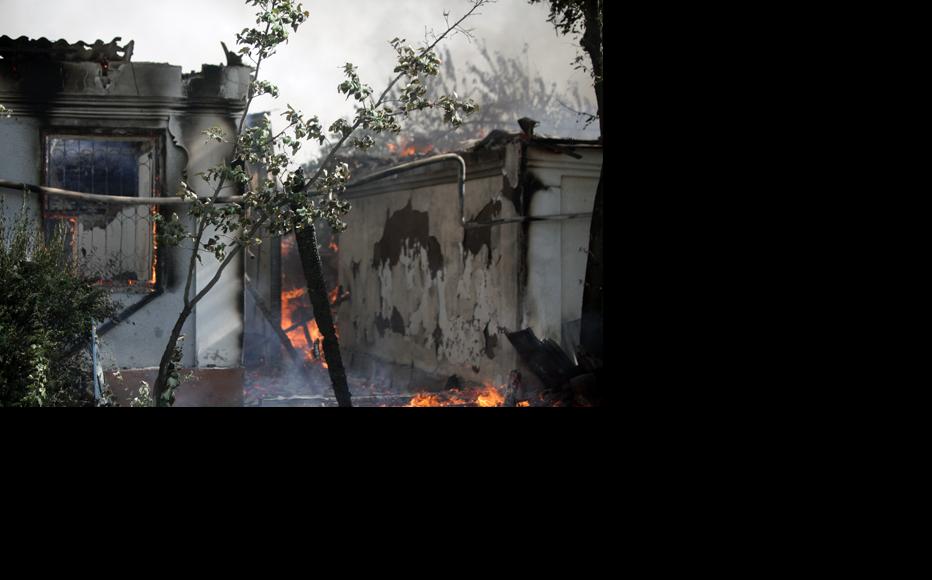 Many refugees have no homes to go back to. (Photo: Inga Sikorskaya)
The link has been copied

The government of Uzbekistan says it has taken in over 80,000 refugees fleeing ethnic clashes in neighbouring Kyrgyzstan, but cannot allow any more into the country for now.

Tens of thousands more are waiting on the Kyrgyz side of the border, most of them ethnic Uzbeks terrified by days of attacks and arson.

As of June 16, the Kyrgyz health ministry said 187 people died and over 1,900 required medical treatment following fighting between Kyrgyz and Uzbeks, which began in Osh overnight on June 10-11 and spread to the neighbouring Jalalabad region.

Uzbek officials says the hastily-established refugee camps are already overcrowded. They say they have given sanctuary to 83,000 people as of June 15, according to the Uzbek ministry for emergency situations, quoted by the Russian news agency RIA-Novosti.

Speaking the day before, Deputy Prime Minister Abdullo Oripov said the exodus from Kyrgyzstan had to stop.

"Today we are ceasing to accept refugees from the Kyrgyz side because we have nowhere to accommodate them and we are unable to cope with them on our own," Oripov said on a visit to the border.

He said the Uzbek authorities had set up 30 camps with its own resources, but needed international humanitarian aid to help deal with the refugee crisis.

"If we have the capacity to help them and provide treatment for them, then of course we will open the border," he added.

IWPR has learned that police in Andijan region detained a group of people who had crossed without permission, and placed them in custody in Jalakuduk.

A spokesman for the United Nations refugee agency UNHCR in Kyrgyzstan, Andrej Mahecic, said 275,000 people had been displaced. Speaking on June 15, Mahecic said the overall number included 75,000 who were now refugees in Uzbekistan.

Representatives of the International Committee of the Red Cross gave a slightly higher figure of 80,000 for the people now inside Uzbekistan.

Ibrohim, a resident of Andijan in eastern Uzbekistan, came to a nearby border checkpoint to pick up relatives from Kyrgyzstan who had managed to cross over.

He confirmed accounts given by other refugees that even before the border was closed, the Uzbek authorities were reluctant to let male adults cross the border.

“They look at their [Kyrgyzstan] passports, and if it says they are Uzbek [by ethnicity], then they let them in - mostly women, elderly people and children,” he said.

Ibrohim said security was tight and refugee collection points were being guarded by the police and security service, a marked change from the first couple of days of unrest, when people were able to enter the camps to look for relatives.

He said that in the confusion as people were bused around to different camps, some refugees were losing contact with family members who had fled along with them.

Once housed in camps, schools and other buildings, he said, the refugees were being taken care of and were receiving help from local people as well as from the Uzbek authorities.

“Everything is being organised and prepared for people, and there are cooks to prepare food,” he said. “They are being fed well and given all the basic necessities including baby nappies.”

Local Uzbeks were opening their own homes to provide accommodation, and making up food parcels and getting border guards to deliver them to refugees still stranded on the Kyrgyz side.

Over on the Kyrgyz side of the frontier, an IWPR reporter met up with Murat, a man from Bazar-Korgan interviewed earlier in the week.

He and his family were just about to spend their second night after failing to get over the border into Uzbekistan. With nowhere to sleep, he was able to find refuge in a local mosque.

“This morning we went up to the border again, and soldiers on the Uzbek side were shouting through loudspeakers that they were unable to accept the remaining refugees and they asked us to go home,” he said. “Now they aren’t letting anyone in, but no one here has moved.”

He described conditions for the refugees as difficult.

“Yesterday we were hungry and some local people gave us bread, but it wasn’t enough for everyone, and we ate the little food we had brought with us.”

Analysts say Uzbekistan’s decision to halt the flow of refugees is partly for security reasons, as well as the difficulty of absorbing such large numbers.

Until the refugees started arriving on June 12, the frontier had been closed for two months because the Uzbek authorities were concerned at the popular unrest on April 6-7 which led to the then Kyrgyz president Kurmanbek Bakiev being deposed.

In an official statement on the ethnic clashes on June 12, Tashkent expressed concern that killings, looting and arson attacks were directed specifically against the Uzbek community of southern Kyrgyzstan and urged that country’s authorities to put a stop to the violence.

According to Bishkek-based political analyst Mars Sariev, “Uzbekistan fears that there’s a danger these events will spill over onto its own territory. It’s difficult to control such large numbers of people in the border area. ”

In addition, Sariev said, Uzbekistan was sending a strong message to the Kyrgyz interim government that the crisis was its problem, and “we should sort this mess out ourselves”.

The Kyrgyz authorities have begun efforts to persuade the refugees that it is now safe to return to their homes. Deputy prime minister Almazbek Atambaev has asked them to come back, and Joomart Saparbaev, an aide to deputy prime minister Omurbek Tekebaev, said the authorities were negotiating with leaders of both Uzbek and Kyrgyz communities to facilitate a return.

So far, the refugees still inside Kyrgyzstan remain unconvinced by such assurances, and are staying put just even though conditions are difficult, with no food or accommodation and a widespread fear that they may come under attack, especially under cover of darkness.

Some of those whose homes have been burnt down have nowhere to go back to, anyway.

“Of course we are planning to return to Osh – but where to? Our house has been burnt down,” one refugee, who did not want to give his name, told IWPR. “I hope there will be some kind of temporary accommodation, but who is going to rebuild my house?”

Murat said he too was unconvinced by requests to go home.

As with many other Uzbek families, his father stayed behind in Bazar-Korgon to prevent their home being looted or torched. He said his father called him saying they should not come back for a couple of days at least. Their house, some way far from the central part of the town, was still intact, but those of some near neighbours had been set on fire.