Despite peace agreement and UN backing, many say it is not yet safe to go home.

Despite peace agreement and UN backing, many say it is not yet safe to go home. 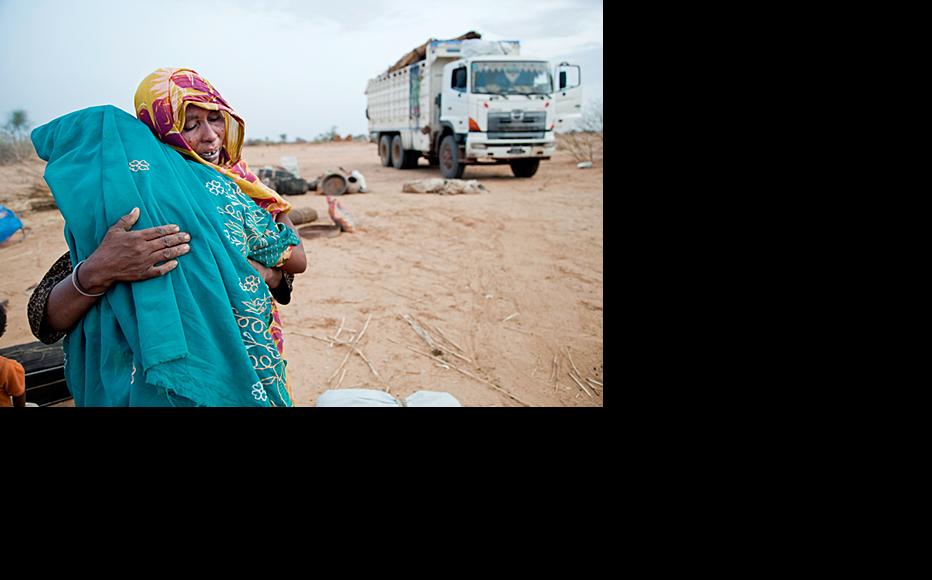 More than 100,000 people uprooted by conflict in the Darfur region of western Sudan have returned home since early 2011 as the conflict there begins to cool, according to United Nations officials. But the vast majority of displaced people remain in camps, and those interviewed by IWPR said they needed full security guarantees before they could return home safely.

Millions of civilians have fled their villages in Darfur since 2003 when fighting between the government and rebel groups began in earnest, and have lived ever since in Sudanese camps for internally displaced persons, IDPS, or in refugee facilities in eastern Chad.

Following a peace accord signed in Doha between Sudanese rebel groups and government last July, and the establishment in February 2012 of a new governing body, the Darfur Regional Authority, DRA, the Sudanese authorities have encouraged IDPs and refugees to go home as the situation appears to be improving.

Around 84,000 refugees and IDPs returned to Darfur in the course of 2011, according to the UN refugee agency UNHCR, while the Geneva-based UN Office for the Coordination of Humanitarian Affairs, OCHA, says the number has since swelled to 109,000.

The UN says people are returning voluntarily, and it is optimistic that many more will follow.

Soldiers with UNAMID, the peacekeeping force in Darfur, “conduct more that 150 patrols per day which has made the region safer for many”, the force said in an email to IWPR. “In 2011 there was a reduction in violence by as much as 70 per cent over the year before.”

However, UNAMID noted that the situation remained unpredictable.

The returns follow an earlier peace agreement between Chad and Sudan that helped secure the West Darfur administrative region from cross-border raiding.

UNHCR has been building pumps, wells and toilets and repairing classrooms in West Darfur to help returnees, while aid groups are also providing seeds, wells and ploughs to help them settle in, Damian Rance, a public information officer with OCHA in Khartoum, said.

But for many displaced persons, the situation outside the camps remains far from stable. In IWPR interviews, several expressed reluctance to return, and questioned whether the government would protect them if they did so.

There are still daily reports of rapes and looting and of militias attacking civilians in the North and Central Darfur regions, according to Radio Dabanga, an independent station, while government forces reportedly shelled rebels in North Darfur earlier in March.

And as recently as October, 70,000 more people – mostly women and children – fled during attacks in North and South Darfur, according to UNHCR.

An IDP at the Riyadh camp near El Geneina, the capital of West Darfur state, said the area remained highly dangerous.

“The situation hasn’t changed; women outside the camps are still being raped… security is badly needed,” the IDP said. “We’ve been stuck in these camps for nine years…We are ready to leave the camp if there is security. We need to feel that one can walk 20 to 50 kilometers in remote areas without threat.”

The IDP said at least three conditions should be met before large numbers of people considered returning, the IDP said.

“First we want disarmament [of armed groups] and would like to see widespread arms stocks taken away,” the IDP said. “Secondly, we want the settlers who were brought onto our lands to be removed and the reconstruction of villages with schools and hospitals. Thirdly we want compensation for our relatives who have been killed.”

A refugee at the Farchana camp across the border in Chad echoed this view, saying compensation and the disarming of pro-government “janjaweed” militias were critical.

“We consider these steps an indicator of good will and [they] will make us believe in peace,” he said.

The janjaweed are ethnic Arab paramilitaries who assisted the Sudanese military in fighting rebel groups in Darfur, and are accused of carrying out numerous atrocities against civilians.

The Sudanese government and the Liberation and Justice Movement, an alliance of ten small rebel groups, signed the Doha peace agreement under UN auspices in July 2011. As part of the deal, Khartoum promised to establish the right security, political, economic and social conditions in order for people to return “voluntarily, in safety and dignity”.

Access to food, water and healthcare are also supposed to be guaranteed for returning civilians, along with the recovery of the properties from which they fled. Sudan has said that each returning family will receive 250 US dollars, although this meant is to cover their immediate needs rather than compensate them for losses.

Since January, UNAMID has been running workshops to explain the agreement and the possibility of return, the force said in an email. Some 4,000 people across Darfur have attended 40 workshops. UNAMID did not respond to IWPR’s questions about how IDPs have responded.

According to Radio Dabanga, the UN’s proposals have not always gone down well. Following a January workshop, the leaders of the Rwanda, Dali and Tebra camps in North Darfur rejected an offer of voluntary return and put their security concerns in writing to the head of UNAMID, Ibrahim Gambari, the station reported.

Other IDPs told IWPR they remained confused about the agreement and its implications.

“We don’t know a lot about politics and issues arising from the agreement, but we want security and freedom of movement,” said the IDP in the Riyadh camp, adding that Darfur was not at peace.

Another IDP in the Abu Shouk camp in North Darfur also expressed concern, saying, “If the Doha agreement is implemented, it may provide security… but if the current situation remains unchanged, this agreement will fail like the Abuja agreement.”

The Abuja agreement was reached in May 2006 between the rebel Sudan Liberation Movement and Khartoum, but it did not bring peace because the other main rebel groups did not sign up to it.

In the refugee camps in Chad, interviewees told IWPR they were similarly pessimism about the Doha agreement, partly because key rebel groups boycotted these talks, too.

“The Doha agreement will not bring us peace because it is a partial deal,” said the refugee in Farchana camp.

“Every day, we witness events [that] show that the security situation is still bad…. Signatories of Doha cannot achieve peace as [long] as the fighting continues between the government and other armed movements.”

HOW MANY DARFURIS STILL TO RETURN?

According to one commonly-cited figure, there are more than two million IDPs and registered and unregistered refugees, but the exact number is unclear.

Many of those who fled left their homes years ago, but others were displaced more recently, and some have been forced to flee a second or third time, further complicating the picture.

Omar Ismail, a policy analyst at the Enough Project NGO, which campaigns, on Darfur, cautioned that the figures “can be easily messed up”.

IDPs say numbers in the camp often fluctuate, with people leaving to farm outside, and then returning after the rainy season.

Returns are not always permanent, and some IDPs have returned to their villages only to be displaced again, said Abdelbagi Jibril, founder of the Darfur Relief and Documentation Centre.

Top-level officials have been pushing for returns. Tijani Sissi, leader of the Liberation and Justice Movement and now head of the DRA established by the Sudanese government, told a press conference that wider problems facing the region could not be addressed unless the problem of the camps was solved.

Sudanese president Omar al-Bashir has called for IDPs and refugees to return home, though it is unclear how persuasive he will be.

The International Criminal Court in The Hague has indicted Bashir in relation to the atrocities in Darfur; he is accused of genocide and seven counts of war crimes and crimes against humanity.

Bashir denies the allegations and says he does not recognise the ICC.

Many IDPs distrust the Sudanese government because they see it as a direct party to the conflict. Jibril said that ultimately, people needed to hear from a neutral authority that Khartoum was serious about ensuring their safe return.

“Returning home is the dream of everyone in Darfur, inside and out,” he added.

Mohamed Abdel Rahman Modalal, a government advisor in South Darfur, said refugees would only be helped to return once security was guaranteed, and promised that there would be no coercion.

“We won’t force anybody to return” he said. “People will be able to make the choice.”

The government is offering to rebuild major villages destroyed in the conflict, and to provide education, health, security and water, he added. “When these services are complete, then we [will provide opportunities] for everyone from the smaller villages nearby to come and live.”

Officials also plan to offer all the residents of large camps that have sprung up around towns and cities like Nyala, El Fasher, and El Daein pieces of land “that they can own and live on with their full rights secured,” he said.

Humanitarian aid sources in Khartoum said this may be unrealistic. If groups of IDPs are to stay permanently around these urban centres, they will need farmland, and the current owners will require compensation, they said.

“Nobody has addressed the issue of land titles,” one source said on condition of anonymity.

Ismail said some cities would be unable to support large new settlements around them on a permanent basis. He recalled that when he grew up in El Fasher, the capital of North Darfur, it had no more than 40,000 residents. But with the surrounding camps, the overall population had hit over a million.

“There’s a lack of infrastructure… successive governments have not invested in Darfur,” he said, adding that basic problems like sewage provision made the situation untenable.

Jibril agrees that the returns may look easier on paper than they are.“The government cannot return [the refugees] by slogans alone,” he said.

A new strategy is needed to build refugees’ confidence in the government, and it will have to go beyond cash handouts and instead address the deep-seated need for justice, he said, adding that this would have to include “real steps to compensate for the loss… and to prosecute those who transgressed”.

Janet H. Anderson is an IWPR trainer based in the Hague. Tajeldin Abdallah Adam and Zakia Yusuf are IWPR contributors.