Nearly everyone is part of the communal surveillance network, but members admit that people don’t turn up for events any more.

Nearly everyone is part of the communal surveillance network, but members admit that people don’t turn up for events any more. 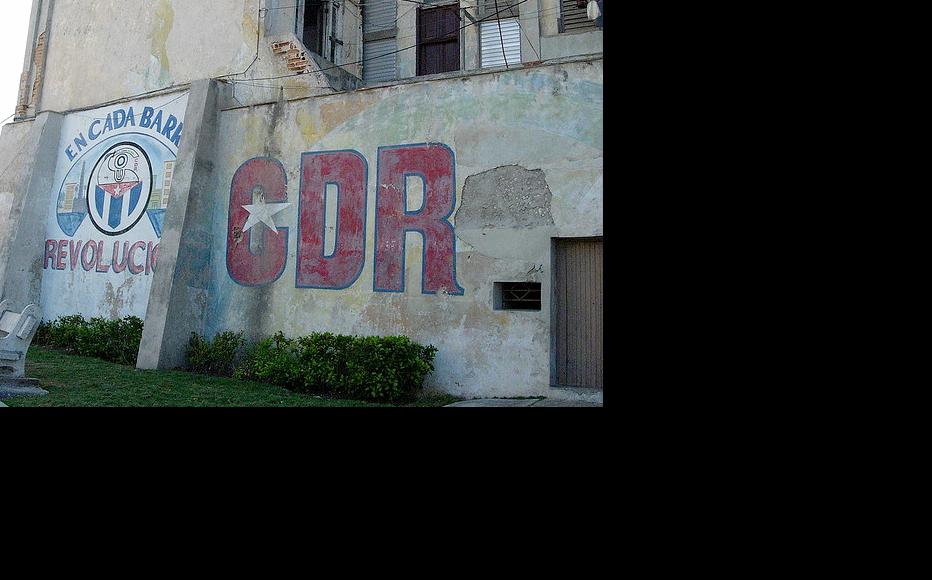 A CDR (Committee for the Defence of the Revolution) logo on an apartment building. (Photo: Abraham Orozco/Flickr)
The link has been copied

As Cuba’s system of neighbourhood committees celebrated its 52nd birthday, observers said public participation in it was dwindling.

Annual celebrations of the anniversary of the nationwide Committees for the Defence of the Revolution, CDR, took place in Cienfuegos province in late September, for the fourth year running.

The CDR system was set up in 1960, a year after the Cuban revolution, as a network of neighbourhood groups which would spy on residents and stamp out any subversive activity.

As well as acting as the regime’s eyes and ears, CDRs coordinate community activities. In the last few years, they have also become involved in health and hygiene campaigns.

Most Cubans formally register as members of their local CDR – official statistics show that 93 per cent of people over the age of 14 are in the organisation.

Officials from the CDR National Directorate said they chose Cienfuegos to host this year’s celebrations because neighbourhood surveillance there had helped reduce the crime rate, targets for blood donation quotas had been exceeded.

However, in an interview for the provincial newspaper “5 de Septiembre”, Martha Ojeda Sánchez, who is CDR coordinator for Cienfuegos and was in charge of the national celebrations, admitted that problems existed.

“Of the 753 bases [in Cienfuegos], 58 aren’t functioning properly for various reasons – for example because unsuitable leaders were elected,” she said. “There are a significant number of CDRs which don’t even hold meetings or set objectives.”

Despite this, Ojeda Sánchez pointed that 303,000 new members had been recruited to the province’s CDRS.

“The membership statistics are probably correct,” he said, noting that “people who come of age are put under immense pressure to join”.

He added that senior leaders appeared uninterested in trying to find out why the CDR network had lost its ability to really mobilise people over the last decade.

“It’s no secret that people don’t come along like they used to,” López Mederos said. “When I was a boy, there were masses of people – the venue would fill up.”

Nowadays, he said, “out of a household of seven people, only two will go – sometimes no one. If you ask them to walk two or three blocks for a meeting, they won’t come.”

The anniversary celebrations begin the day before the date itself, September 28, with the preparation of a traditional “caldosa” stew of root vegetables and pork.

For Rubén, a CDR member in the Juanita neighbourhood, the anniversary meal and party are still “one of the only moments in the year that Cuban families get together and socialise”, although he noted that “the state is giving fewer and fewer provisions for it”.

In Cienfuegos city, it was clear that some CDRs did not hold local parties at all on the day of the anniversary. When asked why this was, CDR member cited “a lack of resources and general apathy”.

José Suárez, a resident of the city’s Tulipán neighbourhood, said Cubans were “not in the mood for parties”.

In former times, Suárez said, people went along “to fill their stomachs with a bit of caldosa or to have a beer”. These days, he claimed, “even that is too much effort”.

Alejandro Tur Valladares is an independent journalist in Cuba.

Cuba
Political reform
Connect with us