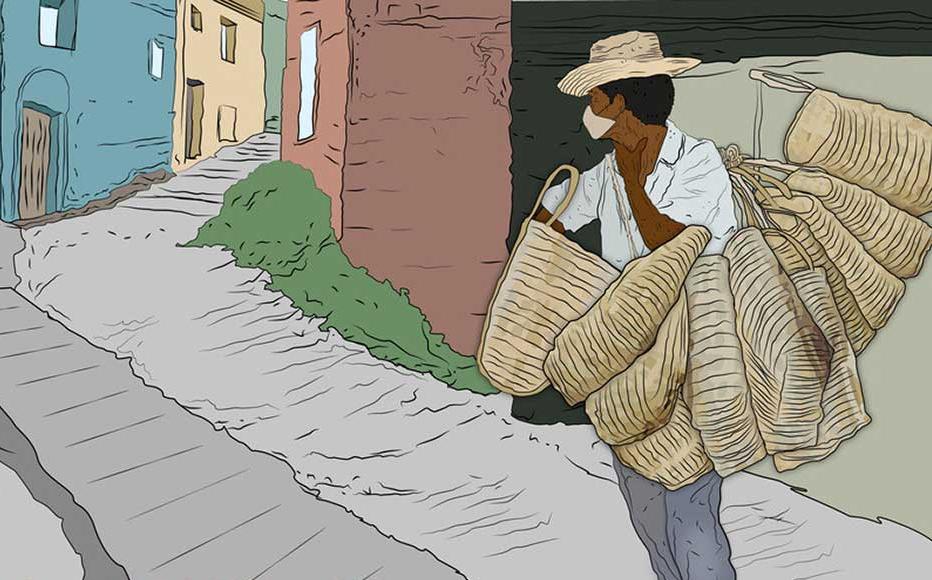 Francisco González, an 85-year old who walks with the aid of a stick, sets out at dawn every day to trudge nearly six kilometres through the streets of the Cuban city of Holguin. Along his route, he sells bags he makes out of leaves from the Yarey palm, commonly used on the island for carrying food products.

Francisco gets 310 Cuban pesos (12 US dollars) a month from his pension, which is not enough for him to live on.

So although his age puts him in a high-risk category for Covid-19, he says he can’t get by without the meagre income from selling the bags.

“The doctor told me not to go out," González says. “I had to stay home because of my age, but the need forces me to go out."

Despite the grave risk to their health, poverty and poor social care provision means that thousands of older adults in Cuba must continue to find ways to supplement their income amid the pandemic.

The World Health Organization (WHO) has warned that age is one of the most critical risk factors for dying from the virus; seven out of ten Cubans who have died due to the pandemic were 65 or over.  In Holguin province, all four of those who have died so far from coronavirus were above 65.

Due to a low birth rate, a surge in life expectancy and the increasing number of young people emigrating, Cuba is now one of the oldest countries in the region. About one of five Cubans are over 60 years of age.

At the start of the pandemic, this aging population was seen as one of the country's most serious points of vulnerability.

Poor provision exacerbates this issue. While life expectancy in Cuba is similar to that of the world’s wealthiest countries, older Cubans depend on meagre pensions and weak social care programmes. Those without family to help them or relatives abroad to send them money have to go out to work.

This means that older people selling newspapers and sweets or carrying out other odd jobs are a common sight in the streets of Cuba.

Rodriguez needs the extra income, because while social security laws have improved over the years, pensions remain low and range from just 242 pesos (10 dollars) to 500 pesos (21 dollars) a month.

A study carried out by economists Betsy Anaya Cruz and Anicia Esther Garcia Alvarez found that each Cuban citizen needed at least 550 pesos (22 dollars) a month to buy food and essentials goods, even those distributed at subsidised prices.

One government policy intended to help pensioners make ends meets is the Family Care System (SAF), a network of community dining halls offering food to the most vulnerable. There are also around 450 old age homes in the province.

Yet such social programmes remain underfunded. The SAF network has 5,800 beneficiaries in Holguin, 3,000 of whom are older people, according to statistics published by the state media. However, there are 210,000 people over 60 in the province.

Official data also shows that Holguin can only provide social assistance through programmes like SAF to one person in 1,000, while nursing homes provide care to four out of every 1,000 people over 65.

The pandemic has put even more pressure on those people who should have retired years ago.

At 81, Romarico Aguilar has started working as a scissors and knives sharpener again, as he did for 40 years of his working life. The craft has almost died out, but he resurrected it as soon as lockdown restrictions were eased.

“I have to work because life has become very expensive, so I have to keep working,” he said.

Some older people say they fear starvation more than the risk of catching Covid-19.

Miguel (not his real name) is among the many older people who sell newspapers, in his case the official Granma newspaper for one peso (four cents) a copy.

He has a fixed place on the city's boulevard which he doesn’t move from as “it’s a good spot to sell newspapers quickly,” he explained.

Miguel suffers from high blood pressure, another common risk factor associated with fatalities from Covid-19. The 66-year old worked as a mechanic’s assistant until his retirement and now receives a pension of 280 pesos (ten dollars) a month.

“In the beginning, I was selling peanuts, but that is hard work, and my health wasn't too good,” he said. “Now I sell newspapers. If I don't work, I will starve.”