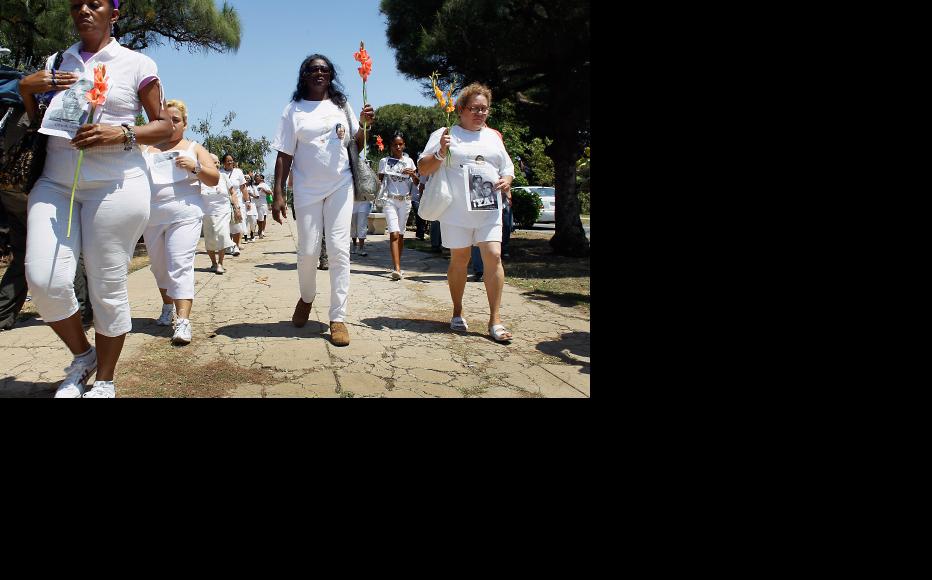 Berta Soler (C) and other women from the Ladies in White group march together on March 25, 2012 in Havana. (Photo: Joe Raedle/Getty Images)
The link has been copied

While some view it as a unique opportunity to promote change, others warn that the visit takes place amid rising incidences of political detentions and human rights abuses.

Last December the Cuban Commission for Human Rights and National Reconciliation (CCDHRN) recorded some 930 politically motivated detentions. This was nearly double the number - 489 - for same month of the previous year.

Antonio G Rodiles, the director of the opposition group State of Sats, is one of the most vocal critics of the detente.

He warned that the political process currently unfolding had little substance, and that it was still unclear just who Obama would manage to talk to during his visit.

“Whether he’ll meet with all the [civil society and political] sectors that he wants to remains to be seen,” Rodiles said. “Unfortunately violence has increased, above all political arrests.”

State of Sats, along with other groups such as the Damas de Blanco (Ladies in White), were supporting new campaign calling for the release of political detainees, under the auspices of the Rights and Freedom Forum.

Todos Marchamos (We All March) demands an end to repression and amnesty for political prisoners.

“The arbitrary arrests started to become more frequent. The Rights and Freedom Forum responded with this campaign,” Rodiles said.

José Daniel Ferrer, coordinator of the Patriotic Union of Cuba (UNPACU), one of Cuba’s largest movements, has a more conciliatory attitude.

Since the détente was announced on December 17, 2014, UNPACU has considered the “United States’ government’s movements to be positive,” he said.

The biggest impact, Ferrer continued, was on the mindset of ordinary Cubans.

“The people’s mentality is changing,” he said. “Now it’s hard to see a Cuban who isn’t critical of the system.”

More people were joining dissident groups, which explained the soaring number of arrests, he continued.

Rodiles disputed this, arguing that the actions against the opposition had increased because the regime felt much more secure.

“President Barack Obama’s visit will not change Cuba as long as the Cuban government continues to say that it does not want interference in internal affairs and continues stating that it is a sovereign government,” Soler argued.

As for the role of the opposition in this new context, Soler insisted that her group had no plans to shift its policy.

“We have always advocated the freedom of political prisoners in Cuba. This March 30, we will have completed 13 years of peaceful struggle,” she said.

Soler raised issue of deteriorating human rights on the island in a letter to Obama on January 28.

In his response, the US president wrote, “We take seriously the concerns you have raised regarding human rights in Cuba.”

“I will raise these issues directly with President Castro, just as I have done in the past. I also have great hopes for my meeting with Cuban civil society, where I hope to hear more of their concerns,” Obama added.

Cuba is ranked 169 out of 180 countries in the Reporters Without Borders’ World Press Freedom Index.

According to the 2016 report by the Freedom House NGO, Cuba was 193 out of 210 countries and territories.

Manuel Cuesta Morúa, head of the Arco Progresista Party and the leader of the Otro 18 (Another 18) campaign, believes the visit is a bold move by the Obama administration.

“Two political cycles are ending, one is a hostile and confrontational policy, the other is the end of the revolutionary political power,” Morua continued, adding that he was hopeful for future free and democratic elections in Cuba.

“My political strategy has always been to mobilise ideas as resources and as a vision, that the transition must be gradual, through dialogue, agreed and put into practice through legal or constitutional reforms,” he said.

The détente was a positive start, he continued.

“I’m one of the people who saw the policy change positively; it represents a challenge and an opportunity. It will help to change the mentality of the Cuban people who have been educated with the idea that the USA is their historic enemy,” Morua said.

Ferrer agreed, arguing that Cubans have begun to realise that the guilty party in the conflict was the Cuban government rather than the US.

“It’s about attitudes; Cubans feel like now it’s the Cuban government’s turn” to make changes, he continued, adding that the first step would be to end restriction on entrepreneurship.

Ferrer, who will be attending an event with the US delegation, said he planned to thank Obama personally for his solidarity with the Cuban people.

Change was coming, he continued, adding, “It is becoming more complicated for the Cuban regime to justify its acts of repression.”

Cuba
Diplomacy
Connect with us