Change means people will be allowed to buy any goods on sale without making them any more affordable.

Change means people will be allowed to buy any goods on sale without making them any more affordable. 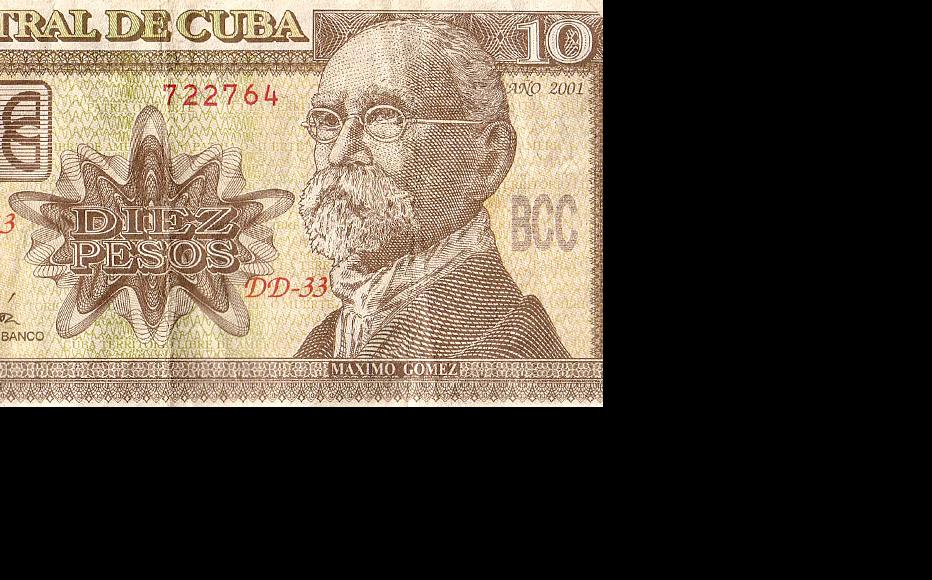 A ten-peso note. (Photo: David Sasaki/Flickr)
The link has been copied

Cubans have welcomed a decision to phase out an unpopular dual currency system, but are doubtful that the step will help solve broader economic problems.

Cuba has two monetary units, the normal peso and the “convertible peso”. The government pegs the latter 1:1 to the US dollar, and it is mostly used in the tourist sector, foreign trade, and in the more up-market shops. The ordinary peso currently stands at 26.5 to the dollar, although it is not actually convertible.

As a first step in the phased transition, shops that now only accept convertible pesos will be required to take payments in the normal kind, with an exchange rate fixed at 25 to one. That will allow anyone to shop in stores from which they were previously excluded, but it does not mean they will be able to afford to buy things.

The new policy is to work towards a managed convergence between the two currencies, although the government does not seem to be planning to end up with a free-floating, fully convertible unit. An article in the official newspaper Granma said the authorities were aiming to achieve monetary unification while managing other factors like economic productivity and Cuba’s distribution and retail systems.

The second, convertible currency was introduced in 1994 to provide a monetary vehicle for trading with the outside world – a role informally played by the American dollar before then. Meanwhile, the state was able to continue controlling prices and wages by setting a fixed value for the existing currency.

The policy resulted, however, in considerable resentment among a population paid in a currency that could not be used to buy imported goods.

The situation has been likened to “economic apartheid” by Magdelivia Hidalgo, founder and spokeswoman of the Latin American Federation of Rural Women or FLAMUR, a Cuban group that has been running a campaign called “Same Currency”.

In 2007-10, FLAMUR collected 40,000 signatures on a petition calling for pesos to be accepted in all of Cuba’s shops. The petition was submitted to the Cuban parliament, and group members believe it helped shape the change.

“Although the government doesn’t acknowledge our role, the people know what we’ve done – they signed our petitions,” said Kenia Pérez Montes de Oca, a FLAMUR member in the eastern Havana township of Guanabacoa.

Cubans are generally pleased about the prospect of reform. Some harbour hopes that it will enhance the purchasing-power of the money in their pockets.

“It’s going to mean that the national currency, the peso, increases in value, and it will lead to wage increases,” Miguel Fernández, a 41-year-old resident of Havana, said.

Adonis Villavicencio, 35, added, “It’s a positive start to have only one currency circulating in the country. Ensuring that tourists spend [normal] pesos in the shops and use the same currency at tourist centres is great progress. It assigns a value to the national currency that was lost with the dual currencies.”

Economist Osmel Quintana was among those warning that monetary reform could not by itself bring about greater prosperity.

“To achieve positive results, there would have to be sound economic foundations,” he said. “This country’s gross domestic product, for example, is not at the minimum level that would be needed for this strategy.”

Others, too, have realised that goods will not become any more affordable when their prices are translated into pesos.

“It isn’t going to change anything. They’re going to make shops use the national currency, but at convertible peso prices,” said 45-year-old Havana resident Ángela Penin. “It will be the same, just with a single currency.”