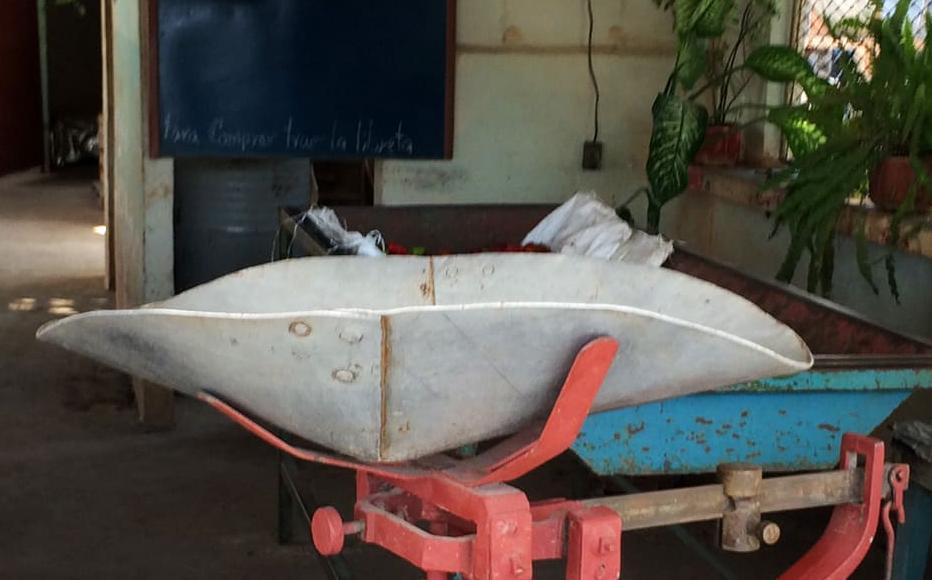 An empty food marked in Holguin, Cuba. © Fernando Donate
The link has been copied

Photos of Camilo Cienfuegos and Ernesto "Che" Guevara, two of the leaders of Cuba's revolution, hang on the walls of the state shop Frutas Selectas (Select Fruits) in the city of Holguin. Also displayed is a large poster with the slogan, "Select Fruits: the choicest of the tropics."

What is missing, though, are any actual fruits for sale, or for that matter any food products at all.

Despite this, long queues form outside, with people waiting expectantly for the shop to open to sell anything at all.

"We have queued for two days waiting to see if they would deliver anything," said Hilda Lobaina, a 72-year-old homemaker. The mask covering half her face did not hide the frustration in her eyes.

"We are the only country in the world where people have to queue in front of markets to wait for any products to arrive," said a retired man who identified himself only as Antonio.

While Cubans have suffered food shortages for years, the country's economic situation has deteriorated yet further due to the Covid-19 crisis. In recent months, markets all over Cuba have been virtually empty.

Cuba does not produce enough food to feed its population, instead importing supplies mainly in dollars and euros. In recent months, the state has had more difficulty than ever in accessing the hard currency necessary to do this. The virtual collapse of the tourist economy has exacerbated this deficit.

In the last 15 years, Cuba has had an average of 2.2 US billion dollars available in hard currencies at the end of every quarter, according to statistics from the Bank for International Settlements (BIS). Currently, the amount available is less than half that.

According to the International Monetary Fund (IMF), there has been a drastic reduction in imports to Cuba. These dropped by 34 per cent in the first eight months of 2020 as compared to the same period in 2019.

Cuba has also stopped buying from leading food suppliers such as Brazil, the US and Spain.

In 2020, exports from Brazil to Cuba fell sharply by 23 per cent compared to the previous year. Spanish sales to the island fell by 36 per cent and, in the case of the US, exports went down by 45 per cent.

Amid severe shortages of chicken, oil, rice, corn and beans, Cubans fear a repeat of the so-called Special Period, the economic crisis of the 90s that was triggered by the collapse of the Soviet Union, at the time Cuba’s most important ally.

"Undoubtedly, this is the most critical situation impacting Cuba since the Special Period," said economist Ernesto Hernández-Catá, a former professor at John Hopkins University.

In most countries, the perception is that the pandemic is to blame for current economic problems.

But in Cuba, many analysts see the pandemic as just another factor impacting the Cuban economy.

These include the economic collapse of Venezuela, Cuba's leading commercial partner, as well as the tightening of US sanctions during the Trump administration.

Cuba also suffers from its inability to produce food, or goods other countries are interested in buying.

Economist Luis R Luis, one of the directors of the Association for the Study of the Cuban Economy (ASCE), explained that "Cuba is undergoing a chronic currency crisis, due to the decline in exports dating back many years… Although the crisis is a by-product of some short-term events such as the pandemic, the more serious problems affecting the Cuban economy are structural".

Even before Covid-19 spread throughout the world, the government had warned of serious shortages and even the probability of a new Special Period.

"The seriousness of the moment requires setting clear and well-defined priorities, to avoid repeating the difficult moments of the Special Period," President Miguel Díaz-Canel said in an April 2019 speech.

This followed a similar statement from Raúl Castro, vice-secretary general of the Communist party. He warned Cubans that although the country had a more diversified economy than when the Soviet bloc collapsed, they would do better "always preparing for the worst".

As 2019 rolled on, statistics gathered by BIS on deposits and loans in international banks showed the country gradually running out of dollars and euros.

In March 2019, Cuban state companies had the equivalent of 2.3 billion dollars in hard currencies deposited abroad. In December, the figure was down to 1.3 billion dollars, and continued falling last year.

According to official BIS data, Cuban companies held the equivalent of 867 million dollars in bank accounts abroad at the end of the second quarter of 2020, the lowest rates for the Cuban economy since the end of 2005.

While Cuba has close ties with countries such as Russia and China, it imports little food from them. Without hard currency, the country is left without food.

Official data from abroad show that Cuba is importing significantly less food than a year ago.

Last August, imports of frozen chicken from the US were down a quarter from the same period in 2019. Between January and September, imports of Brazilian soy to produce cooking oil was half the previous year's figure.

For decades, queues and the uneven distribution of certain products have been a cyclical problem in Cuba. However, in recent years, there have been shortages of nearly all consumer goods.

Even though data for 2019 is not yet available, many Cubans report that shortages worsened during the pandemic.

This is evident in the long queues people have to make in front of the state shops from very early in the morning. There has also been a boom in trading on the black market.

María Eugenia Durán, 67, has been waiting two hours for her turn to buy yucca in the Holguin city market, the only product on sale in the shop.

"There is a shortage of everything. To buy anything, one has to make endless queues. Sometimes, you end up with nothing because the shops run out of products," Durán said, clutching an empty bag.

Luis, the economist, said that the food crisis would continue as long as hard currency remained in short supply.

"Recent data suggests that to avoid the worst scenario – a nutritional disaster – we will have to pay a high price with a further drastic reduction of imports of medicine, fuel, and other raw materials," he said.