Cuba: Last Chance to Leave for US

Washington-Havana détente means many are worried time is running out to seek a new life.

Cuba: Last Chance to Leave for US

Washington-Havana détente means many are worried time is running out to seek a new life. 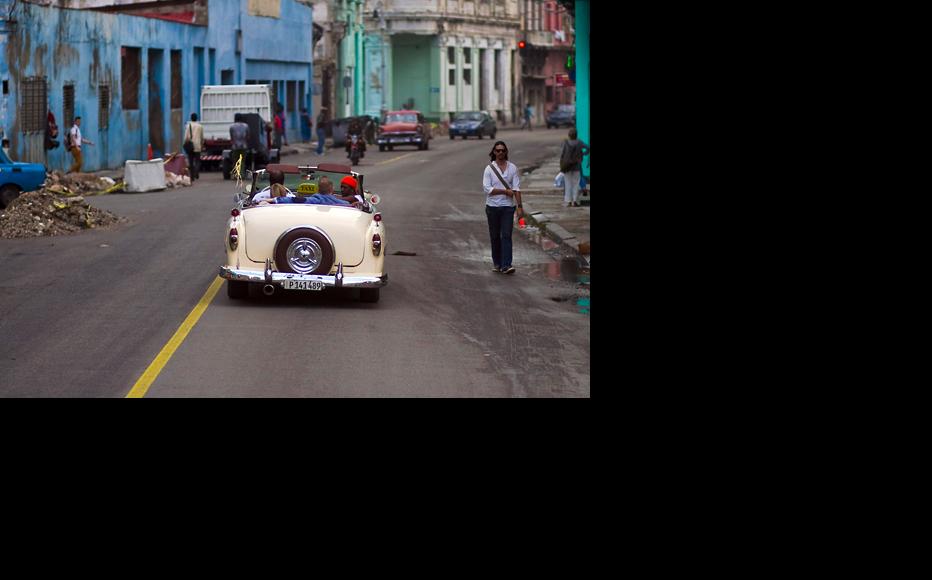 A street in Havana. (Photo: Jack Wickes/Flickr)
The link has been copied

Roberto Castillo’s finger glides over the map showing one of the possible routes he can take through Central America when he leaves Cuba.

His final destination will be the United States where he aims to take advantage of the Cuban Adjustment Act, which allows Cubans arriving on US soil to request legal residency.

It will be a difficult and risky journey. But as far as as Castillo (not his real name) is concerned, this is his last chance to get away from the economic shortages and lack of opportunities in Cuba.

“I’m 31 years old and I’m a mechanical engineer,” he said. “I worked in the 26 de Julio agricultural tool factory in Holguín but I never saw the benefits of my work.”

Castillo lives with his mother, stepfather and older brother in an unfinished two-room house. Construction materials are prohibitively expensive for the majority of the population.

Castillo’s salary at factory was 650 pesos per month (26 US dollars); a sack of cement can cost up to 140 pesos (six dollars), amounting to a fifth of his monthly income.

His wages were barely enough to cover the costs of the country’s staple foods when pork costs 35 pesos per pound, rice five pesos, and beans ten pesos.

Confronted by such difficulties, the family decided to obtain a so-called cuentapropista license, which allows small-scale private enterprise. For more than two years they have run a café at the entrance of their house, managed by Roberto’s stepfather, who made the initial investment.

“I stopped working for the state because I get more money with a private business, on average 1,000 pesos per month (40 dollars); but it’s not enough to meet our economic needs,” Castillo said.

He calculates that leaving Cuba will cost around 10,000 dollars. That includes a flight, which has to be a round trip to put immigration agents at his first destination off the scent. The rest of the money will cover accommodation and transport up to Mexico and the cost of a so-called coyote, or people smuggler.

The sum is made up of family savings and a loan from a friend, which he will have to repay with interest within two years.

The family agreed that Castillo should use the family’s savings for the trip because of the lack of opportunities for them in their own lives.

“My stepfather convinced me to make the trip,” Castillo explained. “He’s given me material and moral support from the beginning. My mother also agrees, so that’s why I can’t fail. My loved ones’ futures depend on the money I send back from the US.

“I’m betting on all or nothing. Life is risk and I have faith that I can do it,” he said, clasping a picture of Cuba’s patron saint, the Virgin of Charity, in his right hand.

To prepare for his trip, Castillo made a list of all the countries with visa-free entry for Cubans, such as Russia and Trinidad and Tobago.

“I think that going through the Caribbean will be easier and cheaper,” he said.

He knows that it will be a difficult journey and that he will have to face many obstacles. The first will be passing immigration at his initial destination.

Thousands of Cubans were stranded when they tried to enter Costa Rica last year and others are currently stuck in Quito, Ecuador and Turbo, Colombia.

Castillo has also heard stories about the coyotes, the people who will guide him throughout his journey from Central America to the US.

“I know cases of Cubans who have been ripped-off and have lost all their money or have died in the hands of the coyotes,” he said.

But these tales will not stop him in his efforts to achieve a better life that he says he will never find in Cuba.

The 1966 Cuban Adjustment Act means that citizens can automatically apply for asylum once they reach US territory and are almost certain to be allowed to stay.

A 1995 revision to this act means that the US Coast Guard returns those intercepted at sea to Cuba, the so-called “wet foot/dry foot” distinction.

Before migration reforms in 2013, the Cuban government prevented its citizens from travelling freely.

The majority of Cubans left the country illegally and arrived on North American soil on improvised rafts.

The journey started from the northern Cuban littoral, from a point close to the Florida coast.

Some achieved their goal, but most were either intercepted at sea by the US Coast Guard or when their rafts landed in other Caribbean countries. In both cases they were deported back to Cuba.

According to data from the Pew Research Center, the US Coast Guard stopped 3,505 Cubans at sea in 2015.

That is why Castillo decided against the idea of reaching North American soil on a raft.

“The rafts are crude creations and I could be shipwrecked or drowned; or I could get intercepted by a coast guard boat and be sent back to Cuba,” he said.

Since 2013, when Cuba abolished its exit permit requirement, the land route has been more appealing. Arriving by land is not only less dangerous but also more likely to lead to US residency.

Everything has now been put in place, and Castillo plans to set off soon.

“I’ll leave Holguín by bus to Havana,” he said, showing his ticket.

He will arrive in the capital a day before his flight and will stay at the Ulloa hotel.

“This hotel is very close to the bus stop that will take me to the airport,” he said.

Castillo believes that the Cuban Adjustment Act will be revoked soon because of the progressive unfreezing of relations between Havana and Washington, which began in December 2014.

“One day we were enemies and the next day we woke up to the news of the reestablishment of relations,” he said, adding, “Things will not improve in Cuba even if the embargo ends. Opportunities only come once in a lifetime and I have to take advantage of that to leave the country now.”

A modified version of this story first appeared on the Animal Político website.  Castillo has since left Cuba to head for the US.

Cuba
Migrants
Connect with us