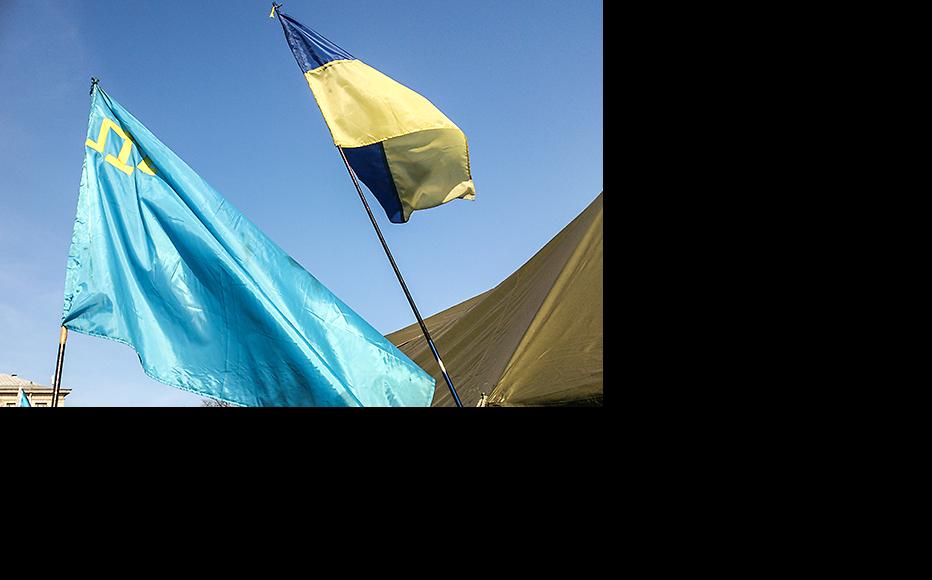 In the latest affront to veteran Crimean Tatar leader Mustafa Jemilev and to the Crimean Tatars on the eve of the 70th anniversary of the deportation of their nation, a search has been carried out at Jemilev’s home.

His wife Safinar was taken ill as a result and needed to be hospitalised. Mustafa Jemilev, the 71-year-old former leader of the Crimean Tatar Mejlis and a current member of the Ukrainian parliament, could not be there since Russia has barred him from entering the Russian Federation and his native Crimea which Russia annexed in March.

He says he received a phone call telling him a search was being carried out at his house and that his wife was in hospital. “OMON [Russian riot police] with automatic rifles surrounded the whole block. There were 11 or 12 buses; they appear to have been preparing for some kind of war,” he said.

Jemilev says the police claimed that the search was because they did not trust the investigation carried out a year ago after Jemilev’s son Hayser accidentally shot and killed a friend of the family, Fevzi Edemov. They are planning to begin the investigation again.

Since Jemilev alone has a key to his office, the OMON officers entered by force. They also searched the home of the Mejlis’s press secretary, Ali Hamzin.

Jemilev reports, “After they'd searched Ali Hamzin’s home, one of the officers said: ‘You can thank us that we didn’t plant anything’. It’s hard to say whether they planted drugs or weapons on me, but that at least is what they said.”

Law-enforcement officers have already summoned around 150 Crimean Tatars in Stary Krym for interrogation, allegedly because the women wear headscarfs. They have had their fingerprints taken and have been asked how long they have been going to the mosque.

Earlier, Jemilev stated that FSB officers are almost openly watching people in mosques, picking out those who seem most devout, with this being treated as a form of extremism.

Mustafa Jemilev was informed on April 22 that a five-year-ban on entering his native Crimea had been imposed on him. Both Moscow and the government installed at gunpoint in the Crimea have yet again resorted to dishonest subterfuge. Just as Russian president Vladimir Putin denied Russian military involvement until long after the annexation of the Crimea, so too have Russian authorities lied about the ban. The very next day, there were public statements denying the authenticity of the paper which Jemilev was handed. That document does indeed look dubious and no other has been issued, Jemilev says.

The ban has, however, already been enforced. On May 2 he was stopped from flying to Simferopol via Moscow, and forced to return to Kiev.

The Mejlis responded by cancelling all events planned for a festival on May 3 and called on Crimean Tatars to come and meet Mustafa Jemilev on the border between the Kherson region and Crimea. Around 5,000 Crimean Tatars did precisely that. In an especially shameful development, armed OMON officers were deployed together with the so-called Crimean “police” to prevent Jemilev from crossing into Crimea.

It was yet again a credit to Jemilev and the Crimean Tatars that the stand-off ended without bloodshed, though not, unfortunately, without repression. The “prosecutor” in Crimea, Natalya Poklonskaya, responded by seeking criminal charges against some of the participants in the peaceful protest. Others have already received fines.

Polonskaya also issued the head of the Mejlis, Refat Chubarov, with a warning that the assembly could be dissolved, claiming that the protest was “action of an extremist nature”.

Chubarov is quoted as saying that “it seems any Crimean Tatar can be prevented from entering his homeland – [someone] who fought for 50 years for the right to live in his homeland.”

Mustafa Jemilev recently became the first winner of Poland’s Solidarity Award, and just this week was he was awarded the Truman-Reagan Medal of Freedom, jointly with Myroslav Marynovych. On April 15, he was awarded Turkey's highest honour, the Medal of the Republic.

Six months old when the entire Crimean Tatar nation was driven from its homeland, Jemilev spent much of his life fighting for the Crimean Tatars’ right to return to Crimea. His defence of Crimean Tatar rights and Ukrainian democracy and his unwavering commitment to purely peaceful protest have won him deep respect among Ukrainians and throughout the world.

Jemilev spent 15 years in Soviet labour camps, and it is not only a personal tragedy for him and his family, but for all Crimean Tatars and for Ukraine, that Russia seems incapable of shedding that legacy of repression.