Crimean Canal Key to its Liberation

Ukrainian strategy focuses on retaking control of vital water source that supplies the vast majority of the peninsula's needs. 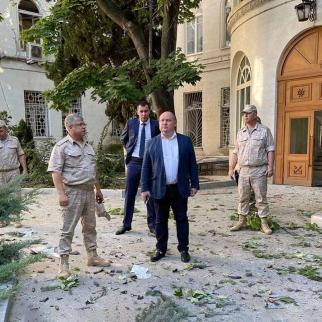 In this handout photo released by the telegram channel of Sevastopol mayor Mikhail Razvozhaev on July 31, 2022, Governor of Sevastopol Mikhail Vladimirovich Razvozhayev, center, stands at the scene of explosion at the headquarters of Russia's Black Sea Fleet in Sevastopol, Crimea.

Crimean Canal Key to its Liberation

Ukrainian strategy focuses on retaking control of vital water source that supplies the vast majority of the peninsula's needs.

As Ukrainian forces continue their fight to liberate the whole of the Kherson region, analysts stress that control of the North Crimean Canal remains key to Ukraine retaking control of the peninsula.

For decades, the canal has provided the vast majority of the peninsula's freshwater needs. After Russia’s annexation of Crimea in February 2014, the Ukrainian authorities blocked the canal, leading to a catastrophic lack of water on the peninsula until Russian troops invaded the Kherson region in March 2022 and regained control of the channel.

The canal has long been of huge strategic importance to Moscow. Following WWII, supplying water to Crimea - where Russians were resettled following the wholesale deportation of Crimean Tatars – was one of the Soviet Union’s priorities.

After the Kakhovsky reservoir was created in the lower reaches of the Dnipro river in the early 1950s, the construction of the North Crimean Canal began in 1957.

“The purpose of the construction of the canal was to provide Crimea with drinking water and develop irrigation systems. That would allow the agriculture of the peninsula to reach a new level,” said Volodymyr Hryniuk, the former director of the Ukrdniprovodhosp Design and Research Institute which put together the plans for the canal. He explained that, although four phases were planned, the state did not have enough funds to fully implement the project and only three were completed.

“According to the project, the water from the canal was supposed to irrigate an area of 504,000 hectares of agricultural land. This is about one-fifth of the area of the peninsula. But, as a result [of only three phases being completed] it supplied around 300,000 hectares.”

The canal, more than 400 kilometres long, carries water from the city of Tavriysk in the Kherson region to Crimea. The first half of the canal is self-flowing, while the other sections are operated by a four-stage mechanical water lift.

The canal worked seasonally from March to December, and to ensure a stable water supply, six reservoirs and 126 pumping stations were built in Crimea, along with some 14,000 kilometres of collector and drainage networks.

Until 2014, more than 1.2 billion cubic metres of water from the Dnipro river was supplied through the canal to Crimea for drinking water supply and irrigation, making up 85 per cent of total consumption.

It facilitated fish farming and agriculture, with output growing steadily over the years. This plummeted in 2014 after acting head of the Presidential Administration of Ukraine Andrii Senchenko ordered the water supply to be blocked, arguing that this would cause as much damage to Russia as military resistance.

Mykhailo Yatsyuk, the director of the Institute of Water Problems and Land Reclamation of the National Academy of Agrarian Sciences of Ukraine, said that production had continued to significantly decline over the past eight years, with crops such as rice having effectively disappeared.

"Soil degradation is taking place – nothing will be able to grow on this land,” he said.  “In addition, they diverted the flow of the North Crimean Canal from the Salhyr River through reservoirs to provide the residents of Crimea with drinking water. But there has been a degradation of Crimean river basins, horizons have been depleted, groundwater is disappearing.”

He noted that since 2015 summers had seen an unprecedented level of drought in Crimea. Since 2018 the occupation administration of Crimea had declared a regular summertime state of emergency with households receiving water for only a few hours a day.

At the start of the full-scale invasion, Russian forces – having seized control over the canal in Tavriysk - destroyed the dam and released water from the Dnipro river into Crimea.

Yatsyuk said that this had devastated the water balance and led to June floods, in connection with which the occupation administration declared a state of emergency.

“Now they provided themselves with drinking water, provided military bases, in particular in Sevastopol [with water], but the irrigation system is lost,” Yatsyuk said.

According to official Ukrainian data, the Russians are transferring about 4.3 million cubic metres of water to Crimea per day. As of the beginning of October, the cost to Ukraine from the illegal transfer of water through the canal amounted to more than 15.5 billion hryvnias (387 million US dollars).

A source close to the leadership of the Southern Operational Command of the Armed Forces of Ukraine, whose units are focusing on unseating Russian forces in the Kherson region, emphasised that the canal was key.

Blocking the water through the canal in winter will not have a significant influence on the supply to Crimea, but will be “a symbolic move” the source said.

In spring, however, the lack of water in the canal would create supply problems for the population and the peninsula’s military bases, the source continued, adding, “Gaining control over the Kakhovskaya hydroelectric power plant and managing the North Crimean Canal are, quite logically, one of the primary goals [of the military efforts].