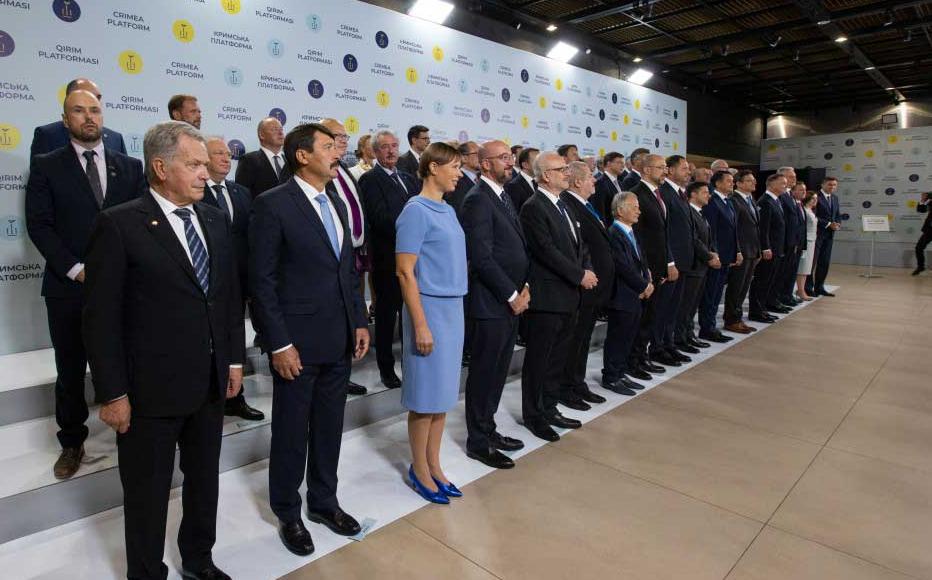 World leaders pose together at the Crimean Platform summit. © Official website of the President of Ukraine president.gov.ua
The link has been copied

Analysts in Ukraine have warned that, while the recent Crimea Platform summit certainly served to antagonise Russia, it needs to be followed with a concrete plan of action to be considered a success.

The inaugural August 23 gathering in Kyiv – angrily deemed “a hollow Russophobic endeavour” by Russian foreign minister Sergey Lavrov – was initiated by the Ukrainian authorities as a means of keeping the issue of Crimea on the global agenda.

The event was attended by high-level representatives of 46 countries, including nine European presidents and four prime ministers. At the end of the forum, a joint declaration confirmed the illegitimacy of the Russian occupation and announced the formation of “a consultation and coordination format for the peaceful end of the temporary occupation”.

The signatories also announced the possibility of strengthening sanctions “if Russia's actions require it.”

The Crimea Platform clearly had the effect of infuriating Moscow. Ahead of the forum, Russia announced that it was expanding its sanctions list. Ukrainian foreign minister Dmytro Kuleba and his deputy Emine Dzhaparova, both of whom supervised the summit preparations, were among those added.

“Usually, they do not touch foreign ministers with sanctions, in order to maintain at least some channel for dialogue. But they were finally fed up,” Kuleba commented on his Facebook page. “Russia promised that it would avenge the Crimean platform. And it took revenge on me. However, Russia will not be able to stop either me or any of us in Ukraine and abroad, who have been united by the Crimean Platform.”

Political analyst Galina Zelenko, a member of the Ukrainian Academy of Sciences, said that Moscow had had two choices – either ignore the Crimean initiative or to actively oppose it.

“Russia has chosen the second path, thereby showing that it takes this initiative very seriously,” she said.

Lyubov Tsibulskaya, head of the Centre for Strategic Communications and Information Security, agreed. She noted that Russia, having failed to achieve the recognition of the annexed peninsula, was now trying to normalise its presence there.

“This is the strategy that the Russian Federation has been pursuing for several years now,” Tsibulskaya said. “It started with the participation of so-called Crimean delegates in international forums held in Russia, then, European politicians – the marginal ones though - visited Crimea; soon global business will return to the peninsula and then, Russia will have every reason to say that de facto recognition has already happened and it is only a matter of political formality.”

Some Ukrainian politicians said that the Crimea Platform was key to finally putting Russia on the back foot.

“This is a very good idea - until now we have been mostly defending ourselves on the issue of Crimea,” said Aleksey Goncharenko from the European Solidarity party. “And now we tried to attack for the first time. Even if the first attempt is not very successful, over all it is the right strategy. It’s a pity that we did not come up with such an idea earlier.”

Indeed, in his closing statement to the summit, President Volodymyr Zelensky said that the initiative “clearly sets the non-recognition of the illegal annexation of Crimea, the obligation to consider the introduction of additional sanctions against the Russian Federation in case of further aggression, the necessity to join efforts of all participant countries to strengthen security and stability in the Black Sea region.

“For the first time, Russia was recognized as the occupant state at the international level and it must immediately stop the violation of human rights in the temporarily occupied territory, ensure unrestricted access to Crimea for international humanitarian and human rights organisations,” he said.

Other participants made similarly optimistic forecasts.

“We made the first step - we gathered and showed that we are ready to defend the sovereignty and territorial integrity of Ukraine,” said the speaker of the Czech Senate, Milos Vystrchil.

The question remains, however, whether the summit’s success will actually put Crimea back on the global agenda in a meaningful way that might spur efforts at actually ending the peninsula’s occupation.

“You can enjoy the painful reaction of the Russian Federation to this summit as much as you like, but it will only make them increase their efforts to achieve their goal,” Tsibulskaya said. “In order to seriously claim control over the initiative, Ukraine's actions must be systemic.”

A comprehensive plan of action was the only way Ukraine would be able to block Russia’ plans for the “creeping recognition” of its sovereignty over Crimea, she continued - especially in the long term, in the event of any change of power in the Kremlin.

“At least in this case, the negotiating position of Ukraine will be stronger than it is now,” Tsibulskaya concluded.

Some do not believe that the Ukrainian government have the capacity for such strategic planning.

“There are serious doubts about the ability of the current Ukrainian authorities to work in the long run,” Zelenko said. “Until now, they have tried to solve problems with the help of bright but short-lived campaigns.”

She warned that the “the Ukrainian authorities may feel the negative consequences of the Crimean platform soon,” adding, “The Kremlin is finally disappointed with Zelensky who proved to be an inconvenient president for them. They have already sent a warning in the form of sanctions for the head of the foreign ministry.

“Most likely, in relation to Ukraine, a strategy will be enacted similar to one that worked under [former president Petro] Poroshenko - no compromises and maximum damage to the Ukrainian government.