Russia’s economic woes will have a major knock-on effect in the region.

Russia’s economic woes will have a major knock-on effect in the region. 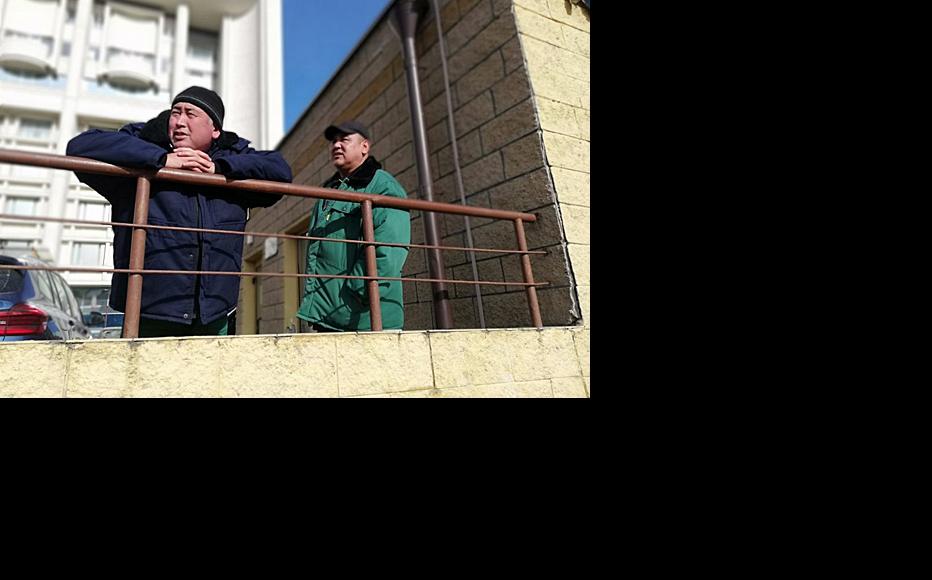 Central Asian migrants in Russia. (Photo: CABAR/IWPR)
The link has been copied

Analysts warn that a possible recession in Russia sparked by the coronavirus crisis could signal serious trouble for Central Asian countries that rely on migrant worker remittances as a significant part of their economy.

Bloomberg Economics forecasts predict a 50 per cent chance Russia will go into recession as a result of the pandemic. According to the federal service for state statistics, more than 4.5 million migrants entered Russia in 2019 to work, study or reside permanently. Central Asia accounts for about 3.4 million of these migrants.

Denis Berdakov, the director of trans-boundary research at the Network of Central Eurasia, said that the quarantine announced in the larger cities of Russia would be particularly devastating for Tajikistan and Kyrgyzstan. As well restrictions on movement, businesses including restaurants have been shut down for the next two months, with this period likely to be extended.

“It’s important to look at the population to migrant workers ratio,” he said. “If the population of Kyrgyzstan is 6.5 million, Uzbekistan 33 million, and Tajikistan 9.5 million, the impact of financial remittances on the economy of these countries is different. For Tajikistan and Kyrgyzstan, remittances from migrants are the key support of socioeconomic and even political life.”

Shabdan Dakharov, from Tajikistan, was a waiter at Moscow restaurant until he was dismissed a week ago due to the quarantine. He said that his wages had paid for his brother’s education and accommodation for both of them; now he is looking for other work but with no success.

“They say our restaurant is going to be closed for two months, Dakharov continued. “All of us were dismissed in a day. So far, I have money, but at the end of the month I will have to pay the rent. Now I don’t know what to do. The managers don’t make any promises, although they thought well of me.”

Berdakov said that while migrants might have money to support themselves in the immediate term, they will stop sending money to their relatives. That would have a severe knock-on effect on the economy back home.

“Many migrant workers live in Moscow with five, six, or even 20 people in one apartment,” he said. “If they worked in catering, they spent less on food. Now they can live for two to three months in rigid economic mode and the majority of them will have no money to get home.”

Some migrants are continuing to work, but their earnings have dropped dramatically.

Yusuf Azimov came to Moscow from Uzbekistan two years ago and works delivering food. Before the spread of coronavirus, he used to earn 40,000 roubles (600 dollars) a month. Now he earns only 15,000 roubles (190 dollars).

“When I worked 12 hours a day, I earned well,” Azimov said. “I used to have 10-15 orders a day; now I have only four to five orders a day. I received my salary every week, but now the managers don’t know what to do. They said they will transfer my salary till the end of month. I have two loans and look for an extra job, but in vain.”

Migrant remittances have an indirect but significant impact on domestic revenue as they are channelled largely into the purchase of new apartments, cars and basic goods such as food.

Entrepreneurs and workers from outside Russia are also at a disadvantage compared to Russian citizens.

“I have five outlets,” he explained. “I buy fruit from hothouse owners, and also from China. Now stores are empty, people buy mainly canned goods, cereals, flour. Early this year I ran into debt and paid for fruits in advance. I’ve lost almost 10,000 dollars, I think it’s going to be 50,000 dollars by the end of the month.”

Urusov said that the state supported Russian entrepreneurs by exempting them from taxes. However, as a citizen of Uzbekistan, he is not in this category.

He has been driven to selling fruit at cost price, but even that has not helped.

“This coronavirus has done great damage to me,” Urusov continued. “I had to dismiss all the sellers because I don’t have money to pay salaries.”

Kyrgyz citizens are the most privileged part of the migrant labour force in Russia due to the country’s membership in the EAEU.

They have more rights, simpler employment requirements and don’t have to leave the country after 90 days if they have long-term contracts. They also generally have good knowledge of Russian and can get higher paid jobs. This also means there are fewer illegal workers from Kyrgyzstan.

Gulya moved to Russia three years ago from Kyrgyzstan with her husband and son, and has earned enough working at a hostel to buy an apartment in the Osh region.

“I worked almost without days off,” she recalled. “I earned 2,000 roubles (30 dollars) a day plus bonuses. There were many guests in our hostel before, sometimes we didn’t have enough rooms. Now, we have only three staff members and the owner said he is going to close the hostel. We don’t want to go back to Osh because we have loans [to pay].”

In any case, returning home is not so simple. On March 20, Russia stopped its regular flights to Kyrgyzstan and Tajikistan. Migrants that had spent all their savings on plane tickets were forced to camp out at the terminal until the issue was solved by their respective governments.

It would be impossible for Kyrgyzstan, Tajikistan or Uzbekistan to repatriate thousands of their citizens back home.

“Another problem is whether to accept these people or not, Berdakov said. “If there are ill migrants among them, their transportation will aggravate the spread of the virus. They won’t be taken at one time. This is a problem of a growing load on medical facilities. Kyrgyzstan, Uzbekistan and Tajikistan have no money to pay transportation of their citizens because their budgets are deficit-ridden.”

Little support would await them back home, he continued, adding that at least had the migrant workers been able to return, they could have prepared for a hungry summer.

“At home, they won’t have jobs. They could have planted seeds if they come earlier,” Berdakov concluded. “This would save them some money.”

Coronavirus Pandemic, Giving Voice, Driving Change - from the Borderland to the Steppes
Central Asia
Economy, Coronavirus, Migrants
Connect with us