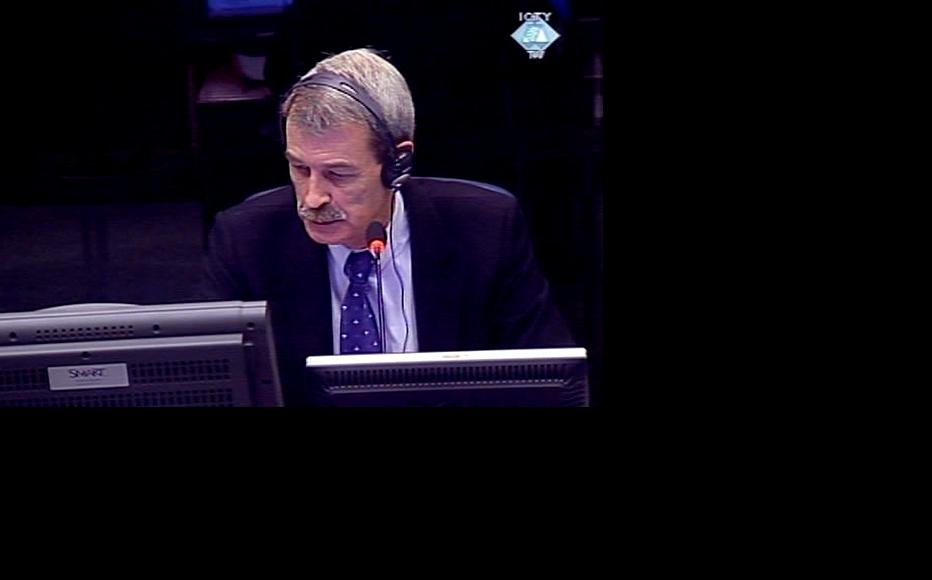 Prosecution witness Robert Franken in the ICTY courtroom. (Photo: ICTY)
The link has been copied

The Bosnian Serb army prevented fuel and other necessities from getting into the Srebrenica enclave and also stole United Nations vehicles, a former member of the UN Dutch Battalion said this week during the trial of Radovan Karadzic.

Prosecution witness Robert Franken, a member of the Netherlands army, was stationed in the eastern Bosnian town of Srebrenica from January to July 1995 as part of a UN peacekeeping force known as Dutchbat. Since 1993, Srebrenica had been designated a demilitarised UN “safe area”.

Despite its protected status, Bosnian Serb forces began shelling the town in early July 1995, officially capturing it on July 11. In the days that followed, some 8,000 Bosniak men and boys were killed at various sites around Srebrenica. The massacre has been classified as genocide by both the Hague tribunal and the International Court of Justice.

Karadzic, who was Bosnian Serb president from 1992 to 1996, is charged with individual and superior responsibility for Srebrenica, as well as for the 44-month siege of Sarajevo that left nearly 12,000 people dead.

The indictment – which lists 11 counts in total – alleges that he was responsible for crimes of genocide, persecution, extermination, murder and forcible transfer in various municipalities which “contributed to achieving the objective of the permanent removal of Bosnian Muslims and Bosnian Croats from Bosnian Serb-claimed territory”.

Karadzic was arrested in Belgrade in July 2008 after 13 years on the run. Witness testimony in this trial got under way in April 2010, and the accused represents himself in the courtroom.

According to the witness Franken, the refusal to allow fuel and other needed items into the enclave in the months leading up to the massacre amounted to “convoy terror”. He said Dutchbat had to rely on generators for all their energy needs and were unable to cook or heat their facilities.

The situation was even worse for the civilian population, who were basically getting no food, he said.

“There was absolutely insufficient food for the civilian population,” Franken said, adding that people had to rely on what they had stored up themselves.

By June 1995, Dutchbat soldiers was nearing the end of their rations and ate “peanut butter and rice for ten days”.

The prosecution then played video footage showing Ratko Mladic, commander of the entire Bosnian Serb army, arriving in Srebrenica and telling his soldiers not to “paint over” a UN vehicle they had seized. Mladic also tells them to wear items they had seized so that they would look like members of the UN peacekeeping force UNPROFOR.

Mladic was arrested last May 26 after evading arrest for 16 years. He is currently awaiting trial in The Hague.

“Was your equipment ever stolen?” prosecuting lawyer Kimberly West asked the witness. Franken confirmed this had occurred, adding that he had heard reports that “Serbs used flak jackets and helmets to pose as UN members”.

When it was Karadzic’s turn to cross-examine the witness, he addressed the fuel situation in the enclave.

“How did you understand that restriction regarding fuel? Why did that happen?” Karadzic asked.

“The aim of convoy terror, as I call it, was to diminish the capability of Dutchbat,” Franken responded.

“Why would Dutchbat bother us, why would we want to diminish it?” Karadzic asked.

“If the Serbs wanted a solution for the enclaves – for instance an attack neutralising it – it would be in their interest to have [Dutchbat] operational capacities diminished,” the witness replied.

“Why would we be bothered by Dutchbat? Do you think we expected you to fight against us?” Karadzic reiterated.

“Why you do anything, I do not know. I can only say that the logistic situation was [such]… that we were not capable,” Franken said.

Karadzic continued to press the issue, stating that it was in the Bosnian Serbs’ interests for Dutchbat to be equipped, so they could “demilitarise the zone and prevent the 28th Division [of the Bosnian government army] from killing us”.

“That would have been logical, but convoy terror indicates the opposite,” Franken maintained.

Karadzic then asked whether the witness was aware that fuel was being illegally smuggled into the enclave in order to aid what he called the “Muslim army”.

“Why are we speaking of smuggling fuel?” Franken asked. “There is Dutchbat and the civilian population that needs fuel to survive. Why say ‘smuggling’? You did not have the intention of letting them have fuel. I’m pretty firm about not abusing UN convoys into Srebrenica.”

Karadzic claimed that the convoys left the fuel “to our enemies”.

“Do you remember that after each convoy came, the Muslim army was a lot more active in their offensives?” the accused asked.

“We had no reports that there was more activity in their offensives after a UN convoy – being a convoy meant for Dutchbat – came in. That is incorrect,” Franken said.

“Did you get the impression that Muslims of Srebrenica were thinking only about the defence of the enclave or [that they] had active plans targeting Serb territories?” Karadzic asked.

“If you mean Muslims in the normal population, they were concerned with survival. The 28th Division – I know of some attacks they did in Serbian territory, whether they had plans or strategy I don’t know,” Franken said.