Witness tells Karadzic judges he was far away when mass killings took place.

Witness tells Karadzic judges he was far away when mass killings took place. 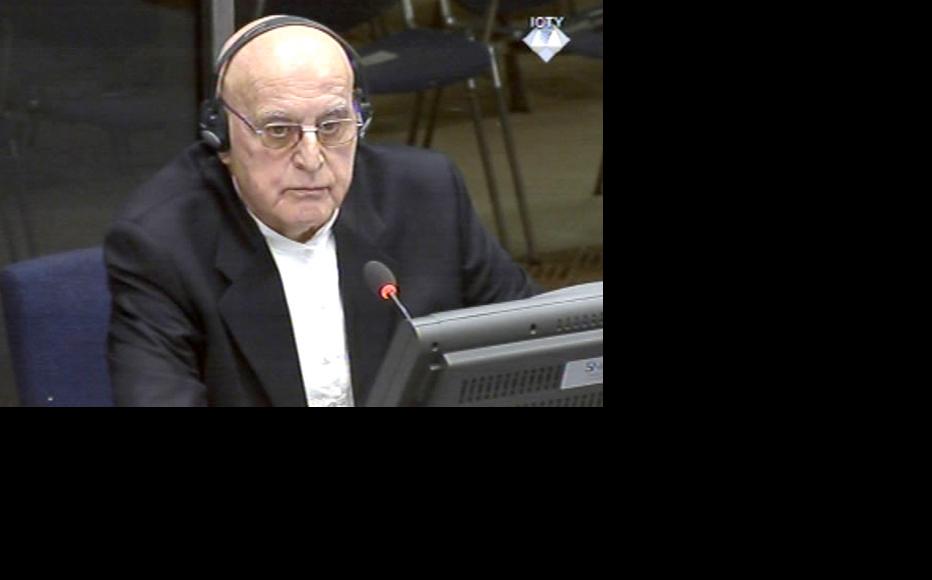 Ljubisa Beara testifing on behalf of wartime Bosnian Serb president Radovan Karadzic at the ICTY. (Photo: ICTY)
The link has been copied

Despite being convicted of genocide, a former Bosnian Serb army officer maintained this week that he had nothing to do with the 1995 Srebrenica massacre.

Ljubisa Beara appeared at the Hague tribunal to testify on behalf of wartime Bosnian Serb president Radovan Karadzic, after being required to do so by a subpoena.

Beara was security chief of the Bosnian Serb army’s main staff in July 1995, and was sentenced to life in prison in 2010 for his role in the Srebrenica massacre. His case is currently on appeal. (See Appeals of Five Srebrenica Officers Heard.)

Karadzic is charged with genocide, extermination and deportation in relation to the killing of more than 7,000 Bosnian Muslim men and boys after the Srebrenica enclave fell to Bosnian Serb forces on July 11, 1995. He represents himself in the courtroom.

Beara originally took the stand in December 2013, and at that time Karadzic asked him a single question – a “Did you inform me either orally or in writing that prisoners from Srebrenica would be, were being or had been executed?”

Beara declined to answer, and said his lawyer had advised him to invoke Rule 90E, which states that a witness “may object to making any statement which might tend to incriminate”. The chamber may still compel the witness to answer the question, but in that case, the testimony compelled in this way cannot be used as evidence in “subsequent prosecution against the witness for any offence other than false testimony”.

Karadzic asked for Beara to be compelled to answer the question, and the judges granted his request.

Beara returned to the tribunal on January 22 to be cross-examined by the prosecution.

Lawyer Melissa Pack read out portions of the 2010 judgement, which stated that Beara had “intent for genocide” and the “determination to kill as many as possible” and had “participated in these killings with the knowledge that they would contribute to the destruction of the group”.

“I don’t accept it at all. It is indeed written, but that’s not what happened at that time,” Beara replied.

The prosecutor once again referred to the judgement, which states that Beara was “at the centre of the killing operation” and responsible for its “planning and implementation”.

“[Judges] said that you translated the murder plan into action…. That is an accurate description of your role, isn’t it?” Pack asked.

“No. I don’t know what you’re asking me. Do you want me to confirm that I orchestrated murders?” Beara retorted.

“You denied all knowledge of crimes perpetrated after the fall of Srebrenica. Is that the position you maintain?” Pack asked.

“I could not have known anything about that at the time, because I was not in the field,” Beara said.

The prosecutor then asked the witness whether he still maintained the “alibi defence” that he was in Belgrade on July 13 and 14, 1995, after the capture of Srebrenica. Beara replied that he did.

“Do you deny that thousands of men were systematically murdered by Bosnian Serb forces after the fall of Srebrenica?” Pack asked.

“How can I deny the horrible things that happened in that civil war, religious war – it is a curse. What happened was horrific, terrifying, but in some magical way it was all pinned on three men from the security service of the [Bosnian Serb army], men who neither had authority or the subordinates who were murderers and prepared to kill,” Beara said.

Pack asked whether the witness would object to the finding that he was “omnipresent” in the area where the many of the killings took place.

“Of course. That’s another mysterious or magical turn that this affair took,” he replied. “The prosecution witnesses who were called to testify to my presence, or the documents presented to the court and admitted into evidence, were of such a nature that it is simply difficult to believe. These witnesses would always see me alone at this execution site staring into the distance, lost in my own thoughts, or they see me walking about and somebody tells them, ‘this is Beara.’”

He went on to claim that the prosecution never brought witnesses who could identify him themselves.

“You only brought the people who recognised me [by] looking at my back. You never brought the person who told the witnesses that they were looking at Beara,” he said. “There was this nurse who provided bandages to tie the hands of people who were being taken to be executed, [and] she said she had seen me at the execution site. But the way she put it, it was the investigator who gave her my name. What she actually said was that she just said she saw a lieutenant-colonel or a colonel. Then she described me in various ways. The investigator said, ‘could it be Beara?’ and she replies ‘yes, it could be.’ That’s one of the cases. There was more of the same kind,” he continued.

After the prosecutor had finished, Karadzic declined to ask Beara any additional questions.