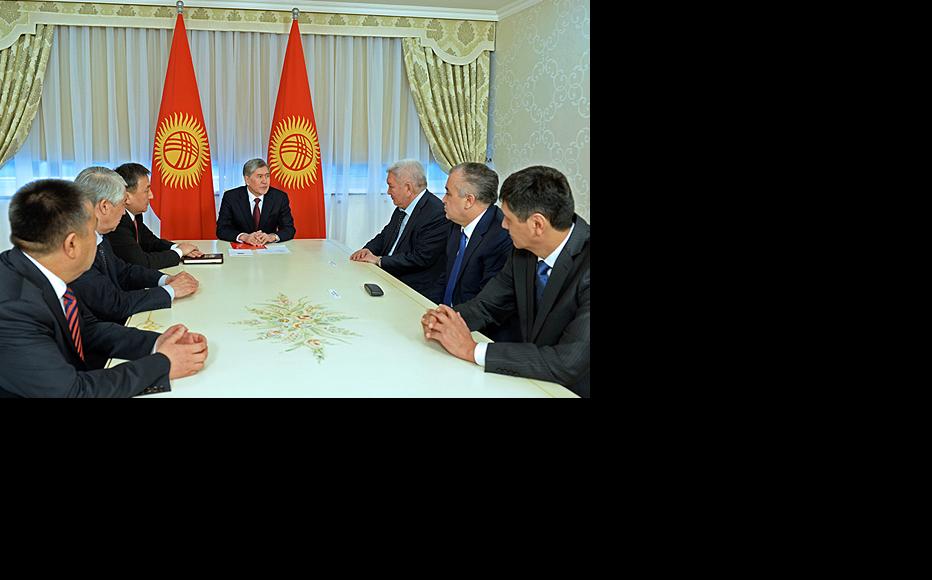 President Almazbek Atambaev meets the speaker of Kyrgyzstan's parliament and leaders of the five main parties. (Photo: Kyrgyz president's press service)
The link has been copied

As Kyrgyzstan heads towards reforms to its constitution, critics point out that the document was completely overhauled just five years ago. They argue that there is no convincing case for the proposed changes, which they believe will benefit senior politicians rather than the nation as a whole.

Draft amendments to the constitution agreed by the heads of five big factions in the Kyrgyz parliament would make changes to the powers and functions of president, prime minister, parliamentary leaders, and the Supreme Court.

If approved by parliament and signed off by President Almazbek Atambayev, the changes will go to a nationwide referendum. It is not clear when parliament will debate them.

In June 2010, a similar referendum approved a new constitution which was seen as revolutionary. Kyrgyzstan became the only country in Central Asia where power was shifted away from the president to the prime minister and parliament. For the first time, the winning party in an election got to nominate a prime minister who could form a cabinet with parliamentary approval.

The reform took place in a time of crisis. That April, President Kurmanbek Bakiev had been ousted in a popular uprising, and earlier in June, there was mass violence involving ethnic Kyrgyz and Uzbeks in the south of the country. Constitutional reform was tried after an earlier revolution in 2005, when long-serving leader Askar Akaev was driven out, but his successor Bakiev derailed it once he consolidated power.

The central idea behind the 2010 constitution was to prevent future presidents building up too much power and turning into immovable autocrats like those in the four other Central Asian states.

The balance of political power is not substantially changed by the proposed changes now under review. Instead, the president gains power in another area, the judiciary. He or she gains the right to select the head and deputy head of the Supreme Court. At the moment, judges in the court elect their chairman themselves.

Critics of the move say this will make the Supreme Court less independent of the executive. But they are just as worried by a plan to shear the Constitutional Chamber away from it. Currently part of the Supreme Court, the chamber can make binding decisions. As a self-standing body, it will have more of an advisory role, and the status of its recommendations is up in the air.

The prime minister will gain two significant new powers – to appoint provincial governors without consulting the relevant regional assembly, and to expel members of parliament, something no one can do at the moment.

TOO SOON FOR CHANGE?

At first sight, these look like minor adjustments that do not upset the systemic changes enshrined in the current constitution.

“In 2010, the constitution was adopted in haste,” Chynybay Tursunbekov, parliamentary leader of the Social Democrats, part of the ruling coalition, told IWPR. “We’ve realised in these five years that there were certain shortcomings that hindered us from moving forward, prevented the government from working, and hampered the judicial reform.”

There is a slight hitch – the current constitution explicitly states that no amendments are to be made to it until 2020. Civil rights activists complain that whenever they suggested improvements in the past, politicians rejected this by citing the moratorium on changes and the need to maintain stability, But Omurbek Tekebaev, the leader of Ata Meken, also part of the ruling bloc faction, says this is not set in stone and “minimal amendments” are possible as long as they go to a referendum.

President Atambaev, who spent his early years in power ruling out changes, now favours the package of amendments. Where he used to repeat the mantra of “constitutional stability” in every speech, his position changed last autumn and he started talking about changes that would deliver judicial reform.

SHAVING OFF POWERS FROM COURTS, LEGISLATORS

Quite how the judiciary will benefit from having its top figures appointed by the head of state has not been explained. Legal experts are particularly concerned about the plan to separate the Constitutional Chamber off from the Supreme Court and substantially weaken it.

The Civic Council for Monitoring the Judicial System, an advocacy group, has written to Atambaev and the Kyrgyz parliament warning that the move will turn the Constitutional Chamber into “the president’s legal department”.

A lawyer who spoke to IWPR on condition of anonymity said politicians were displeased with the current set-up because constitutional judges had made several rulings against the government. In one case, judges stated that only the prosecution service had powers to bring criminal cases and file charges. This was a challenge to the president, who had authorised Kyrgyzstan’s intelligence service, the National Security Committee, to do the same. The Constitutional Chamber also intervened to stop parliament amending welfare expenditure in the government budget.

“The chamber poses a threat to the authorities because sometimes its decisions are not consistent with their current position and expectations,” the lawyer said. “This annoys and scares them because if an ordinary citizen or politician applies to the Constitutional Chamber… and judges deliver a ruling without referring back to the government, its authority will be compromised. So they don’t need this kind of institution.”

Tursunbekov reflects this suspicion of the Constitutional Court, accusing its judges of “failing to take state policy into account” and of “obsessing over laws”.

Another important change being considered is a rule allowing the prime minister to dismiss sitting members of parliament. But what worries experts even more is that political party leaders will be granted the same powers – the right to throw out legislators who do not toe the party line. That seems to undermine the entire basis of parliamentary democracy, turning an elected institution into one controlled by a handful of party bosses.

Since the last election, a number of elected legislators have withdrawn from various political parties, citing policy disagreements. The proposed amendment would see them kicked out despite the popular mandate they won.

In its open letter, the Civic Council for Monitoring the Judicial System warned that the change would “destroy the parliamentary system, make the dictatorship of the faction leader even stronger [and] remove the immunity of legislators, make the president’s and parliament’s influence on the judicial branch stronger,

With all the other changes, it said, the constitutional amendments would “destroy the system of checks and balances; this could lead power being usurped, and it could pave the way for a recurrence of the tragic events [uprisings] of March 2005 and April 2010”.

What is odd about the constitutional reform package is that the leaders of all the main political parties in an often fractious parliament are behind it – the opposition Respublika and Ata Jurt as well as the Social Democrats and their coalition partners Ata Meken and Ar Namys.

Tursunbekov said the package was a joint effort by all five party leaderships, but would not elaborate on who was the driving force behind it.

Many suspect that the real force is Daniyar Narymbaev, the president’s chief of staff. Tursunbekov acknowledged that Narymbaev was taking part in discussions, but denied he was leading the process.

Moldakun Abdyldaev, who represents the president in parliament, denied that Atambaev's office was behind the planned changes. “The [party] faction leaders only consulted with the president’s administration, but it would be wrong the initiative comes from him,” Abdyldaev told legislators.

What is clear that while some parliamentarians back their respective parties’ support for the amendments, others take a dissenting view.

Asiya Sasykbaeva is deputy speaker of parliament and an influential member of Ata Meken, but is totally opposed to changing the constitution, especially at a time when Kyrgyzstan faces more pressing problems.

“What’s the point of these amendments if they don’t allow individuals to better themselves economically? How will these changes help them? Not at all. We should be focusing on the economy at the moment,” she told IWPR. “This is irresponsible behaviour on the part of politicians who have done nothing useful for the country, but want to change the constitution to make their own lives better.”

Many commentators agree with her.

“No one in this country abides by the constitution, especially lawmakers and politicians. I don’t think the adoption of a perfected constitution is going to change that situation,” said Professor Zainidin Kurmanov, a historian and former speaker of parliament.

Tamerlan Ibraimov, director of the Centre for Political and Legal Studies, says allowing politicians to change the rules has dangerous implications.

“There is no perfect constitution in the world. Societies in advanced democracies try to live by their constitutions by moulding their own political behaviours to the requirements of the basic law. In this country, by contrast, we do things differently – the moment our political views come into conflict with the constitution, political forces immediately try to change the law,” he said. “This is quite a dangerous tendency because we’re constantly undermining the constitutional system; we’re always trying to move the goalposts to benefit narrow political groups.”

Elmira Nogoibaeva, director of the Polis Asia Analysis Centre, is also sceptical of the use referenda to push through same, since voters have little knowledge of legal language and will be easily swayed by a government information campaign in support of change.

“The proposed mechanism for these amendments – a referendum – is increasingly used as a tool for manipulation by authoritarian regimes, and for strengthening the vertical hierarchy of power,” she told IWPR. “If top state figures, officials and bureaucrats… stop observing and complying with the constitution, then ordinary people will do the same. That’s a frightening scenario, since people will stop respecting the law and will turn instead to other standards – tradition, customs, [Islamic] sharia law, and the laws of the underworld. They won’t live by the same laws any more…. We need to have common rules. We need equal rules for everyone.”

Kyrgyzstan
Accountability, Rule of Law
Connect with us