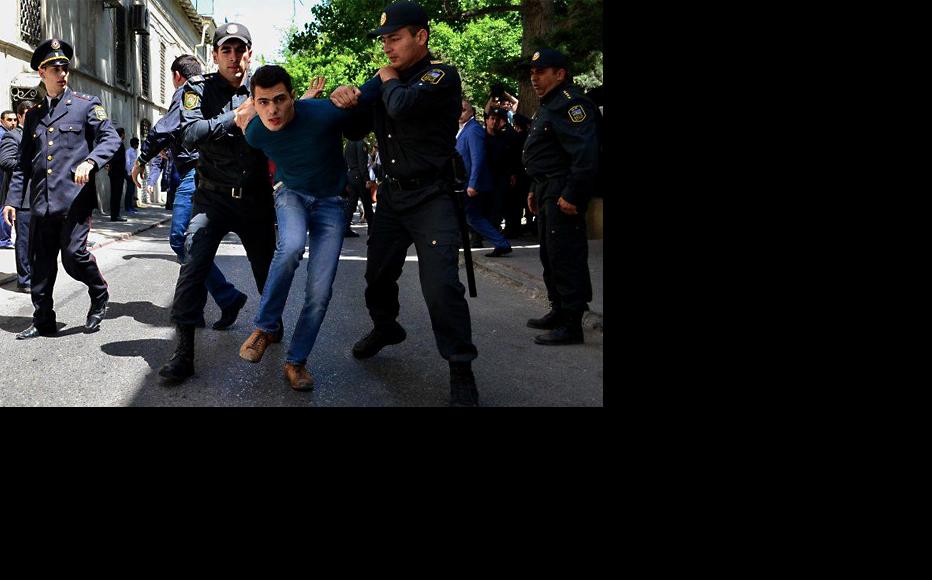 A protester is arrested outside the courtroom after eight youth activists were convicted on May 6. (Photo: Javid Gurbanov/Bizim Yol) 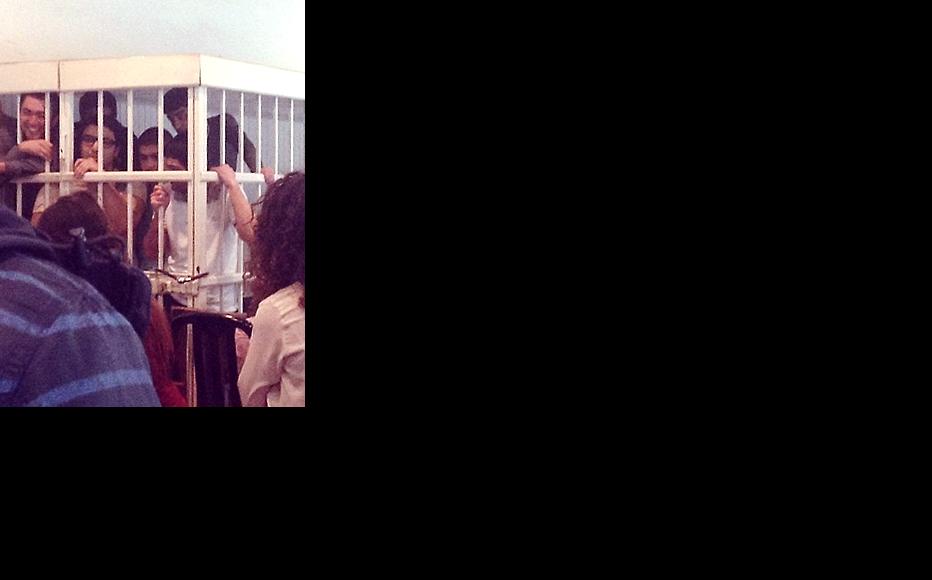 The NIDA defendants in a cage in the courtroom. (Photo courtesy of NIDA)
The link has been copied

The long prison sentences handed down to eight young activists in Azerbaijan have been roundly condemned by the United States embassy and international rights groups.

In a hearing on May 6, a judge sentenced Zaur Qurbanli, Ilkin Rustamzade and Rashadat Akhundov to eight years in prison, Mammad Azizov and Rashad Hasanov to seven-and-a-half years, Bakhtiyar Guliyev and Uzeyir Mammadli to seven years each, and Shahin Novruzlu to six years.

He accepted the prosecution case that the eight defendants, all from the youth group NIDA, had stored Molotov cocktails and were planning to stage an armed uprising financed from abroad – accusations the activists said were entirely fictitious.

They were arrested in March 2013 soon after NIDA was involved in street protests about a series of deaths of army conscripts.

The defendants announced they were ending a hunger strike which they had kept up for 20 days. (See Detained Azeri Youth Activists on Hunger Strike.)

“Our aim was always to use peaceful and legal means to fight dictatorship. Our aim was to inspire the silent parts of Azerbaijan, to bring new groups to the protest, and to draw the attention of international democratic forces away from geopolitical issues and towards repression in this country,” a statement issued by the group said. “The government did not meet our demands, but we achieved our aims and showed that they could not stop our fight by arresting us.”

The US embassy issued a statement saying the sentences were based on “highly questionable” charges.

“We observed numerous irregularities, including inconsistencies in witness testimonies. We also heard accounts of authorities’ mishandling of evidence and disregard for legal search procedures,” the statement said. “We again urge the Azerbaijani government to live up to its international human rights commitments, particularly in light of Azerbaijan’s upcoming chairmanship of the Council of Europe Committee of Ministers.”

Human Rights Watch and Amnesty International were among the international watchdogs to express similar condemnation of the trial process and its outcome. Denis Krivosheev, deputy director of Amnesty’s Europe and Central Asia programme, called the verdict “an affront to human rights and a timely reminder of Azerbaijan’s continued refusal to respect basic freedoms”.

Akhundov’s mother Matanat told IWPR, “History will not forgive this injustice. They know that they have stolen seven or eight years from these innocent young men. I hope that one day, they have to go through what we parents have lived through…. They introduced false witnesses and a fictitious narrative. And then, on the government’s instructions, they stole these young lads’ youth.”

Supporters of the defendants gathered near the courthouse as the verdict and sentences were being heard, but police quickly moved in dispersed them when they began to protest. One young woman lost consciousness after being hit with a police baton and dozens of others were injured.

Four journalists were among the 26 people detained, most of whom were fined between 100 and 600 manats (130-770 US dollars) and then released. Five were jailed for between 15 and 30 days.

Isa Gambar, a veteran opposition politician who heads the Musavat party, told Mediaforum that the case was a sign of weakness, not strength, on the part of the government.

“This government has wallowed in criminality. Lawlessness rules this country, together with bribe-taking and total injustice towards ordinary people,” he said. “The government is scared of any protest, of any sign of dissatisfaction. It is particularly concerned when young people are active and self-confident. And that’s why it launched this savage repression against the leading youth groups in Azerbaijan.”

Siyavush Novruzov, deputy head of the governing Yeni Azerbaijan party, defended the trial process, without addressing the specific concerns raised by the US embassy and others.

“There was an investigation, and a transparent court process took place for everyone to see. The young people had lawyers. As far as I know, they even had a chance to speak for themselves,” he told IWPR.

One day before sentencing took place, a separate case concluded favourably for a former member of parliament from Yeni Azerbaijan party convicted of corruption last year.

At the May 5 appeals hearing, judges allowed Gular Ahmadova out on conditional release. In December, she was sentenced to three years in jail after being filmed arranging the sale of a parliamentary seat. (See Conviction in Cash-for-Seats Trial on what looked at the time like a rare case of a leading regime supporter being held to account.)

Ahmadova’s lawyers now plan to appeal before Azerbaijan’s Supreme Court and get her conviction quashed completely.

Commenting on the case, Gambar said the contrast between Ahmadova’s case and the verdicts passed in the NIDA trial was all one really needed to know about the government’s approach.

Sevinj Telmanqizi reports for the Yeni Musavat newspaper in Azerbaijan.