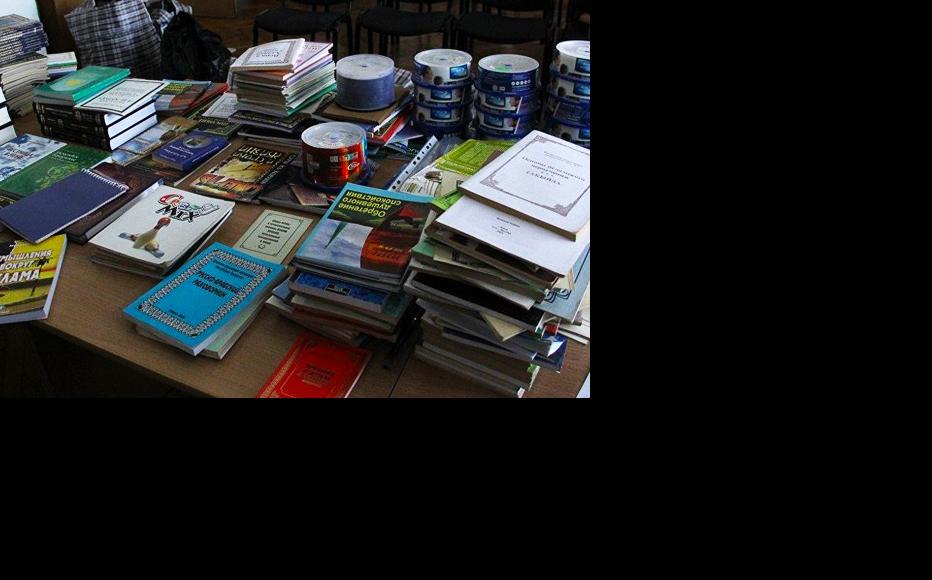 Extremist material confiscated by the ministry of internal affairs. (Photo: Kyrgyz Ministry of Internal Affairs)
The link has been copied

Concerns are rising over Kyrgyzstan’s heavy-handed approach to prosecuting individuals over the possession of supposedly extremist material.

A new report by Human Rights Watch (HRW) claims that such criminal cases often serves as part of a more general policy of repression under the guise of combatting Islamist extremism.

Article 299-2 of the Kyrgyz criminal code, the most widely applied charge in relation to the possession of extremist material, carries a sentence of between three and ten years in prison even if there is no incitement to violence or distribution.

The HRW report estimates that more than 250 people have been convicted under this article since 2010. Several hundred more are awaiting trial.

“Kyrgyzstan should prosecute people for committing or plotting violence, but not for the videos they watch or the books they read,” said Letta Tayler, HRW senior terrorism and counterterrorism researcher. “Outlawing mere possession of material vaguely defined as extremist makes it all too easy to unjustly target political opponents, activists, journalists, defence lawyers, and ordinary citizens.”

A major point of concern is just who is tasked with categorising material as extremist.

“The determination of whether material is or is not extremist is made by the State Commission for Religious Affairs (GKDR), a government panel that human rights defenders have criticised for insufficient expertise and impartiality,” the report said. “The government has pledged to transfer reviews of material for extremist content to its forensic service but at time of writing had yet to do so.”

Kyrgyz lawyer Zhanabil Davletbaev analysed all the trials that took place under article 299-2 last year. His conclusion was that the courts usually relied on the state’s examination when their delivering judgements.

“This is the main evidence the sentence is based on.  But the quality of examination by the State Commission for Religious Affairs raises many questions. Often it is done as a mere formality,” he said.

HRW included testimonials from people who said that “police and security agents had planted the material during searches, then demanded payoffs to end investigations. Some said law enforcement officials tortured them to extract confessions”.

The rights group also noted that “not only are abusive counterterrorism measures unlawful, they also can be counterproductive by alienating local communities and generating support for extremist armed groups”.

Davletbaev, who specialises in monitoring trials related to extremism, highlighted some bizarre cases he had observed in the last two years.

In one, a man was convicted for extremism because police discovered that he had listened to a voice message sent to him via WhatsApp.

“The nonsense was that the investigators didn’t even want to know who sent this suspicious file. They wrote that the sender was unknown,” the lawyer said.

In another case, a man was convicted for having some words in Arabic written in his notebook, separated by commas. Read together, the collection of nouns had no meaning. But the examination board wrote an opinion that these words were often used by prohibited extremist organisations.

“Do you understand that the State Commission for Religious Affairs neither reveals hate speech nor sees context?” Davletbaev continued. “If any given word can be interpreted as participation in extremism and anyone can receive a prison term for ‘distribution,’ then everyone’s at risk. We are all at risk every time we read specialised literature, take part in discussions on social media, or write comments,” he warned.

Valerian Vakhitov, another lawyer who works in the south of the country, has monitored almost 100 criminal cases involving article 299-2, together with the Bir Duino human rights organisation. He said that once a charge was made, it was inevitable that the accused would be found guilty.

“No non-guilty verdict has been rendered in Kyrgyzstan under the article concerning ‘nationalist, racial, or religious hatred,’” Vakhitov said. “If a case is filed, you will be convicted. For a [social media] ‘like’, for a pamphlet an imam hands to you and you don’t even have time to open: our law enforcement bodies do not care.”

People convicted of such a crime were unable to apply for parole or early release and were effectively marked for life, he continued. The main criteria for convictions was the GKDR examination.

Vakhitov noted the case of Rashod Kamalov, an imam from Kara Suu in Osh oblast who was sentenced to ten years hard labour in October 2015 over a CD recording he had played during Friday prayers. But Vakhitov said that this was a pre-recorded sermon that GKNB investigators had already examined and deemed acceptable.

The lawyer recalled another high-profile case in 2016 when Abdullo Nurmatov , a 21-year-old Kara Suu resident, was put on probation for liking posts about Kamalov on the Odnoklassniki social media site.

“You might just as well impose a term on law enforcement officers and judges who keep the seized literature in their offices,” he continued. “Such charges should be based on the main thing – wilful intent. Possession can be accidental - someone was asked to keep it for a while - for professional study, for writing an article, for research purposes. The courts should find out why a person possesses such material and what he plans to do with it,” Vakhitov said.

GKDR deputy head Zakir Chotaev told CABAR.asia that most of the material his office was asked to examine was found not to be problematic and so did not make it to the prosecution stage.

“The majority of the material has been cleared,” he said.

“All we do is the state religion expert examination, which can be done by any expert who has relevant knowledge. We define whether materials refer to banned movements and organisations or not,” he said, stressing that their report was just part of the evidence presented as part of a trial, and not intended to be definitive.

“It can be provided only upon request of government agencies. And then it’s up to courts. Only a court can decide whether our expert examination can be used as an evidence or not.”

Indira Islanova, an expert on religion and a government consultant, agreed that a more “comprehensive” approach to assessing sensitive material was key.

“For example, it’s for linguists to determine whether materials contain propaganda and calls to violence. They have clear methods of determining this. Religion experts should be involved in the interpretation of religious terms and texts. Psychologists should be the ones to examine audio and video files. If calls to interethnic strife are suspected, sociologists and political analysts could be involved.”

Aslanova, one of the authors of a forthcoming methodological guide on how to assess extremist content, said that she saw positive changes ahead.  This standard procedure for commissioning an expert examination would take about three years to implement. After that, the GKDR would no longer be involved in the process.

In addition, Article 299-2 will be amended in January 2019 as part of wider changes to the Kyrgyz criminal code.

The categories of “possession of extremist materials” and “possession for the purpose of distribution” will finally be separated.

“I hope so much that we will eliminate the gap [between possession and the intent to distribute problematic material,” she said. “Otherwise, we all will depend on judgement of law enforcement bodies.”

Maria Zozulya is a IWPR-trained journalist in Bishkek.

Kyrgyzstan
Human rights
Connect with us