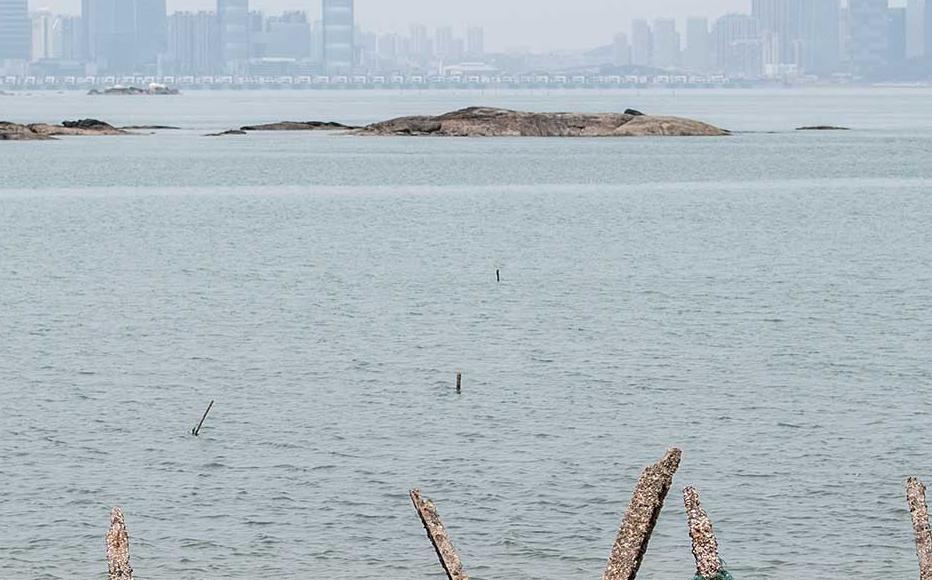 Aged anti-landing barricades are positioned on a beach facing China on the Taiwanese island of Little Kinmen which, at points lies only a few miles from China. © Carl Court/Getty Images

Could Beijing's growing belligerence be a preparation for war?

Aged anti-landing barricades are positioned on a beach facing China on the Taiwanese island of Little Kinmen which, at points lies only a few miles from China. © Carl Court/Getty Images
The link has been copied

China frames the Taiwan dispute in bracingly nationalistic terms to its own people: secessionists are plotting with foreigners to divide the motherland permanently and Beijing will do whatever is necessary to defend national unity.

This month, it underlined the message by sending dozens of fighter jets and bombers screaming into airspace south-west of the island.

"It has never ended well for those who forget their ancestors, betray the motherland, or split the country," said the Chinese leader, Xi Jinping, following a week of military posturing.

The world may see an independent, prosperous and democratic island of 23 million people being bullied by a neighbouring superpower. But the Chinese Communist Party (CCP) insists Taiwan is an intrinsic part of national territory.

Taiwan's defence minister, Chiu kuo-cheng has said that relations are at their worst for 40 years and Beijing would be fully prepared for an invasion in just four years.

The difficulty for Taiwan, the US and their allies lies in distinguishing China's propaganda and bluster from its true strategic intentions.

There's alarm in some world capitals that Beijing's growing belligerence could be a preparation for war, but analysts tend to see its actions more as a warning and an attempt to set red lines over the confrontation.

China was humiliated in 1996 when the United States sent two aircraft carrier strike groups to Taiwanese waters to face it down over missile threats to the island.

The People's Liberation Army learned its lesson and is now equipped with ballistic and cruise missiles designed to keep the US navy well away in the event of conflict.

The fear is that China now sees a window of opportunity for an invasion, one that will close in the coming years as Washington rebalances its forces in the Pacific and seeks to neutralise Chinese gains.

The difficulty for Taiwan, the US and their allies lies in distinguishing China's propaganda and bluster from its true strategic intentions.

Xi Jinping knows that launching an untested army, air force and navy into such a perilous operation would carry untold risks, even if without potential conflict with the world's dominant military and nuclear power.

Most China watchers see this month's sabre rattling as an escalation of grey zone tactics, whereby China attempts to demoralise the Taiwan population and stress the inevitability of Chinese dominance.

She and others point out that the Chinese warplanes did not enter Taiwanese airspace or violate the median line in the Taiwan strait, confining their activities to an area inside the island's sprawling air identification zone and over a corridor used by American forces for entering the contested South China Sea.

It is also considered significant that Xi Jinping referred to his wish for "peaceful reunification" in a speech this month, an indication that he has not given up hope of political progress with Taiwan despite the defiance of its current government.

"It is still seen largely seen as a political problem left over from the civil war," said veteran China analyst Bonnie Glaser, at a recent forum. "The option of force will be left on the table but will only be used as a last resort."

The immediate worry for Beijing appears to be the growing confidence of the Democratic Progressive Party administration in Taipei and its closer relations with the US.

"The US is instigating the DPP authority to provoke, continuously sending signals that Washington will offer support.... but political hooligan tactics cannot work with the Chinese mainland," according to a recent column in China's nationalistic Global Times.

Beijing may suspect backsliding, but President Tsai Ing-wen has made clear she has no intention of challenging the status quo with moves towards a formal declaration of independence.

The Biden administration has deepened ties with Taiwan and increased military supplies and cooperation, including the despatch of a small number of marines and special forces for training purposes. Washington has also declared its commitment to Taiwan as "rock solid".

But there is no indication of any wish in the White House to change Taiwan's unofficial status or move to formal recognition of the government in Taipei.

China's stated fears of secession may amount to something of a straw man, a convenient excuse to pander to nationalistic passions at home and to send a signal  that the stakes are rising over Taiwan.

Concerns have been expressed that an economic or political crisis on the mainland could be a catalyst for a reckless military move on Taiwan.

Current alarm over the troubles of the property developer Evergrande, and potentially vast losses in the sector as a whole, have stoked such fears.

The scale of Xi Jinping's ambition and the ruthlessness of his actions in recent years have startled many observers. But he continues to frame unification with Taiwan more as a long term political goal rather than as an urgent short term objective.

He has stated that unification is an essential component of his strategic aim of national rejuvenation, but the target year is put at 2049, 100 years after the CCP seized power.

A more pressing danger is the prospect of Taiwan being drawn into the broader strategic confrontation between China and the US in the western Pacific.

During the decades of engagement after President Nixon's visit in 1972, China and the US managed the Taiwan problem with a slew of arcane verbal formulations and deliberate ambiguities.

Beijing's "one China principle" meant that Taiwan could never be an independent, sovereign state; Washington's "one China policy" meant recognition of Beijing, unofficial status for Taiwan and a less than ironclad security guarantee. Taiwan meanwhile agreed to forego formal independence and content itself with the title of the defunct Republic of China.

Verbal gymnastics will only go so far if Beijing decides Taiwan is being used by Washington to contain its rise as a great power.

"A democratic Taiwan serves as a sea fortress to block China's expansionism into the wider Pacific," said Taiwan's foreign minister, Joseph Wu, in a recent address to analysts.

Such talk is seen as highly provocative in Beijing, which feels national defence is constrained by the "first island chain" of American allies - from Japan through its Okinawan islands to Taiwan and the Philippines.

Every step by the US and Taiwan to deepen their ties is seen as a threat by Beijing.

"Salami-slicing efforts by the US to change the status quo, as China likes to call them, make it hard for Beijing to respond proportionally and effectively in terms of its objectives," noted Hsiao.

China's muscle flexing may appear counter-productive, but it calculates that Americans won't be prepared to die for Taiwan and Washington will eventually back off.

Biden and Xi Jinping have agreed to hold a virtual meeting before the end of the year and Taiwan is sure to be high on the agenda. The best hope is that they agree a new arrangement or formula to preserve the status quo over Taiwan, even in the face of an ever-worsening security environment.