Unregistered children are denied citizenship, leaving them with no right to basic services.

Unregistered children are denied citizenship, leaving them with no right to basic services. 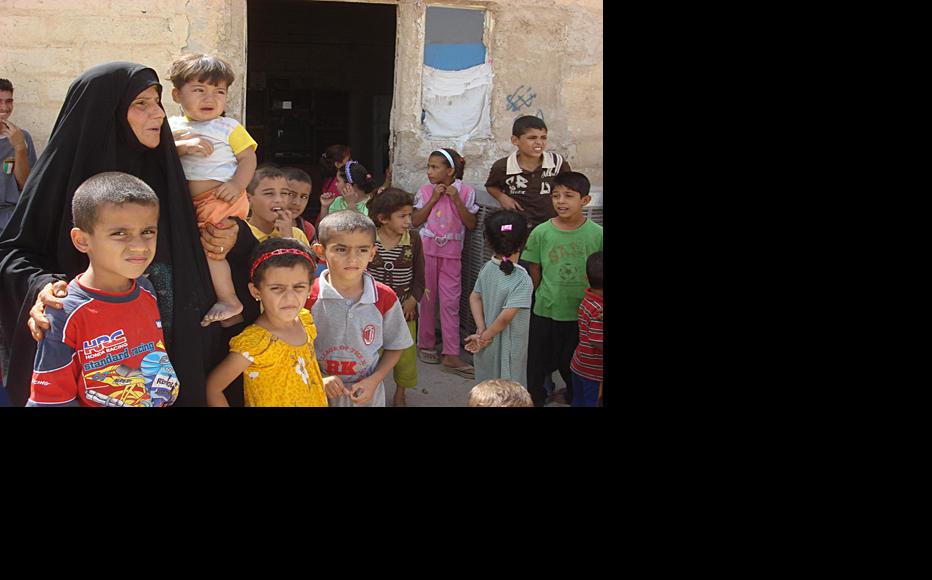 The children of deceased insurgent fighters gather at the Malak al-Rahma (Angel of Mercy) NGO in Diyala. (Photo: Ali Mohammed)
The link has been copied

The widows of insurgent fighters in Diyala province are demanding that the government acknowledge the hundreds of children whose fathers died leaving them without Iraqi citizenship.

During the worst years of sectarian violence between 2006 and 2008, many men who joined militant groups such as al-Qaeda hid their true names and tribal links from the authorities - and even their future wives. As a result, these marriages are invalid under Iraqi law, meaning their children cannot be registered and are denied state education, healthcare, food allocations and voting rights.

Activists are calling on the Iraqi government to intervene in what they believe is a human rights issue that has the potential to shut innocent Iraqis outside the country's administrative system.

“This is a problem that deserves the highest level of attention from government, ministries, legislators and even the Marjaiya (the highest Shia religious body). I agree it is not an easy problem, but it does deserve a solution. Being the child of a terrorist is not the child’s fault,” Hanaa Edward, a women’s rights activist and head of the Amal NGO, said.

Aeisha, 34, tells a story typical among the widows of insurgents in Diyala.

“In 2006, I was single, but my brother who was an al-Qaeda fighter arranged a marriage for me to one of his friends,” she said. “My marriage was not registered in court because the witnesses and the sheikh were all al-Qaeda members. I lived with him as his wife for two years until he was killed in a battle with security forces in 2008. I had two sons with my late husband.”

According to Islam, a marriage is valid if it is overseen by a cleric and witnesses. Aeisha, however, can’t locate the former who performed her ceremony and the latter, along with her brother, have all been killed.

“My current problem is that I can’t prove that I was married, or prove my sons’ lineage. The government considers them illegitimate and local officials refuse to grant them citizenship,” said Aeisha, who declined to give her full name because she feared for her life.

By law, all Iraqi children must have a birth certificate and, later, an identification card that establishes citizenship. Without these documents, which require the parents’ IDs and marriage contract, the child forfeits the right to basic services, including education and hospital treatment.

Officials in Diyala confirmed they are unable to grant citizenship to the children of unknown fathers, but said they are only following procedure, while a source at the ministry of education confirmed that no child can be enrolled in any public school without proper paperwork. Such circumstances have left some mothers in Diyala to wonder what kind of future awaits their undocumented children.

“I am the mother of two boys and a girl and none of them are registered with the authorities,” said Sanaa Omar al-Obaidi, 26. “Even if their father was a wanted man, is it their fault? My children are Iraqi; don’t they have the right to Iraqi citizenship? They will be mistreated and kept out of school for nothing.”

Soaad Hammodi, head of the Diyala branch of the Malak al-Rahma (Angel of Mercy) NGO, said his organisation has so far found 428 children in the province who have been denied citizenship because their fathers joined anti-government forces.

Hammodi estimated that there are more than 900 additional children in the province in similar circumstances, with numbers even higher in Anbar, Mosul and Samara where al-Qaeda and other militant groups were also active.

“This problem is only getting bigger,” Hammodi said.

Government officials in Diyala said they had no choice but to follow regulations. There is concern among some civil servants that the province’s resources, already stretched thin by other social concerns, will be further depleted by fraudulent citizenship claims. Hussein al-Tememi, a 68-year-old judge in Diyala province’s Baquba court, explained that if a marriage is not registered and no legal contract exists, the only way the situation can be fixed is for the undocumented spouses to appear in court and swear on the Quran that they are married.

“As judges we have laws and regulations that we are committed to,” he said. “The problem with these women now is that they have nothing to prove that there was a marriage at all; no husband, no witnesses. These women don’t even know the real name of their husband. How can their children be recognised by the state? This is a new problem that Iraqi courts have never faced before,” Tememi added.

Human rights advocates acknowledge that the issue is complex. Jenan Mubarak, head of the Iraqi Centre for Women's Rehabilitation and Employment, said that many widows of insurgents are reluctant to come forward for fear of linking their families to terrorists, while others are simply stricken with shame.

Mubarak and Edward both suggested that the government work with clerics, tribal leaders and civil society to search for solutions.

“Will we keep silent to see these little kids grow up outside the law to become criminals one day? I can’t believe the government is doing nothing to solve these children’s problem,” Edward said.

As for Obaidi and her three undocumented children, she sees the past possibly repeating itself.

“I have to wonder about the fate of my children,” she said. “Will the government admit that they have a right to Iraqi citizenship, or will they face the same fate as their father – being deceived by the government and being forced to join an armed group?”

Ali Mohammed is an IWPR-trained journalist.