Chaotic Routes Out of East Ukraine

Some manage to travel freely, while others run the gauntlet through checkpoints and crossfire.

Chaotic Routes Out of East Ukraine

Some manage to travel freely, while others run the gauntlet through checkpoints and crossfire. 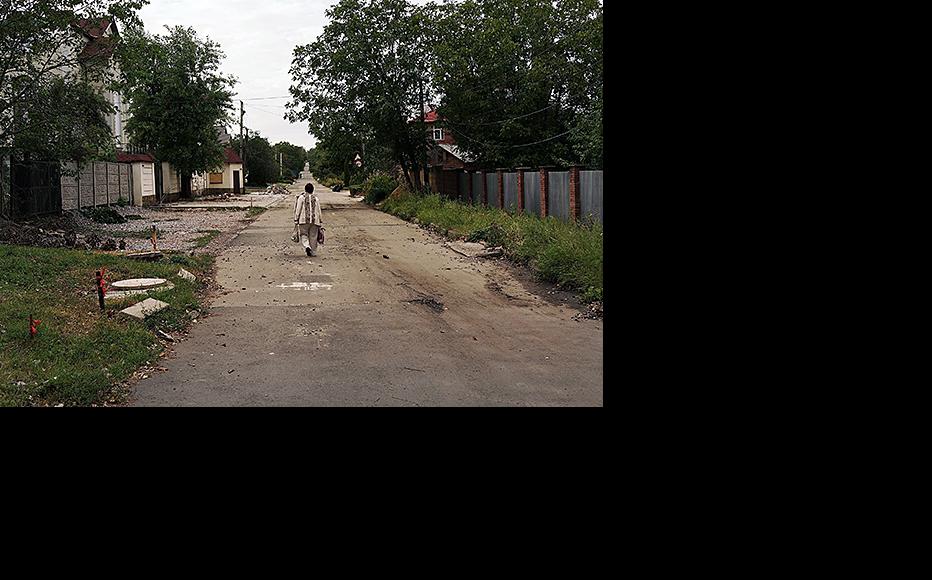 A woman walks through Donetsk, many residents of which have now left. Picture taken September 11, 2014. (Photo: Spencer Platt/Getty Images)
The link has been copied

As a fragile ceasefire continues in eastern Ukraine, many residents are still making plans to leave. Those who have made it out describe a tense and uncertain atmosphere in which armed militias operate with impunity.

According to United Nations figures, at least 367,000 people have left Ukraine since hostilities began, with 326,000 going to Russia and the rest to Europe or the United States. A further 310,000 have been displaced within Ukraine.

About five million people still live in areas controlled by the Donetsk People’s Republic (DPR), and the chaotic situation means that some people manage to reach Kiev and other parts of Ukraine by car or even public transport, while others risk harassment and detention along the way.

“I went by bus from Donetsk to Dmytriv, which is under Ukrainian army control,” Yehor Nesterov, a 31-year-old lawyer, said. “Our driver took a route on which we didn’t encounter any DPR roadblocks at all.”

Some drivers now specialise in ferrying people out of the region and navigating the rebel checkpoints along the way.

“It’s possible to leave by taxi,” Ihor Hulay, 22, a maths teacher from Amvrosievka, told IWPR, explaining that the drivers had come to special arrangements with the insurgents. “For a ten or 15 minute ride, the taxi driver wants at least 200 hryvnia [15 US dollars]. You could travel across Ukraine for that money.”

Travelling through disputed territory carries the risk of coming under fire from either side.

“We’ve had passport checks at [DPR] roadblocks, but nobody threatened us with weapons,” Valeria, a 25-year-old book-keeper who still works at a supermarket in the town of Makeyevka, said. “But you have to remain there a long time while they check you, and in the meantime the Ukrainian army might fire at the roadblock.”

Amid the uncertainty, rumours circulate freely. Some locals accuse the rebels of seizing young people fleeing the conflict zone and forcing them to join the pro-Russia forces, while others say the fighters only allow people to travel to Russia.

“It’s dangerous to leave the DPR for Ukraine,” Hulay said. “One of my friends was captured by DPR fighters at a roadblock, and now they’re holding him to ransom.”

According to Grigory, a retired 50-year-old supporter of the rebel movement, “When anyone says the DPR is preventing them leaving for Ukraine, it’s a lie; it’s Ukrainian propaganda.”

He added, “All my acquaintances prefer to go Russia.”

Others say the pro-Russia rebels are trying to pressure people – particularly the more affluent – to stay, as a way of demonstrating that life goes on as normal.

“I’d agree partially that the DPR fighters won’t let people leave for Ukraine, but that’s also the case for Russia,” Anton, 29, assistant manager at a Donetsk supermarket, said. “They want people who have property to stay on here. If you have a business trip, OK, but if you are going to leave the DPR forever, you’ll have a lot of problems. They will make a full check of your car, asking about everything you have with you.”

As a result, Anton said, some people who are leaving for good “leave everything behind and travel with a small amount of luggage”.

Many say they have little choice but to go. Vostok SOS, a Kiev-based volunteer group helping those who have fled the fighting, showed IWPR the testimony of one individual which it said illustrated the arbitrary nature of separatist rule.

“On the night of July 13, fighters wearing camouflage and armed with automatic rifles burst into our apartment, carried off my husband without any explanations, and stole our laptop, photo and video cameras,” Olga, a 37-year-old nurse, wrote. “I was on my night shift at the hospital. My three children were at home and the fighters kidnapped their father before their very eyes, leaving them alone at two in the morning.

“Then came the most horrific period of my life – threats from separatists, uncertainty about my husband and constant questions from my children, ‘Mum, did those guys with automatic rifles kill our father?’ I was in despair, and realised we had to leave town immediately. We didn’t even have the money for tickets.”

After Olga contacted Vostok SOS, the group helped her escape to Lviv in western Ukraine, from where she is still trying to discover the whereabouts of her husband.

Alyona Matvyichuk, a 25-year-old personnel manager now living in western Ukraine, recalled how an acquaintance was arrested in the street.

“It was the so-called Donetsk Prosecutor's Office, which considers itself to have law-enforcement powers,” she told IWPR. “Arrests are carried out like this – they seize you, put a black sack over your head, tie your hands and drag you away for interrogation.”

Matvyichuk said the situation in Donetsk remained extremely dangerous, especially for those who did not support the separatists.

“I don’t want to die from a stray bullet or shell like some of my friends have,” she said, explaining why she left. “There’s a hostile and unpleasant mood in the city. I don't see any positive prospects for Donetsk. My company has hardly any clients left there, so it made no sense to work in the city.”

“Armed fighters were constantly going past our house,” she continued. “Pictures of my friends were posted up near the occupied government offices with the inscription ‘Enemies of the DPR’. I don’t even want to think what would happen if they were captured.”

Others say it is the general chaos and the breakdown of public services that will eventually force them to go.

“I will stay if [stability] comes, but not the anarchy we have now,” said supermarket manager Anton. “All entrepreneurs are in danger of losing their goods whenever they pass through a DPR roadblock. As long as this robbery goes on, the region will continue to die. Then I will have to leave.”

In the town of Amvrosievka, maths teacher Hulay wants to leave because he has given up hope of receiving his salary.

“There’s no shooting in the town and I don’t feel that I’m under any threat at this point, but people try not to go out after 8pm. What worries me most is that there are no police, no ambulances, no emergency services. If anything happens, the state won’t help you. My wife is pregnant.”

In Makeyevka, Valeria is getting paid and she plans to stay where she is.

“I’ve decided to stay here in Makeyevka because our supermarket is doing good business,” she said. “For economic reasons, it makes more sense to remain. I will stay here as long as my wages are paid and I can buy everything I need.”