In Central Asia, Caution and Concern on Ukraine

While local leaders do not want to go against Moscow, the spectacle of Russian troops entering a former Soviet state is unsettling.

In Central Asia, Caution and Concern on Ukraine

While local leaders do not want to go against Moscow, the spectacle of Russian troops entering a former Soviet state is unsettling. 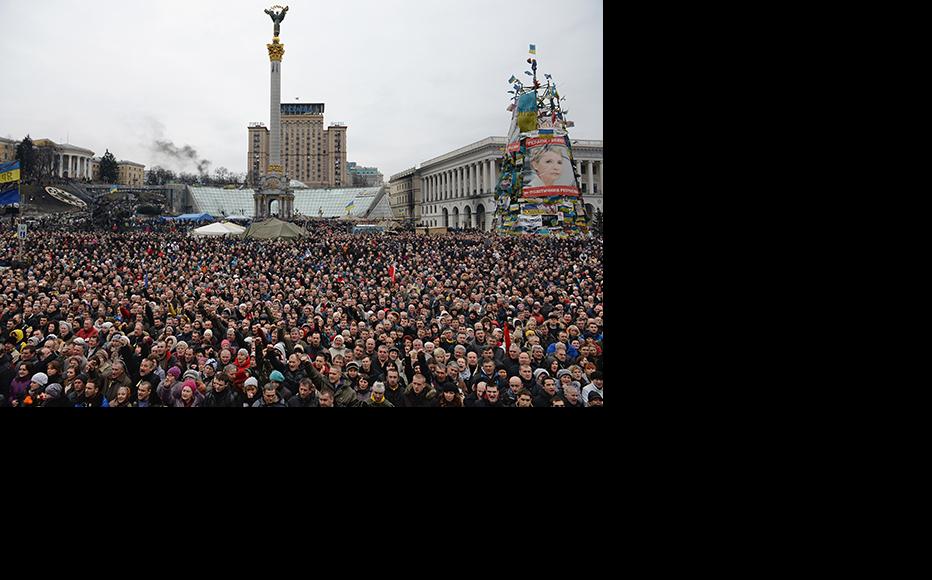 While the popular uprising in Ukraine may make authoritarian leaderships in Central Asia nervous, the Russian military intervention in Crimea is no less of a worry for them.

As months of confrontation between anti-government protesters and police escalated into clashes in Kiev last month, and President Viktor Yanukovich fled the country, the initial reaction was a cautious silence from leaders in Kazakstan, Tajikistan and Uzbekistan, and a resounding one from Turkmenistan. Presidents in this region may have identified with Yanukovich, and would certainly not wish to offend Moscow in any way. But at the same time, they did not wish to alienate a new Ukrainian leadership with which they might want to do business.

The only swift reaction came from Kyrgyzstan, the sole Central Asia state to undergo leadership changes resulting from popular uprisings. In the Kyrgyz case, this happened not once but twice, in 2005 and 2010.

President Almazbek Atambaev expressed his condolences to the families of those killed in Kiev, and said he understood the challenges that Ukraine’s people would need to overcome “on the road to true democracy and people-power”.

Central Asian diplomacy shifted up a gear after the deployment of Russian troops across Crimea and the decision to hold a swift referendum on reassigning the peninsula from Ukrainian to Russian sovereignty.

In a carefully-worded statement, the Uzbek government avoided direct references to Russia but expressed concern at developments that it feared might lead to “a greater escalation of tensions” and to “a threat to the sovereignty and territorial integrity” of Ukraine. Kazakstan’s foreign ministry issued a similar warning against the use of force and called on all sides “to refrain from actions that could provoke a further deterioration in the crisis in Ukraine”.

All the Central Asian states – Kazakstan in particular – still have Russian populations, despite substantial emigration since the Soviet collapse of 1991. The risk of Russia taking robust action to protect its brethren in Central Asia may be remote, but events in Crimea may have caused some regional leaders to consider the possibility for the first time in a long while.

Matters were not helped when Vladimir Zhirinovsky, the nationalist who leads the Liberal Democratic Party, announced on February 23 that he felt the Central Asian states needed to be brought back under Russian control in some kind of federative arrangement.

As Central Asian governments fine-tuned their diplomatic responses to the unfolding crisis, their populations were also watching events in Ukraine closely. Attitudes were coloured by people’s political alignment and to an extent by ethnicity. Those with a more nationalist outlook or pro-Western views tended to sympathise with the Ukrainians, whereas people with Russian as their mother tongue or who were strongly influenced by the Moscow media went the other way.

In Kyrgyzstan, political analyst Pavel Dyatlenko said the ruling elite was worried about Moscow’s actions in Crimea. It was not so much fear of a similar military intervention as a more general concern about Russia’s willingness to rough up its former Soviet neighbours.

“It comes down to a small country’s worries about a big confrontation taking place in the post-Soviet space,” Dyatlenko said.

Chynybay Tursunbekov, leader of the country’s governing Social Democratic Party, said he was on the side of the Ukrainian people.

Kyrgyzstan had learned lessons from its two revolutions, he said, not least that its presidents must not allow their children to get involved in politics or shady business dealings.

Opposition politician Omurbek Abdrahmanov agreed that the Ukrainian uprising was a “positive process” as people chose between “the democratic Western world and the authoritarian countries to the east”.

Although the Ar Namys party is in coalition with Tursunbekov’s Social Democrats, it has traditionally taken a more pro-Moscow line. On this occasion, too, leading Ar Namys politician Tursunbay Bakir-Uulu, condemned the Ukrainian unrest which he said was funded by Western governments.

Bakir-Uuly was among those behind a failed bill intended to restrict foreign funding for civil society groups in Kyrgyzstan, in clear imitation of what has been done in Russia. Events in Ukraine, he said, confirmed his view that such “uncontrolled” activities must be reined in.

Bakir-Uuly also delivered a warning that the euphoria of revolutions did not last.

“Here in Kyrgyzstan we have seen it all. Regardless of how much we fought the regimes of [former presidents Askar] Akaev and [Kurmanbek] Bakiev, more and more people from their circles are making their way back to power,” he said.

Medet Tiulegenov, a lecturer in political science at the American University in Central Asia, said public opinion in Kyrgyzstan was sharply divided.

“If you criticise those who have come to power in Ukraine, you will be labelled a supporter of Russia, while if you condemn Yanukovich… then you’re pro-Western,” he said.

One factor that has strongly influenced Central Asian public opinion is the source of information. Many people in the region watch Moscow TV, and have been alarmed at the talk of fascists roaming Ukraine.

A pensioner in the Kyrgyz capital Bishkek, Lyubov Ilatovskaya, told IWPR that the footage of Kiev reminded her of Berlin at the end of the Second World War.

“It’s the power-hungry opposition that is behind this, and it is bankrolling the unrest,” she said.

Sergei Rasov, a journalist with the online news site Respublika, said people in Kazakstan were not generally drawing direct parallels between Ukraine and their own country. They viewed it as a confrontation between Russia and the West, rather than as a disillusioned population taking on its authoritarian leader.

“These are Russian-speaking citizens of Kazakstan who, despite living in a different country, still regard themselves psychologically as part of Russia. They feel a close affinity with its people and they are worried for Russia; for the future of Crimea, and for the [Russian] navy based in the Black Sea region,” he said.

The Ukrainian unrest was an inspiration for those campaigning against the Kazakstan government’s plan to be part of a future Eurasian Union. This association, planned for 2015, will expand on the current Russia-Belarus-Kazakstan Customs Union and move from trade and economic regulation to something more like political union.

Campaigners held a press conference on March 4 to restate their objections to what they fear will be domination by Moscow. They are also pursuing a second campaign, against the toxic fuel used in rocket launches from the Baikonur site, which Russia leases from Kazakstan.

In Uzbekistan and Turkmenistan, there is no political debate, and public discussion is discouraged. One internet user in Uzbekistan told IWPR that people were discussing Ukraine on the web just as they did the 2011 Arab Spring. He said the debate intensified after a small demonstration in support of the Kiev protesters was staged outside the Ukrainian embassy in Tashkent.

In Turkmenistan, the most isolated of the five Central Asian states, a local journalist said that with extremely limited internet access, the main news source was Moscow television stations, available to people with access to satellite dishes.

Ukraine
Conflict
Connect with us